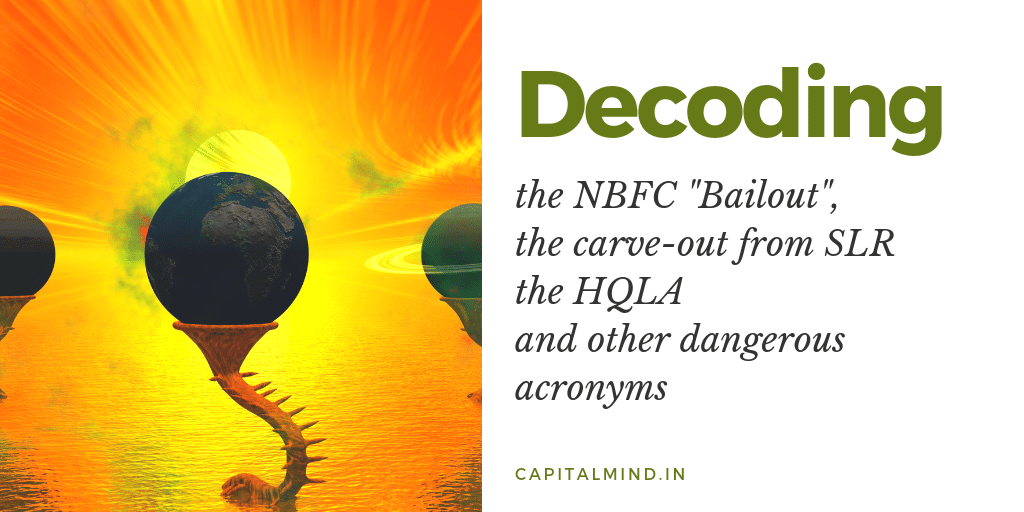 Things have been rough at Non Banking Finance Companies (NBFCs). From September, while the Nifty’s down about 12%, NBFC stocks are down between 15% and 68% (DHFL). The story is simple and complicated at the same time. The point is this: Banks are not lending to NBFCs. Mutual funds are running a little scared since the IL&FS default and are not buying paper from NBFCs – some of it is because they’ve hit sectoral limits, and some of it is fear. NBFCs that have deposits (Bajaj Finance, Shriram Transport) are raising funds that way directly from retail investors offering higher rates of return – Bajaj Finance has upped rates at least twice in October.

But that amount is relatively small, and NBFCs will have to continue to raise from the banking system. RBI has been pushing more liquidity into banks – doing OMOs (buying government bonds from banks) and by multiple repo operations (where banks can get funds at around 6.5% for a relatively short term).

But even then, banks are reluctant to lend to NBFCs. They are a little scared of the “ALM” situation – an Asset Liability Mismatch. Essentially, if a lender lends for the long term, it can’t always fund it by borrowing in the short term – it has to attempt to borrow at least some of its loans longer term. Assuming you can always refinance your short term loans by more short term loans is dangerous, when you can’t.

What happens? Let’s say a lender has a 100 cr. of new home loans of 20 years. Every year, it will get back about 2-5 cr. of principal and around 10 cr. of interest (interest will reduce over time). If it finances these loans by borrowing 50 cr. of short term paper (1 year or less) and 50 cr. of long term paper (10 years), then you have one major problem: What happens when the short term paper matures?

Till now banks offered backup limits for NBFCs. And term loans. And NBFCs would borrow more from the market, and if there was a time gap, use the bank limits to pay back earlier loans and then borrow the money from the market. (A “rollover”) Banks have in fact a 500,000 cr. exposure to NBFCs, and that’s grown substantially in the last few years. 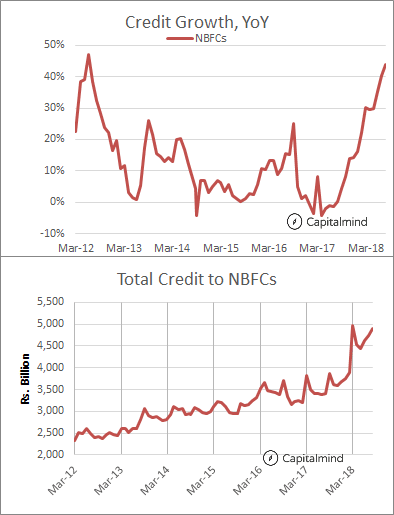 Still, it is a tiny sector compared to, say, Industry, Agriculture, Housing (all of which are move than 2x the amount lent to NBFCs) and even lesser than personal loans made to individuals. 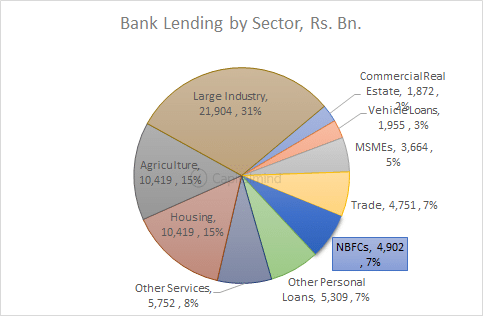 For all of this, the banks have financed NBFCs only Rs. 5 trillion – 6.3% of total bank credit, for performing most of the functions they are themselves doing at a much larger scale. In effect, they finance their own competition – mostly because they don’t want to compete in those areas.

What’s happening now is: Banks aren’t lending or in many cases, even honouring limits. And markets – populated mostly by banks and mutual funds – aren’t letting paper roll over. So the NBFC, if it has cash raised earlier, will use that cash for repayments. But then, no growth. And at some point, that cash will run out. What next?

In Comes The RBI

In 2008 there was a crisis of this sort. And then, mutual funds had stress of redemptions. RBI opened a window in which banks could lend to mutual funds and take the money from RBI, using “SLR” securities.

Then NBFCs too had a liquidity crisis. And RBI opened that window for NBFCs too. This helped them tide over the crisis – there was no major NBFC failure in that time. And today is another kinda-sorta crisis.

But what is it? There’s enough liquidity in the banking system. Just that banks don’t want to lend to NBFCs.

One reason NBFCs don’t want to become banks is: too much regulation. Banks have to do this:

All this ensures g-secs have demand, but at this time the NBFCs are suffering. But let’s see how this LCR business works.

Now let’s take an example of this with Axis bank. 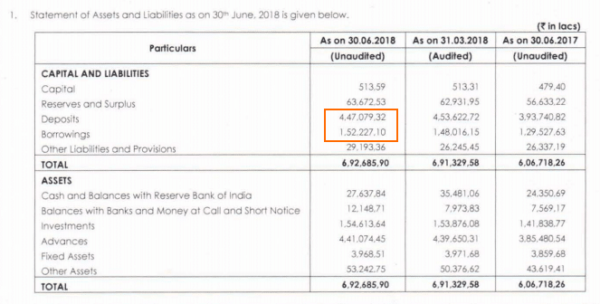 Axis Bank has a Liquidity Coverage Report (link) where it outlines its net cash outflows over the next 30 days. Remember that banks fund themselves with current and savings accounts, most of which can easily vanish on demand, and typically some can (like SME deposits, contingent funding etc.). See the last page: 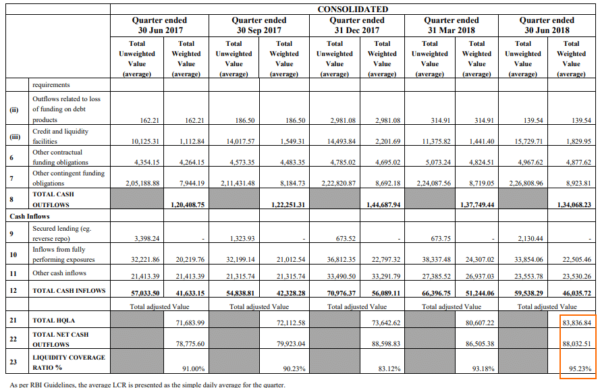 This Net Cash Outflows is based on taking say 10% of volatile deposits, 50% of wholesale deposits etc. and then subtracting cash inflows similarly weighted. Here you can see that Axis needs to maintain 88,000 cr. of LCR.

But they actually have more G-Secs!

Why does Axis Bank Need More LCR then?

The answer is “weird RBI regulations”. (Note: There are reasons. But it’s complicated. Weird is good enough)

You can’t use all your SLR securities to meet the HQLA for the LCR. See, so many acronyms. You might want to read that again.

Meaning just because Axis has 117,000 cr. of g-secs doesn’t mean they can use that to say oh I am meeting the LCR need.

RBI allows only a specific amount to be “carved out” of SLR, for the HQLA number. They started with a carve out of less than 10% of deposits (SLR is 19.5% so less then half of the SLR), and at the end of September, pushed it up to 13% of deposits.

It bought about 5,800 cr. worth G-Secs more – to meet the LCR requireement.

That means now Axis has to have GSecs worth:

That is money it cannot lend out to others. It lends this to the government instead.

The Relief: An Extra “Carve Out” For NBFC Lending

If it wants to nudge banks to lend it has to sometimes give them a reason.

They’ve given them a reason now. A circular today states that

That is a saving of 1,800 cr. of G-Secs that they have effectively taken away from the government and lent to NBFCs.

G-Secs give returns of, say, 7.5% to 8%. NBFCs will easily offer 9.5%+ right now. The extra return goes to the bank and they have freed up money to lend outside the government, even if it’s temporary.

(If they are worried that an NBFC will default, then that’s another thing – but what it seems right now for most NBFCs is that this is a liquidity issue, not one of solvency)

We ascribe rationality to bankers, which in many cases is a gross misjudgement of character. Banks are fearful in India. They hate lending to each other. (Interbank lending is probably a standing joke in treasury divisions) They eye everything with suspicion. And most banks are public sector – so they don’t even want to be known as the guy funding an NBFC.

The benefit of a higher SLR carve out will only work with private banks, and they will also demand more than a pound of flesh. That will however separate the Man-NBFC from the Child-NBFC – people who don’t mind paying a higher rate for a shorter term and who are confident of staying afloat will thrive eventually.

So this “nudge” is nice, but it will need something more direct eventually: an RBI line to NBFCs to borrow, through a bank, backed by G-Secs that the bank holds. That would be a “shove” versus a “nudge”. This is India, so you know what will be needed.

Stronger NBFCs will survive, though they’ll slow down for a bit. They meet the demand banks do not, so eventually if banks keep twiddling thumbs, NBFCs will come back strong.

From RBI, this is a good set of steps. You don’t want to presume a crisis. If it can be solved this way, let it. If it can’t, there are stronger approaches, because NBFCs as a whole cannot be allowed to fail – there are systemic risk consequences, which will be avoided for both economic and political compulsions.

If you’ve read till here, thank you.