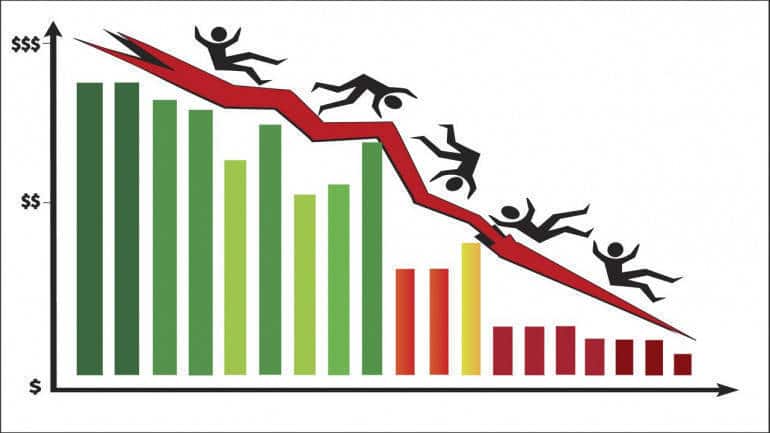 When a stock falls 50% in a day, most of the time, the underlying reason is that the company has issued Bonus shares or the company has gone with a Stock Split. Once in a while, the market decides to reward the shareholders with a 50% drop with no change in their underlying number of shares.

In the United States of America, stocks can fall 99% in a single day without there being any circuit breakers. Thankfully in India, our regulators ensure that rather than see such a drastic revaluation of the company in a single day, its split over a period of time with most of the time the stock opening and closing on the lower circuit.

But there are special stocks where such limits aren’t applicable. Stocks that have Futures and Options and Stocks that are part of Indices have no limits on how much they can fall on any day.

For quite some time, Housing Finance Companies along with Non-Banking Finance Companies and Private Banks have been in high demand owing to better quality of assets compared to Public Sector Banks and superior growth. Companies that used to trade in the low two digit when it came to trailing price to earnings ratio had started to command a much higher number solely on the back of the belief that with that the rot in public sector banks will continue to hamper their growth and if India’s growth story has to sustain, the push has to come from private players.

In just a week or more, things have taken a turn that was barely anticipated and it all started with the default by IL&FS, one of the India’s largest Infrastructure finance company. While the company isn’t really as big to make its failure compare to the Lehman episode, it did impact the money market in a way that other failures haven’t.

Dewan Housing Finance Corporation is one of the smaller housing finance companies listed in the Indian Markets. Last year, the stock caught the attention of investors as it went up by nearly 140%. Since November 2017, the stock was in a time based correction and as early as the start of this month, it was back to hitting all-time highs. 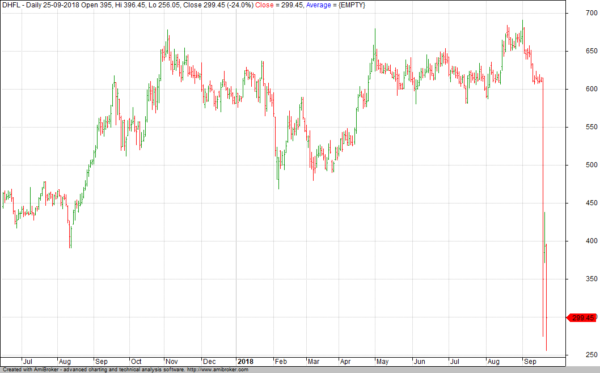 What was gained in a year has been now lost in just over 3 trading days. Such merciless slaughter is generally reserved for companies that are seen as fraud or have come out with astoundingly bad numbers. Neither seems to be case here.

On the bond markets where DHFL trades, there is no major panic that is evident for Interest rates are stable. Even today, the 26th of September 2018, DHFL  SR-II CAT I & II 8.9 NCD 04JU23 (a 5 year bond, approximately) traded at a yield of 9.5%. This is not a panic trade (those would be yields of 15% or more in the wholesale market) Buy when blood is on the streets is a well-known saying. If DHFL is not a fraud and the future growth isn’t compromised, the question that an investor needs to be asking is, what is fuelling this strong fall in prices. Deepak wrote on the same here (Link)

The History of Big Corrections

Every-time market goes through any correction it brings about nightmares about it being a repeat of 2008. This time it has been no different though the bearish sentiment has for now been limited to emerging nations.

In 2003, the stock of Infosys Technologies fell by 26% on a single day as Narayan Murthy while announcing the results reduced the future guidance. On the same day, another stock Mastek fell by 50% thanks to subdued results.

By end of September of the same year, Infosys was trading well above the high before the serious correction set in. The stock never retested those lows and despite the lacklustre growth in recent year is still a 10 bagger for someone who bought the stock on the day prior to the results. 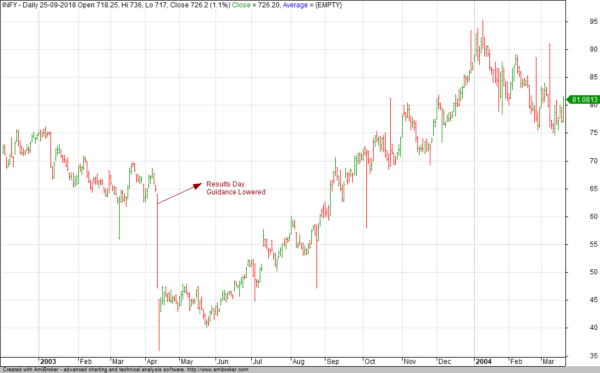 Mastek on the other hand traded barely much above its previous day high and could have been bought around the same price as someone who bought before the fall as recently as 2017.

On Friday, Yes Bank fell by 30% and DHFL fell by 50%. The reason for fall in stock of Yes Bank is easy to understand – when promoters are removed, it can seriously impair the growth of a company and Yes Bank will be no different.

DHFL on the other hand still doesn’t offer us any reasoning for the fall making one wonder whether this is really an opportunity or there is the risk of the unknown that people in the know, know.

One of Warren Buffett’s best trade was in American Express in 1963. It was a distress buy and one that he scooped up investing 40% of his partnership’s assets into one share. Rest, as they say is History. The stock recovered all the losses within a year.

In India, there was the 40% fall in Apollo Tyres in 2013, when they announced they would buy Cooper Tire in the US. That deal fell through and the stock – having fallen from 96 to 60, went straight back to 96 when the deal eventually was cancelled. The opportunity was nothing if you had bought at 96 (unless you consider it’s at 220 today, doubled in five years). But for a one year bet, a near 60% return on the way back was quite an opportunity. (See our article on it)

While we don’t need to invest such a large percentage for we have nothing to prove to others, the million dollar question remains – Is this an opportunity and should we as a retail investor wade into the slush.

We have had too many instances of stocks falling 50% and then going to die. Gitanjali Gems fell two years back, and now is at zero or close. GTL and GTL Infra are both examples of companies in the limelight which are now 80% below the point AFTER they had fallen 40% on one day. There’s many others that are either fraud.

You will not know, in advance, if the stock you buy is a fraud. But the opportunity lies not in V-shaped recoveries, but the margin of safety that a lower price provides if the stocks in’t actualy

Disclaimer: We are not advising a Buy on DHFL or Yes Bank. This post is more of an example on the opportunity or the risk that is being presented in the current market environment.