We come across a large number of interesting stocks in Capitalmind SNAP Outliers, our discovery tool for stocks with momentum. See a video of how Outliers works, and how to use Outliers to find all-time highs. Here’s a stock we found interesting that’s been an outlier. Catch them all here. This stock is not part of the Outliers since its listed on BSE only. But that shouldn’t deny us the opportunity, should it?

Paushak was established in 1972 as part of Alembic group.  Paushak is India’s largest manufacturer of Phosgene based intermediaries with its manufacturing plant situated at Vadodra, Gujarat.The products include Isocyanates, Chloroformates, Substituted Urea, Acid Chlorides etc. The end use of Phosgene is in the area of drugs, insecticides and pigments.

Paushak operates in a niche product area which has a high entry barrier. There are select few companies in the world which have the technical expertise to manufacture these chemicals. Some of the major players in across the globe are BASF, BayerCrop Science, Dow Chemical, PPG Industries, DuPont and Rubican. Manufacturing is limited not because it is  a high-end product that it requires high end expertise but because it is too hazardous that it requires thorough understanding of its handling.
Phosgene came into existence as a weapon in chemical warfare in World War 1. Both Germans and French actively used phosgene (and a similar agent diphosgene) to eliminate the enemies. Though the relative death due to chemical attack was low, but phosgene made a mark as hazardous gas. These criteria make it very difficult for the firms to get license to manufacture it. Any leakages from the plant are considered extremely harmful. According to Paushak,  Global Phosgene industry is about 2 million tonnes and out of which specialty segment servicing pharmaceutical and agrochemicals industries is around 5%. The global industry is expected to grow at the rate of 5-6% for next few years.
Phosgene finds many applications in in dyes, pigments, protein synthesis, adhesives, sealants, insecticides etc. It is also used in manufacturing of TDI and MDI and finds uses in manufacturing of flexible foam and elastomers. Of them, Paushak caters to three segments with its specialty chemicals. 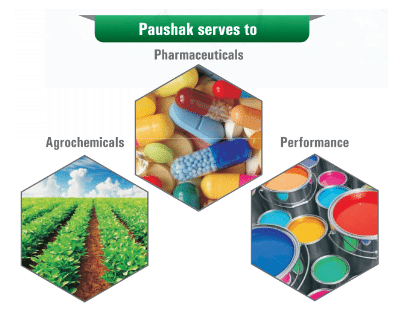 The first sector being pharmaceuticals. Carbonates, chloroformates, isocyanates and organic urea’s are some of the key classes of products which are used in pharma industry. The products under these groups are used in pharma industry for anti-depressant, anti-diabetic, anti-infective, anti-retroviral and cardiovascular drugs. Pharma companies have been the major source of revenue since the beginning. But lately Paushak has explored new areas and got into wider range of products.
Paushak with its products in speciality chemicals mainly caters to dyes and pigment industry. The speciality chemicals division finds its application in textile, paint and coatings along with paper industry. The third segment to which Paushak caters is agriculture. Paushak manufactures insecticides to the agricultural industry and
Paushak has large volume product lines for chloroformates and isocyanates and increased the number of product offerings in agrochemicals last year.

Buyback And Sale of Land

In the first quarter of the current year, Paushak came up with a buyback offer. The buyback was at a price of 1700 per piece. Total size of the buyback was at 21.25 Crs and roughly 3.89% of the total shares outstanding were extinguished in the process.
Apart from the buyback, during the last quarter Paushak has sold a piece of land under its holding for a value of Rs 10.15 Crs. This increases their Earnings Per Share.

Paushak has reported a 5 year CAGR of revenue at 15.56% and profit CAGR at 20%. Most of the growth has come in last year due to capacity expansion and launching of new products in the market.

High entry barrier (in terms of getting license to manufacture Phosgene) prevents most of the firms from competing with the product offerings. Importing of phosgene is also not an easy task either since there are strict rules on global transportation of hazardous chemicals.
Good monsoon and investments in agriculture helps the insecticides industry grow. With better monsoons this year, increase in MSP, loan waivers etc has improved the investment capacity of the farmer in agriculture. Which in turn helps in spending for agrochemicals and insecticides.
Major phosgene producing country being China and Europe. With China cutting down on production of hazardous chemicals and Rupee depreciating, Paushak has the ability to take advantage and become India alternative for global customers. The company has launched new products for first time in India, which earlier were supplied by foreign manufacturers only. Being an established supplier for chemicals for generic pharma companies, the recent pharma sector consolidation will give Paushak access to newer clients and markets.

US is the major destination for Pharma firms, pricing pressure in US for drugs might result in lower off take for Paushak. China being the major disruptive force in phosgenated intermediaries can play a crucial role in pricing if the production takes off after a long slump. Rising crude cost is also a major hiccup in terms of input costs.
As Paushak caters to agriculture sector as well, if the monsoons are not as expected (though last three years have been better), it might pose a significant risk to its insecticides business. As transportation of hazardous material is a major concern globally, any leakage or mishandling might cause a severe dent on the firms prospects.

The promoters own a major chunk of 66.44%. The rest is majorly held by the retail investors (nearly 24.75%). Here the promoters mean two entities the Alembic group and Chirayu Amin family who themselves own Alembic. Alembic group owns 19.07% stake and Chirayu Amin family owns 6.73% and rest is held by trusts and societies. Promoters have not pledged any of their shares. 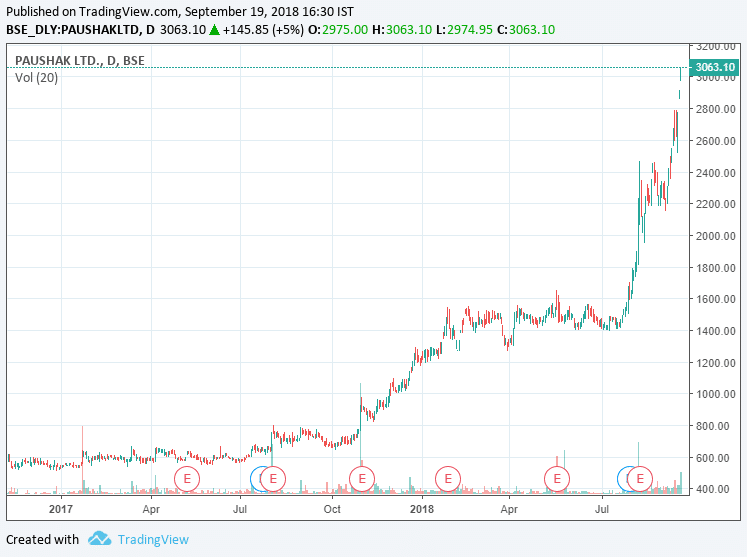 This is a BSE only stock.

NOTE: Please do not consider this article as a recommendation. It is purely for informative purpose only. Authors may have positions in the stocks mentioned, so consider our analysis biased. There is no commercial relationship between Capitalmind and the companies mentioned in this analysis. 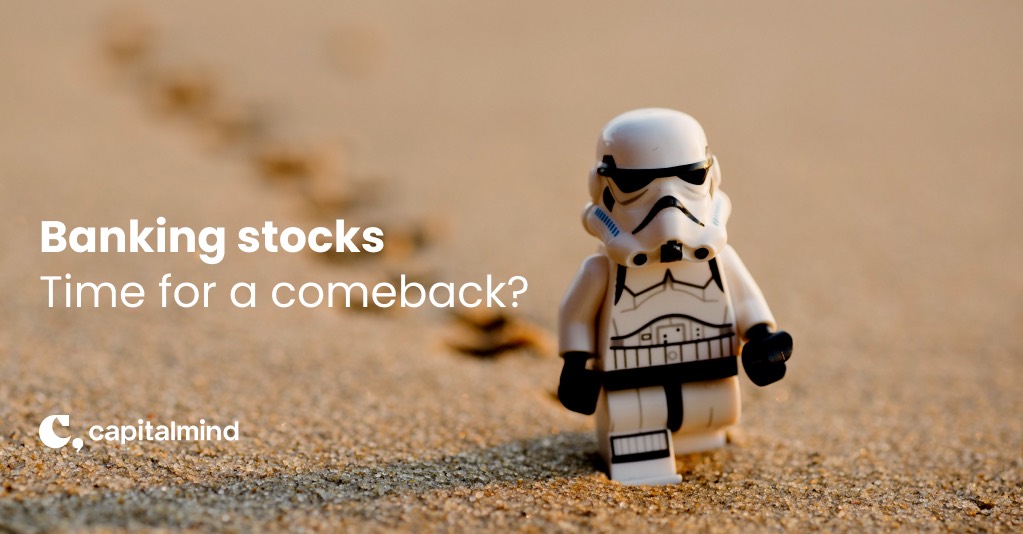 Time for banking stocks to make a comeback?

The era of easy money is behind us. The world is moving from Quantitative Easing to Quantitative Tightening, which we haven’t seen since 2008. All the global ...