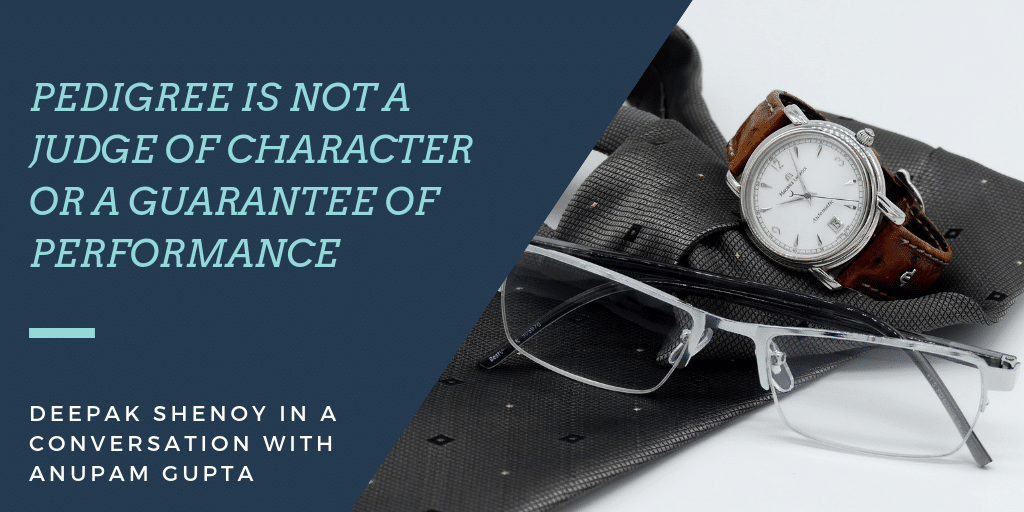 Anupam Gupta and I have been having conversations for years. This time, we made it official. Here’s a Paisa Vaisa podcast episode where I speak about stuff that’s not necessarily about investing, but was fun all the same!

Now I’m also going to present Vashistha’s summary of what I spoke: (From his tweets @uptickr)
In which @b50 extracts ‘hajaar’ gyaan from @deepakshenoy
1. Be flexible. Don’t get married to your initial plans.
2. Pedigree is not a judge of character or a guarantee of performance. Hire people who match your ethics and can give you honest opinions on your decisions.
3. Accept bad news. Don’t take it personally.
4. Don’t get emotionally involved with a company. It’s not gonna love you back.
5. Don’t get too enthusiastic about a stock others are excited about. Don’t be too skeptical of stocks that are going up w/out any apparent reason.
6. The classic rookie mistake: sell when your stock goes up say 20%. Hold on to it if it falls 20%.
7. The more rigid you are about an investing style, the more angry you’ll be when other styles make money and you don’t.
8. Be clear why you’re buying a stock. Revisit that philosophy often.
9. React to evidence of growth. Don’t act on only projections.
10. There’s a huge gap between valuations of private vs public companies. They will approach some balance over the next 10 years.
11. Last 10yrs, economy grew at roughly 14%. The top quartile of mutual funds returned roughly 16%. So a 2% alpha over the economy. Next 10 years? Say economy grows at 7% + inflation of 5% = 12%. Add 2% alpha for the top quartile MFs => moderate return expectation to 14%
12. Opportunities => Think of a growing India… what kind of companies will create jobs? Manufacturing etc. Which kind of markets don’t have any large companies? For example: kid’s products. Our infrastructure is nowhere near where most western countries are at.
13. Startups => Companies that have changed behaviour. Ola, Swiggy/Zomato, Flipkart/Amazon. In FinTech, PayTM. Lot of lending startups who don’t know what they’re doing. Pivots: Instamojo is moving into lending, some day MakeMyTrip will finance holidays?
Do connect at @deepakshenoy with your thoughts!