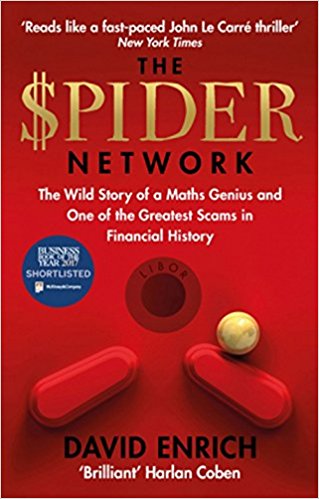 At Capitalmind, we love reading books. As part of a new Initiative, we shall come out with short briefs on books we have read. Honest reviews just like you would expect from us.
In the movie adaptation of the Michael Lewis Book, “The Big Short”, the movie ends with an interesting revelation.
In the years that followed, hundreds of bankers and rating-agency executives went to jail. The SEC was completely overhauled, and Congress had no choice but to break up the big banks and regulate the mortgage and derivative industries. Just kidding! Banks took the money the American people gave them, and used it to pay themselves huge bonuses, and lobby the Congress to kill big reform. And then they blamed immigrants and poor people, and this time even teachers! And when all was said and done, only one single banker went to jail this poor schmuck!
That poor schmuck was Kareem Serageldin, an executive at Credit Suisse who was the only banker to be convicted of the financial crisis. A crisis that brought the biggest nation to it knees and only one guy ended up pleading guilty. Think about it.
This book is about a scandal that wasn’t as exciting as the Mortgage Crisis of 2007 / 08. LIBOR, the London Interbank Overnight Rate, was a benchmark for loans all over the world, and the scandal was about how traders manipulated.
Very few outside the circle even understood what LIBOR was all about, let alone the implications of moving a “bip” or two either way from where it was supposed to be at. While its easy to blame traders for the greed and recklessness, the issue with LIBOR was and is about how much it costs a bank to borrow. During the financial crisis, Banks were barely lending to each other due to fear of not knowing who shall survive and who shall not and any bank that showcased a higher borrowing rate which may have been correct would have been like screaming fire in a closed room. Every other trader would then be happy to add gasoline and push it over the edge. This meant that most banks were happy to use a reference rate that seemed close to what others were portraying to make it seem all is well and if during the process, it makes a few of their traders happy and bank richer by a few million dollars, Why not?
The Spider Network is the Biography of one person who was awarded the longest jail sentence for a white collar crime in Britain – Tom Hayes.
Books on real life scams and mistakes that have attained larger than life role in the public mind share are always interesting reads and this is one such book. While books such as Rogue Trader by Nick Neelson, Hedge Hogs by Barbara T. Dreyfuss and When Genius failed by Roger Lowenstein provide descriptions on the action of the individual and firms which got embroiled in scams of a humongous nature and one that bankrupted the organization, The Spider Network deals with the actions of a single trader who while not entirely faultless ends up ends up as the fall guy.
In 2008, the bank Société Générale lost approximately €4.9 billion which was blamed on a single trader –  Jérôme Kerviel, a 30 year old trader of the Bank. It’s interesting that not only does he allege that his superiors knew of his trading activities, and that the practice was very common.
The case of Tom Hayes reeks of similarities though here most banks ended up profiting in millions thanks to his skills – trading and ability to influence the prices of the asset that in turn was the key to those profits. In this case, its portrayed that not only did his supervisors and higher ups knew what he was up to, but actually tried to aid him as much as possible. Worse, the practice was common among almost all banks across continents and yet most got away scot free making it doubly depressing.
Trading is a tough profession on an Individual level, being a Trader for a Bank brings its own set of pressures given the amount of capital that is provided to even entry level traders. With Salary, Bonus and the very job dependent on their ability to bring big bucks to the bank, it’s not surprising to learn that they try every trick in the book – from bending the law to in places breaking it to meet their objectives.
The fall guys end up as fall guys because of the fact that when the scandal blows open, everyone wants a villain who can be conveniently blamed for the entire mess. For the rest of the team its business as usual till the next time something similar takes place.
At 496 pages, the book isn’t an easy read especially given the number of people who are referenced throughout. But condensing it could have meant losing out on context that is paramount to the understanding of how the game was played and rigged. While LIBOR has seen changes including better oversight, the fact that Banks being on both sides – provider of the input that goes into LIBOR as well as trading on the Interest Rate changes means that there is always a arbitrage present even though it has become tougher than before to exploit it.
I rate it 4 / 5.
Check the book out on
a) Amazon or
b) Infibeam