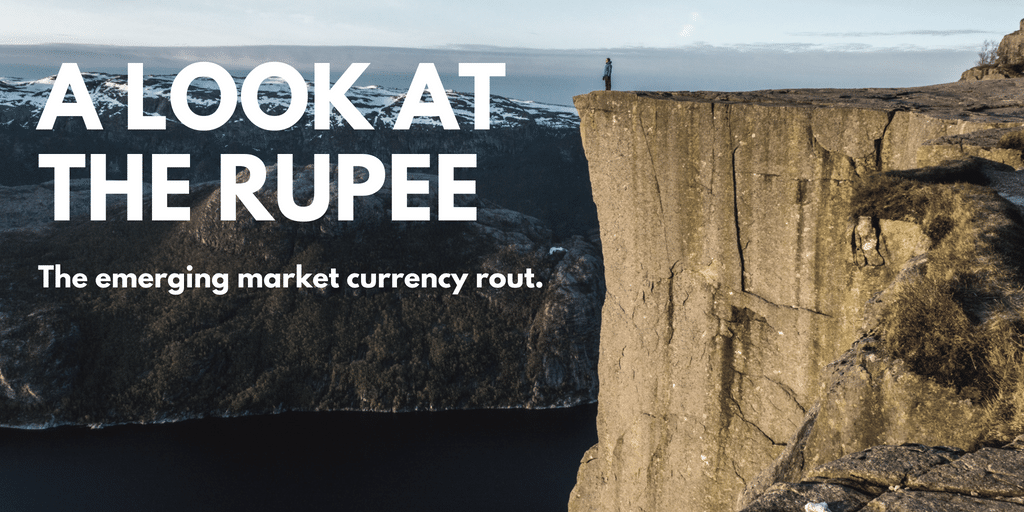 The rupee has just gone again to that evil level of 69. It seems to be almost itching to break out. 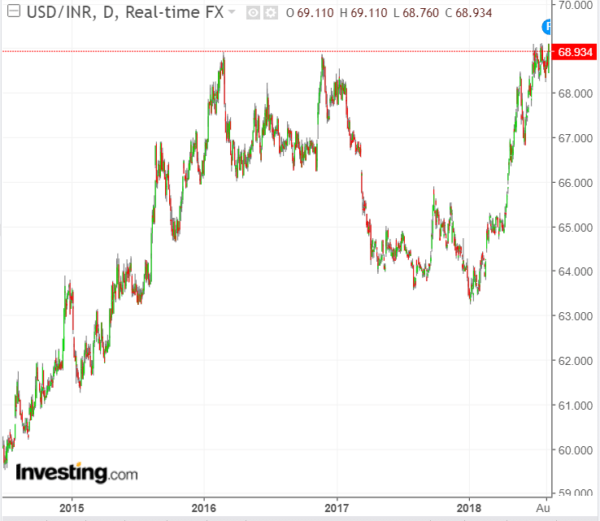 Which, in comparison with the damage on other BRICS currencies, isn’t too bad (in 2018) 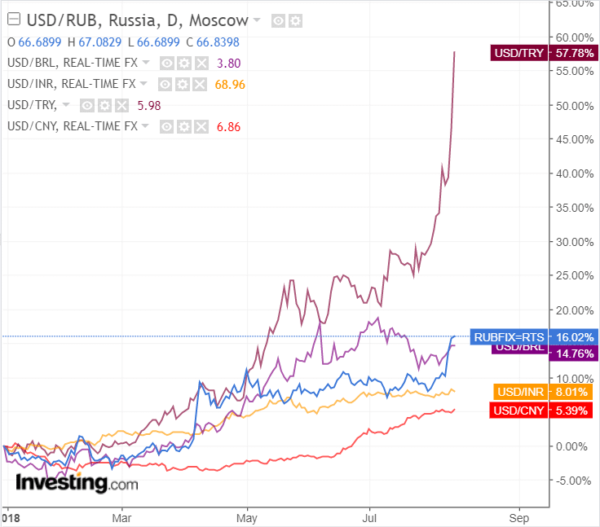 As you can imagine, Brazil, Russia and Turkey are far worse in the currency depreciation road this year. And have been for the last five years – more than 100% depreciation in the Lira and the Ruble since 2013, and the Brazilian Real has hurt 83%. The rupee, meanwhile, is only down 8% in 2018 and only 25% since 2013.

India’s Been Trying To Defend It

The RBI has been trying hard to sell dollars it owns, in order to protect the rupee. Firstly check out how much the forex reserves have changed in 2018. How much of these are actual sales? Some of the fall is due to other currencies (Yen, Pound, Euro) that we hold, against the dollar. The Euro and Pound have fallen about 4% in 2018 against the dollar, though the Yen has appreciated 3%.
But we do get data, 2 months late, on how the RBI has actually traded. The underlying trades against the USD show that in May and June, the RBI sold dollars heavily: 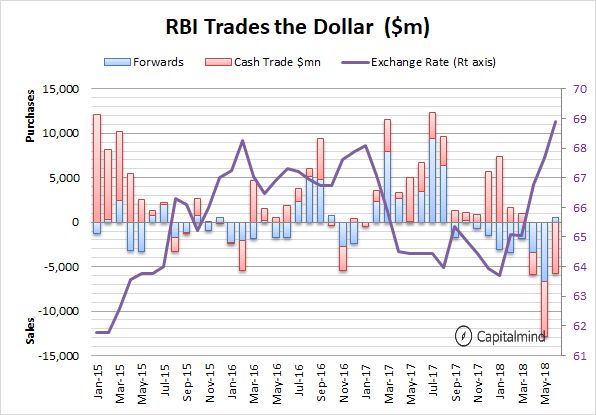 Much of this is to protect the rupee from sliding. For some reason, the RBI has been keeping tabs on the level of 69 – and even on friday they seem to have heavily bought the rupee (sold the dollar) in order to maintain the levels. Why would they do this when other countries are seeing heavy depreciation?
This is usually done because India is a net importer, of crude and gold mainly. You’ll only increase inflation if the rupee slides further. However there’s a limit – the world markets are too strong to let India alone while everything else is falling. China has further hit their currency on Monday, taking the USDCNY to the highest level in a year. (Meaning their currency has depreciated too)

Turkey is the world’s 8th largest producer of steel. Russia is the 5th largest.

And while Turkey is not a big exporter of steel, Russia is: 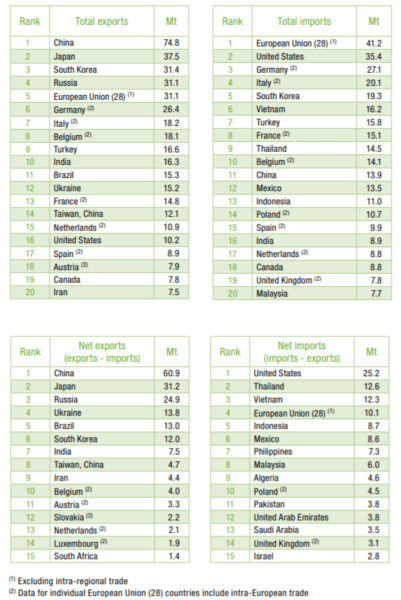 Source for both: worldsteel.org.
Russia is the world’s third largest net exporter of steel and its currency has fallen over 17% in 2018 and is falling more.
The last time it saw a big depreciation (nearly 100% in 2014) it cut the price of steel so much that the world followed through and that resulted in a massive steel crisis in India. Now, India’s also a net exporter of steel, though after Russia and Brazil. Will the next series of steel price cuts start soon? Will this mean that if India’s currency remains where it is, we can’t do our exports (and will have to deal with another round of lower priced imports?)
Remember it’s totally fair for Russia to cut prices in dollar terms because their costs are in rubles. They don’t import much ore and are mostly blast furnace driven, so it’s not like they have increases in their cost of production. I expect that most metals will see a price change in the later part of this year.
Why is steel important? We have just seen a major improvement in that sector, which has been a huge NPA hit on all banks. Banks will balk at another hit to what has been a miraculous recovery in the last year; especially with another set of power NPAs looking to hit them soon. India’s different, but sometimes it isn’t.

I think the rupee will fall. To Where? I wish I knew. But it doesn’t look like 70 is too far from here, or indeed 75. The rupee depreciates in “spikes” every few years. With an average of 4%  a year. It’s been about five years since the last spike. So even a 20% move is not illogical, though some fundamentals have changed (we have lower inflation).  I however don’t expect it to happen overnight like Turkey. It might be more slow or controlled.
A falling currency is of course great for exports. IT in India should do well for instance.
However the bond market might complain because hey, we need to attract inflows and raising rates is one way RBI always tries to bolster them. Last time, it did an NRI deposit thingy to bring in over 30-40 billion dollars in a short span – this time, if they do it, it will be even bigger. But to do that meaningfully, rates have to be high, so the bond market will sulk. Your longer term bond funds will just get even more longer term.
Bonds get hit, then banks get hit. They’re kinda linked. And then everyone that borrows gets hit.
As for the stock market, nothing makes it fall nowadays. Therefore there’s no point predicting it. Let’s just say the most insane valuations already exist in many stocks, and people are screaming “quality” as it drips off a knife that says 105 P/E. You don’t argue with this. You follow the trend, whichever way it goes.
The macro is never important until it is.