In September of 2013, the BJP selected Narendra Modi to become the Prime ministerial Candidate for the forthcoming elections. This was no surprise given that he had just a few months back won a fight against the party patriarch to become the head of Bharatiya Janata Party’s election campaign committee.
By what could not be really called a co-incidence, the markets bottomed out right before his anointment to the high post. Over the next 5 years, Nifty has been able to reach new heights and has more than doubled from its starting point.
When a stock doubles in price, it’s either because its earnings have doubled or because the valuation investors are willing to pay as double or a mix of the two – some part explained by earnings growth and some part explained by growth in valuation also called “Price Earnings Rerating”.
If a Company shows earnings growth of 20% for the year while its stock price too has moved 20%, it essentially means that the stock despite being higher by 20% is still valued at exactly how much it was last year (same P/E, higher earnings).
If a Company shows earnings growth of 20% for the year while its stock price moves up by 40%, the stock price move is partly explained by the earnings momentum and partly by the change of valuation.
If a Company has no earnings growth for the year and yet the stock price has gone up by say 20%, the stock is now expensive by 20% than what it was last year.
Finally, if a Company shows earnings growth of 20% but stock price falls by 20%, the sock is essentially cheaper by 40% compared to its previous valuation.
Theoretically, this would be a wrong way to analyse companies since the reason for each company could be different. A company that has seen earnings decline while valuations didn’t which makes it more expensive maybe going through a short term phase of under-performance in which case, markets are correctly ignoring the decline in earnings.
Or there could be one off earnings that shoots up the earnings of a company but since markets knows that this is a one-off, valuations wouldn’t change.
While markets are not efficient in the short term, they are very much efficient in the long term. This attitude of markets mean that while it may be incorrect to look at just change in earnings and valuations versus price change when it comes to individual companies, when it comes to the market as a whole, this can give us a better perspective of the strength of the market.
This study was done to better understand whether stocks as whole have been driven higher due to earnings or have they been driven more by valuation changes. We compared companies reporting earnings in year ending March 2013 versus March 2018 and their comparative valuations and price changes.
As with any study, there are limitations to this. We started off with only companies that are listed on the National Stock Exchange. Secondly, we excluded all companies that were having negative earnings either in the year 2013 or 2018. We have also ignored companies that are yet to come out with their earnings for year ended March 2018.
The result of all these exclusions left us with 195 companies that we could then go ahead with. All Earnings per Share and Nominal Stock price have been adjusted for Corporate Actions if any.
Results in Tabular Format:

The broad trend looks pretty good. Majority of the stocks have seen a positive change in Earnings, Valuation and Price. But this alone doesn’t give us a complete picture.
For example, while we have seen 37 companies who have earned in year ending March 2018, earnings below what they earned in 2013, just 6 companies seem to have shown a decline in price and since this is higher level data, we cannot even be sure whether the 6 companies are those that have seen earnings decline as well.
While this is a snapshot point to point data, the basic idea is to see the correlation between change in Earnings per Share, Price to Earnings and the Nominal price of the Stock.
As many as 131 companies have seen their earnings increase, their valuation increase and the price increase though not exactly in proportion. The same is listed below.

On the other hand, the number of companies that had a negative change for all factors was just one – McLeod Russel

25 companies saw their earnings increase while valuation became cheaper. These are what one can call are experiencing time based correction in value terms. 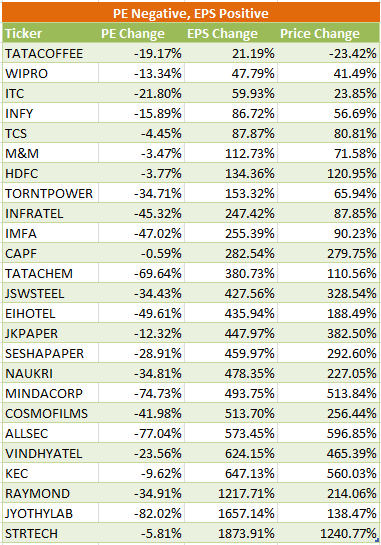 Finally, we have 35 companies that have seen their Price to Earnings increase even as their Earnings has gone down. 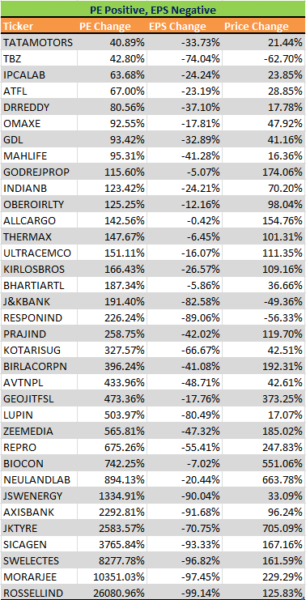 So, given the data, what can be summarize?

Unfortunately that is the tougher question that is not easy to answer.  Each stock could have its own reasoning for going up in terms of price or valuation even when earnings aren’t there. There could be a capex investment which would be coming up in the coming quarters and one that could boost earnings, the drop in earnings this year around could be due to a one off adjustment among a lot others.
The markets overall has been expecting a mean reversion when it comes to earnings with the price to earnings ratio of the Indices itself being at multi year highs with no indication of there being a fear of a drop unlike the last time around.
When Apple hit Trillion Dollar Market Capitalization, it did with a Price to Earnings ratio being just below the 18 mark. Quality companies in India which aren’t even growing at any such pace are valued at many multiples of that.
Unreasonably high valuations aren’t sustainable. Most stocks with valuations way higher than what they should command given their growth ratio’s may not crash in price but could easily go through a time based correction as we have seen multiple times in the past.
With elections around the corner and no major policy on the anvil, it would be interesting to see how far the rubber band would stretch before the break. Or maybe markets are right and earnings will mean-revert making stocks less expensive than what they seem to be. The jury on this is still out.