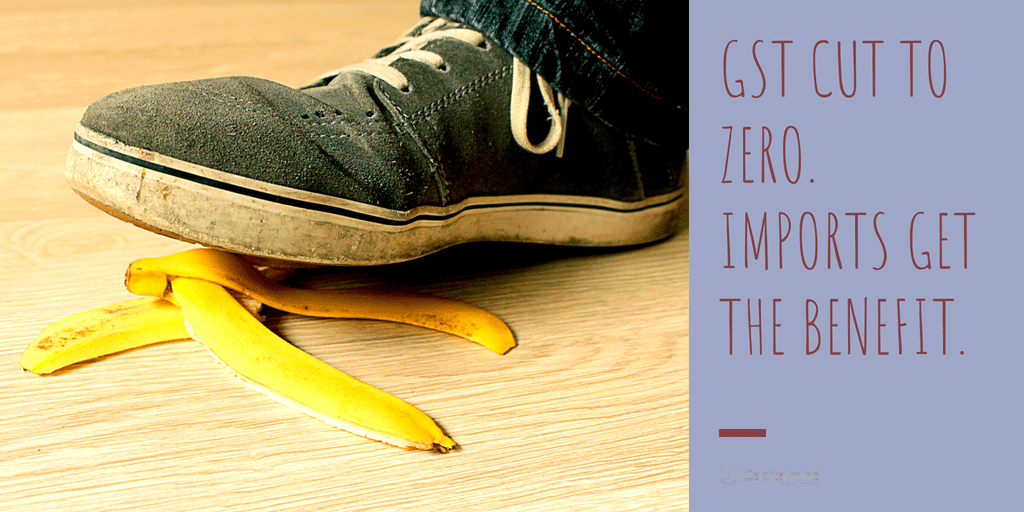 The government finally made 0% duty for Sanitary pads. This is after much demand, back and forth, of this particular tax cut. But the road to hell is paved by GST, apparently.

There seems to be some confusion about Sanitary pads going exempt but lack of input tax credit will make them raise prices. That seems incorrect according to me. I’ll try to explain. (Based on my “tweetstorm“)

The government decides to say my product is GST exempt. Now what?

So, the new logic, assuming I still want to make Rs. 30 profit:

Prices Fell! But Not So Much

What if I pay 18% on my inputs, but had to charge 12% on my output? This is an inverted duty structure.

If the product becomes GST Free:

You’ll notice that the selling price change depends on the profit I make and my input GST. But it is also true that it’s almost never likely to be that I have to raise prices very much — to keep the same profit.

What Happens to Pads?

Because that’s not how GST is structureed.

The inputs have GST. From a government release, it appears that there’s inputs at 18% (absorbent polymer, glue) and some at 12% (pulp, release paper). These might not add up to a substantial part of the cost: there will be packaging costs, transportation, electricity, machinery and so on. These have GST on them which has to be included in the costing of the product.

Now, none of that needs to be paid on transfer because the product being transferred has no GST.

Regardless, the math shows you one thing: The prices of sanitary pads may not go up. But they won’t fall much either.

But Hey: It Becomes Cheaper To Import

Let’s say I make sanitary pads in Sri Lanka. And export to India. The Sri Lankan (or most others) government typically refunds the input taxes of an exporter.

(*Note: There’s a “basic customs duty” of 10% from most countries, but a number of ASEAN and SAARC countries have a free trade agreement with India where their products only get charged the GST, not the basic customs duty. In Srilanka’s case, the sanitary pad has been a zero duty item (link) in the agreement, but this might have changed since. Plus there’s freight, insurance and other costs associated with imports. Some countries subsidize their exporters so they might counter the costs of transport etc.)

I can export to India and sell at Rs. 100. India has the concept that if something’s charged GST in India, the imported item will be charged the same duty, just to keep things sane.

The Madness: Importing From Yourself is Actually More Efficient

Think of it: the foreign government refunds input duties so I can still make the same margin here and sell at 9% lower (Indian manufacturer’s price was Rs. 109, remember).

It’s so complex that even India is supposed to refund the GST of an exporter. Technically, it would be most efficient to put a ship outside Mumbai, send sanitary pads to that ship (as an export) and immediately reimport it back paying no duty.

This is one way you can sell at Rs. 100 and maintain your margins.

And the price also falls, so everyone’s happy.

So What’s Going To Happen?

Well, we’ll just get cheaper imports. And if you’re considering setting up a factory to make Sanitary pads for India, consider Sri Lanka.
If we banned imports altogether, then you’ll see a minor drop in the price, not much more.