Every year, the Association of Mutual Funds in India releases the “Consolidated data on Commission and Expenses paid to Distributors during the previous financial year”. The data for FY 2017 – 18 is now out and in this post we shall take cursory look at the same.
The total amount of commission distributed by asset management companies for the year came to 8,533 Crores. Since the list ignores those distributors who don’t meet the minimum, it could be a bit more.
The AMFI list (Link) provides data for 979 entities of which the top 100 entities make 80% of the commission.
Banks are a major seller of Mutual funds with many of them generating large incomes from selling their own funds. In a way, this is clear conflict of interest even though there could be a “Chinese Wall” between the Bank and the Asset Management Company. 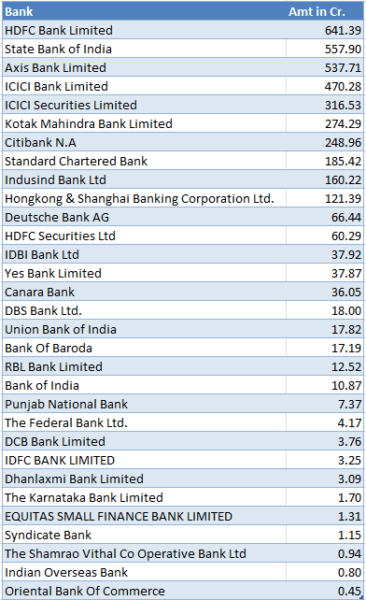 What is surprising is the fact that SBI is closing in and fast on HDFC Bank. While HDFC Bank is well known for its hard push to sell other products, it’s surprising that SBI has been able to take advantage of the booming stock markets to sell more mutual funds that they had done last year.
The Top 20 from non-banks are dominated by companies which have a very high distributor network. Wealth Management firms and Brokerage houses are the other style of firms that complete the list 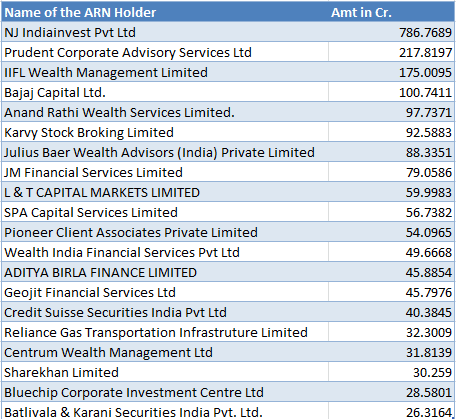 While “mutual fund sahi hai” campaign may have given a boost to collections, not everyone had a positive year. In fact, of the 980 ARN holders who are listed, as many as 168 lost assets in the year.
Here is the list of the top 20 of them And the list of top 20 asset growers for the year 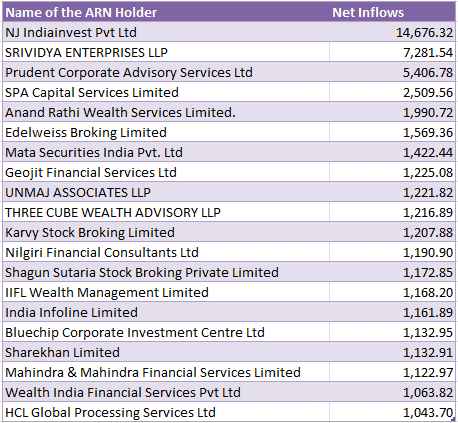 While most of the names can be recognized, the second name in the list is a surprise. This is a company which was founded in 2016 by Bhakti Manoj Modi and Smita Manoj Modi. Manoj Modi is said to be the right hand man of Mukesh Ambani which makes this number doubly interesting.
The Median fee ratio across all of them is 0.98%. But there are a few surprises here as well. Money Palm Realty Pvt Ltd for instance had average asset under management of Rs.5 Crores and yet managed to earn 63 Laksh as commission of the year. That amounts to 12.50% of the Assets.
The top 20 outliers from the list 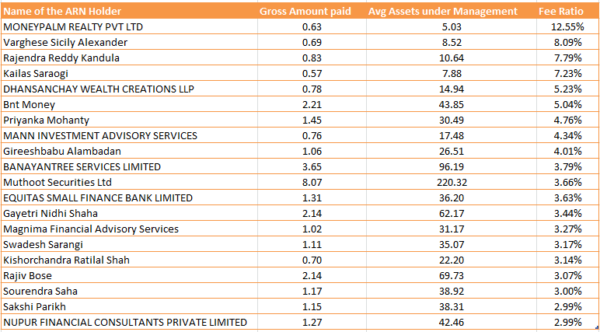 While such data makes for interesting reading, nothing much can be gleamed out of it. Mutual funds are a push products and the only way to push is to provide commission that can make the effort worthwhile.
Fees eats into one’s returns and in the long term can make a substantial impact. When the bull markets are in full swing, very less attention is paid to such fees but if we were to get into a range bound markets like every other markets has, the damage can be significant, especially with funds starting to find it tough to generate consistent alpha.
As an investor, it’s not like you shouldn’t pay a commission – but you should that of your investments, someone’s earning a commission if the fund you bought isn’t named “Direct”. As long as you’re aware and you’re fine, there’s no problem.
Also read: How much are you paying your mutual funds in commissions?