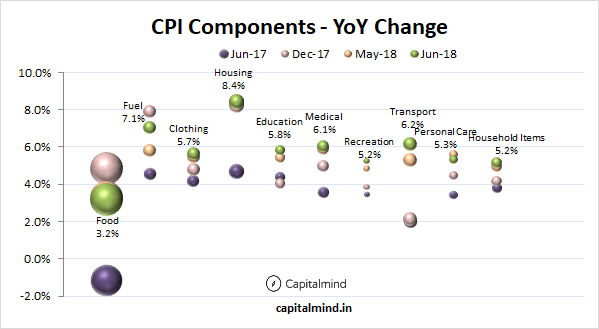 Here’s a headline you might not read. Inflation came in at 5% for June 2018, but we have something really important happening in the details.
The “core” inflation is the problem. We know that food prices are volatile. We know that fuel prices are volatile. What if we considered items that aren’t food or fuel? That would be the real underlying inflation in the economy. Think of it as prices of onions or chicken, versus the price of a chicken gravy at a restaurant. The second one is most likely to go up more slowly, but when it does go up, it stays up.
And that is “core” inflation – scary when it is going up. And it is going up. 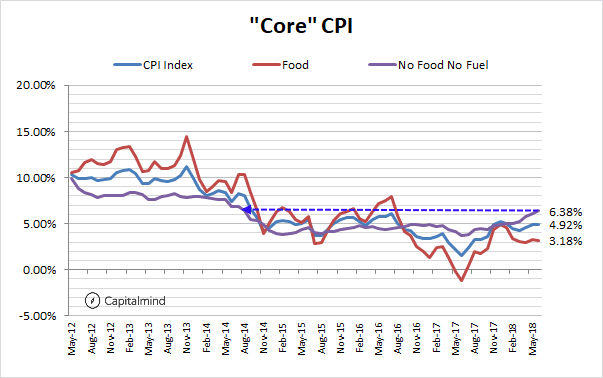 This is the highest such number since 2014.
And where does it come from? Apparently, everywhere except food!

As you can see, nearly everything is at the top – the green bars represent Jun 2018.
Overall, inflation doesn’t look too bad, though. Here’s what it looks like as the general index (including food and fuel): 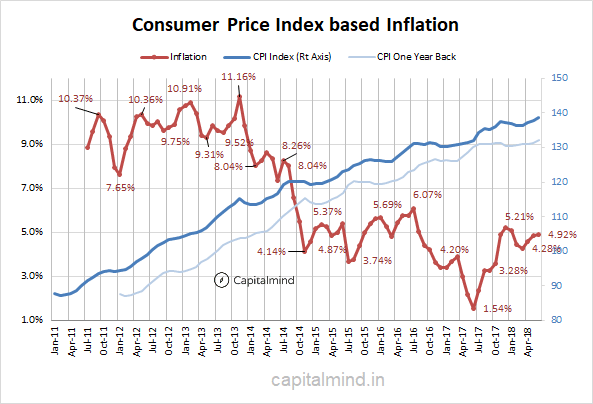 The chart hides a bunch of details, like the core inflation concept.
This is probably why we are likely to see more rate hikes. Food inflation is only 3% but that is flaky – when that rises (as it usually does in the latter part of a year) it will spike up overall inflation numbers too. We should expect some more weakness in bond markets in the coming months, especially with rising MSPs and higher crude prices combined with a weakening rupee.