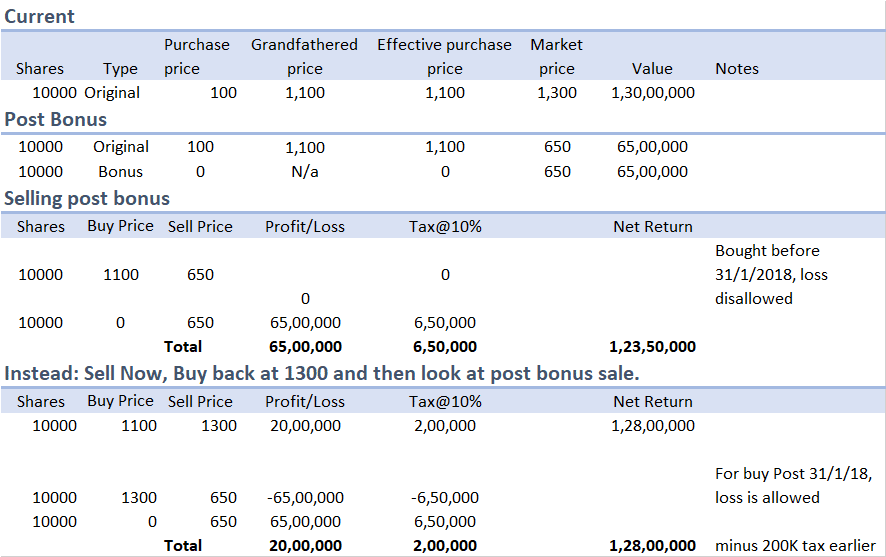 The concept of bonus shares is weirdly fascinating. It’s just the moving of something from one account in the books to another. It’s total nonsense from an accounting perspective – it does nothing to increase the value of a company, and therefore, it adds nothing to the value of a shareholder.

And now, its actually a problem for long term owners of stock. Because of the peculiar nature of the recent stock law that brings about long term capital gains taxes. The bonus will just increase your tax especially if you sell in the near future.

For bonus shares, the purchase price is zero.

Consider now that a company is offering a bonus now, 1:1. You get one new share for a share you own. Let’s say you’ve held that share for a long time, more than a year now.

When you get a bonus share the income tax rules are that you have two shares:

After the bonus, the share will fall to Rs. 650 because the current price of Rs. 1300 will be split into two shares.

What if you decide to sell shares soon?

Let’s say in a year or so, the stock stays at Rs. 650 (after the bonus) and you want to sell both your shares. How does the tax system work?

Effectively you have a Rs. 650 profit on one share, and a Rs. 450 loss on the other which you aren’t allowed.

What if there was no bonus? Does the profit or tax change?

Can you do something about it?

That’s not something desirable.

So, if you don’t mind some tax outflow, you might have to do this: Sell your shares and buy them back a few days later. (Even before the bonus is fine)

You could in fact further avoid the tax. After the bonus, sell about 3% of your holding at the half price, and you will get a loss (since it’s the pre-bonus shares that are being sold) and that will negate your profit, so no tax payable either. If you’re a stickler for the position, buy back the 3% position again, three days later, and there’s no taxation involved.

But Tax Outflow and Transaction Costs

Then you have the tax on the current profit that you’re booking.

So it might not be worth it – just pay the tax when you do exit.

This Tax Differential Reduces As The Stock Goes Up, Though.

Let’s say the stock doubles over a year. Then, there will be no tax differential between a process of selling now and buying back, and holding on for a year. Because the differential comes because of the lack of tax-recognition of a loss. And if the stock doubles, there’s no loss on either tranche – the original or the bonus share.

Bonus issues are a pain for you if you are a long term investor looking to exit soon. If so, it’s better to exit now and enter again later.

This might be valid for FII investors who might need to be considering exits, since they are taxed like Indian individuals. For mutual funds and other domestic institutions, there’s no tax, so they don’t care either ways.

If you however continue to believe that the stock you hold will double, then don’t do anything.

If you want to exit only a small part of your holding,then wait till the bonus happens. You may not get the credit of a loss, but you won’t have to pay any tax either. (If you exit pre-bonus, there is a tax since there is a small profit)

Lastly, if you’re looking to totally exit in a year or so, you might just consider selling and buying back as above.

This is super complicated. Unnecessarily so because of the tax laws. There’s a saying that only two things are constant: Death and Taxes. And like in this case, Death because of Taxes.