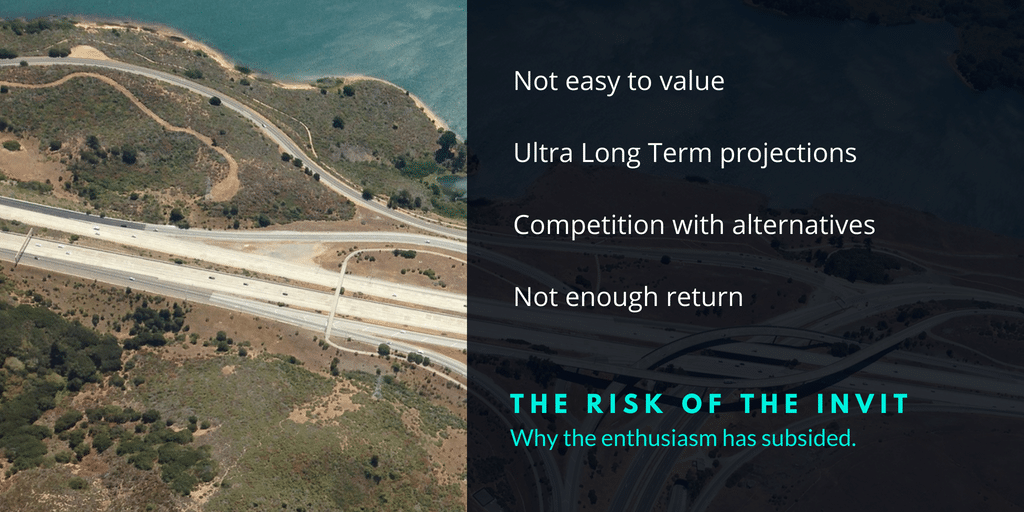 One of the most anticipated non-equity public issue in 2017 was of IRB Invit Bonds. This was supposed to herald a new way for Infrastructure and Real Estate firms to raise capital by way of securitizing their long term assets such as Roads.
IRB was the first company to take advantage of the passing of SEBI (Infrastructure Investment Trusts) Regulations, 2014. Investors queued up for a chunk of the piece and the issue was over-subscribed. India Grid Trust by Sterlite Power followed up with a Public Issue of its own.
Rather than being the beginning, the story has really ended even before it properly started. Before we go further, lets us try to understand what these Bonds were in the first place and why it’s a great idea in theory but one that can come off the hinges in reality.

Invit, short for Infrastructure Investment Trust, was born thanks to passage of a change to the SEBI Act. The key idea was to provide an exit route for Infrastructure companies. Infrastructure companies bid road projects on Build – Own – Operate – Transfer basis which meant that their funds were locked up for a long time. An infra company would build a road, by creating an “SPV” – a special purpose vehicle, essentially a ring-fenced subsidiary company, which would get financing from banks. The road would be built, then toll collected for a ‘concession’ period, and that would pay back the loan principal and interest over time, and the developer would get a decent return. Then the road would become public.
Most infrastructure companies that bid for such road projects weren’t highly capitalized which meant that most projects were completed with majority of the investment coming via Long Term Loans. While this allowed them to bid for large projects, once complete with no immediate return of capital, the ability to bid and get new projects suffered. They would basically not be able to collect on the old projects, and thus not have enough capital to invest in a new project. (Any project needs equity and debt. The developer puts up the money as equity, and then banks lend the rest. But without a decent equity:debt ratio, no one lends)
Indian Roads Congress (IRC) which comes under the Ministry of Road Transport & Highways has guidelines on forecasting of traffic. Based on the assumed forecast and the toll fee they could collect, Infrastructure companies bid in Roadway projects offered by NHAI.
Companies could start collecting toll fee from the day the project was completed which meant that the faster they completed a project, faster would be the ability to start seeing returns generated from the said project.
If all things go well, not only were Infrastructure companies compensated in terms of a good profit for the project completion but also able to clear the loans using the proceeds from the toll fee collected.
But there was a catch. This is a business that is not only exposed to risks in the nature of delays due to factors like Land Acquisition but also risks of aggressive bidding to get the project at all costs. Infra companies bid hard to get the contracts, and then, struggled to recover money. And with money stuck, the companies couldn’t bid for more projects. Bankers too had to find a way to not let this become an NPA.
In a way, Investment Trusts were a way out of the mess. Sell the “SPVs” to a trust, which is financed by the INVIT IPO offering. The Invit investors get the cash flow of all these assets over long periods of time. The money received by the owners of the SPV (say, IRB Infra) will then pay back the bankers.
Great, especially since Banks were starting to come under strain and if infrastructure projects of weak companies could be sold off to Investors, Banks could get an exit without the need for haircuts.
Unfortunately or fortunately depending on which side of the fence you are, we have had just 2 such issues. IRB Infra’s IRBINVIT and Sterlite’s INDIAGRID.
Real Estate Investment Trusts are a big thing outside India. In US, REIT’s own approximately $3 trillion in Gross Assets. More than 100 REIT’s are listed in US markets alone. London, Singapore are among the other major cities with listed REIT’s.

So, why has it failed to get huge here?

It’s too early to say it’s totally failed, but Invits have some issues.
In simple words, there is a lack of transparency. And the risk of failure is transferred to investors, over a long period of time. The investors have no easy way to understand this risk – after all, projections of cash flow are just that: projections. If traffic projections for next ‘n’ number of years which is being used to justify doesn’t come true, the returns will be in a mess. And those projections aren’t viable, we’ll come to that.
But the bigger issues are elsewhere – the fact that the investors have no real idea of how much the projects are really worth.
Yes, the sponsor company does come out with a Valuation Report that suggests that the project will generate a certain amount of returns over the period of the license subject to a growing traffic and toll fee collection.  This is from a reputed valuation company. But if that valuator is paid by the company, it doesn’t take much to guess as to why way the report will sway.
Add to it, longer the term of the project, greater the risks. Take for example the Tollway that connects Bangalore International Airport with the city. The project was won by Navayuga Devanahalli Tollway Private Limited which created the road to ensure a signal free highway.
With this being the only approach road to the Airport, users have no alternative but to pay and proceed. But there’s a twist! Recently, the Government of Karnataka has constructed an alternative which is toll free. While the company will continue to operate the highway for a significant period of time, all projections of traffic now go for a toss. Soon, there will be a metro, and that will also change projections. How could a road company know, in advance, that all this will happen? Projections remain on paper only. The longer the time frame, the higher the risk of something else happening.
In 2015, L&T defaulted on paying off on two roads since alternative road got build for one while right of access wasn’t provided in case of the other. But since L&T had ring-fenced the projects from itself, the impact was only on the lenders and not on L&T itself.
We wrote about that here (Two L&T Road Projects Default, But There’s No Recourse To The Company. Is This The Beginning?). Unlike L&T though, in case of Invit’s, the company cannot just walk away since there other projects in the same basket! If a road project becomes unviable, the investors in the INVIT will lose money if the tolls received fall.
Another bigger risk is Political or Court Intervention to stop collection of toll. While some are compensated, some like Noida Toll Bridge near Delhi were told that since they had collected the amount well more than what was spent, the toll needs to be removed. You can find our article here (Courts Say No Toll and Noida Toll Bridge Gets Beaten Up).
In other words, future risks are always around the corner and there is no way one can assume long term projections. Like for example IRB has assumed in the chart below that traffic will keep growing at a steady pace till 2035. 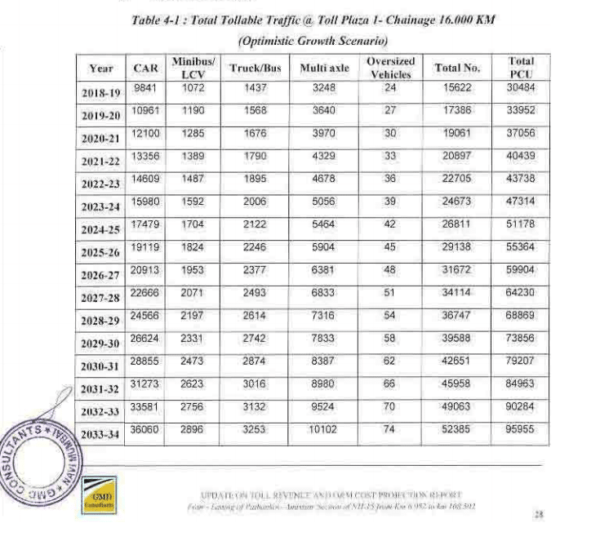 Based on traffic, Concession period can be shortened or lengthened though that is little comfort since if traffic flow is below estimates, it reduces the returns while extending the tenure. On the other hand, if traffic is higher, the term of the concession itself gets cut.

The last risk is of overvaluation. INVITs can buy further projects from the developer, based on another valuation report. This can easily be gold plated. If that happens, the INVIT will take debt (from a bank) and then buy the project from the developer. The Invit is managed by the developer. If you gave someone money to manage, and they used that money to buy something they owned, would you not have a small problem with incentives? It’s not easy, for most investors, to detect this.
IRB Invit has done worse than India Grid since unlike India Grid, the end value for IRB goes to zero. (You give the roads back to the government, whereas in IndiaGrid you will have some residual value in terms of grid infrastructure)
Note: REIT’s are slightly better. They collate property and then pass on the rental cash flows to investors, and thus have residual value in the price of the property, being owners of it. This is generally perpetual in nature and not just about getting a certain XIRR return.
Today, you might look at projections and say that we will get Rs. 10 per unit this year, Rs. 5 next year, Rs. 15 in year three and so on. The back-ended nature of this (most of the returns come later due to inflation adjusted higher tolls) means that you must trust the estimates much later in time, in order to get your return. So a 14% rate of return is trustworthy only if the later estimates are correct. But for that to happen, the government must not build alternate roads, courts must not intervene, the government should not suddenly make tolled roads free (they did this for a month in demonetization) and of course, the developer must be honest enough to declare the correct value of collections for the next twenty or thirty years. In India, with a relatively lax legal system, we might be asking for too much.

Strong Institutional interest has meant that REIT’s in developed countries have a substantial following. India with its huge requirement of Infrastructure can ensure better access of capital to developers if stringent rules are put in place to ensure that projects that are sold are alued by third parties not affiliated or paid by sponsoring companies.
The InvIT risks might need higher returns to be attractive. At Rs. 79 per unit, you might be able to use the company-provided estimates to get an IRR of 14%, but it’s quite likely you want the 18%+ numbers to make sure your returns, net of the risk, remain attractive. Let’s hope the next set of INVITs and REITs address this.

Premium: The New Game in Town: The First Listed InVIT by IRB. Our Take
IRB Invit Will Buy a New Project That Eats Into Cash Flows For 9 Years