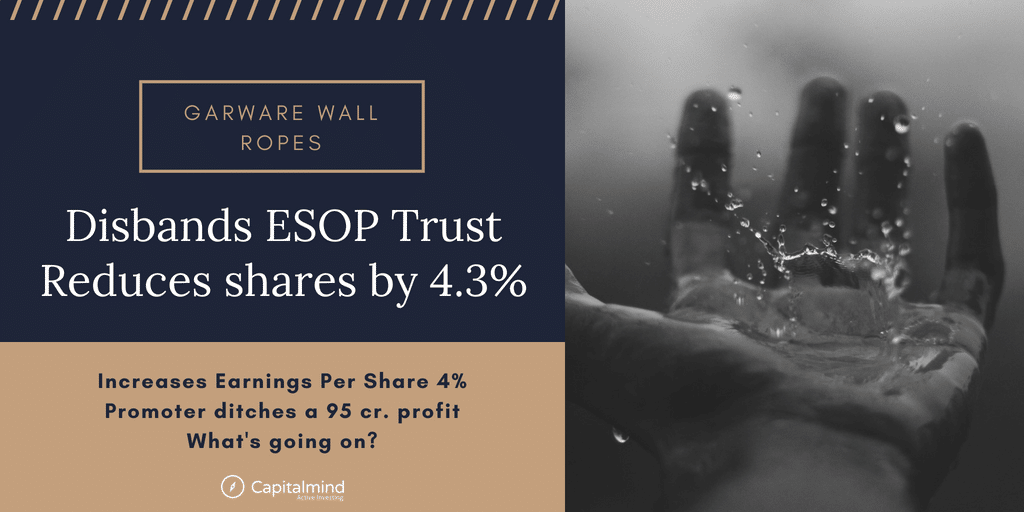 An interesting note came about yesterday. Garware Wall-Ropes, a company that makes fishing nets and ropes and sporting nets and things like that, had a disclosure that: It’s interesting because of this: Garware saw an EPS of Rs. 48.06 last year. Because of the above restructuring, the EPS will go up to Rs. 50.23, because the number of outstanding shares will fall. This is a 4.5% increase in Earnings Per Share.

But what’s really happened? Does it impact the company or the shareholders? Let’s see.

First – let me disclose this: I have a personal investment in the shares. We at Capitalmind Premium have recommended it.

In 2006, Garware Wall Ropes created a trust called the GWRL Managerial Staff Welfare Trust and the idea was to issue ESOPs from it.

In 2013, this trust sold a few shares (about 33,500 shares or so) because in the shareholding pattern the ownership dipped to 946,500 shares and has remained that amount since.

Who paid the money for these shares?

It seems like the company had itself loaned the trust this money. Since the allotment was at Rs. 66.5- per share, the trust should have paid Rs. 6.6 cr. for the shares. It would have borrowed that from the company. (This is legal and done even by large companies. L&T has done it, and so

But then the trust received about Rs. 29 rupees per share over the years as dividend, and thus returned about 2.75 cr. back to the company since.

The trust was supposed to be used for ESOPs. They didn’t do it. This is not illegal, even L&T has an employee trust owning 12.55% of the company and that’s been funded by L&T itself.

However, the promoters seem to be doing something interesting. They effectively manage the trust and therefore could have sold shares from it and realized pretty intense profits of nearly 95 crore rupees.

Instead, they chose to disband the trust and cancel all the shares. This means that the shares will be annulled and removed, and the total number of shares will fall from 2.18 cr. to 2.09 cr. shares.

The loan – presumably not interest bearing – to the trust will also fall from the current 3.91 cr. to zero. Effectively this is a loss to the company, but it will be adjusted against the securities premium reserve. They need NCLT permission for this – that’s why the above announcement was made in the first place.

Is this a bad thing?

I’m very cynical about this kind of stuff. It’s hard to imagine, for me, why someone would give up a Rs. 95 cr. profit. But this is actually the right way to go. In doing so, what this does is:

This could actually mean they are introducing an ESOP scheme in reality, and will allocate shares to employees from it. This would be a good thing because the management will then get more motivated, and there are non-promoter managers in the company that fully deserve a share.

Either ways, this doesn’t look bad. At best, it may have been triggered by a move to IND-AS accounting standards but we don’t know for sure. the amount is not consequential, so it looks like a way to set things proper.

They will soon change the company’s name to Garware Technical Fibres Limited. That might be a better name for it, honestly.

We won’t discuss other fundamentals here – but overall, this development seems to be good for the company. If you’re on Capitalmind Premium, head over to #stock-fundamentals for more discussion and notes on it! (Do consider subscribing too)

Disclosure: Author is invested in the stocks above, and therefore is biased. Capitalmind Premium has recommended this stock in a portfolio. There is no other relationship with us and the company mentioned.