Growing a company organically is a time consuming process and one despite the best of efforts may not end up exactly where the management assumed it will reach. Inorganic growth – by acquiring companies is kind of a steroid that can ramp up the top line number in no time, but at a much higher cost.
While acquiring companies come easy, the price is generally paid by shareholders if things go wrong, by either lacklustre growth for a long time or worse, a steep fall towards bankruptcy. Acquisitions are a double edged sword – because if you get it wrong, and the culture and company fit is absent, the acquisition is now a Sword of Damocles on the acquirer’s head.
From Tata Steel to Suzlon, we have dime a dozen companies which have in the past tried to ramp up their top line by aggressively acquiring companies. Yet, very few Mergers and Acquisitions make financial sense given that such deals rarely tend to happen in times of distress when valuations are cheap and risk affordable.
Walmart this week made an acquisition of the size it has never made. In fact, the acquisition price is just over the total amount Walmart has spent on Acquisitions over the last 10 years.
Wal-Mart is the predominant retailer in the world, with an estimated 35 million shoppers per day. While much is spoken about the dominance of Amazon when it comes to Retail Sales, when it comes to Retail Sales Worldwide, Walmart in 2017 sold 3.7 times of Amazon and nearly as much as the next 5 retailers added together. 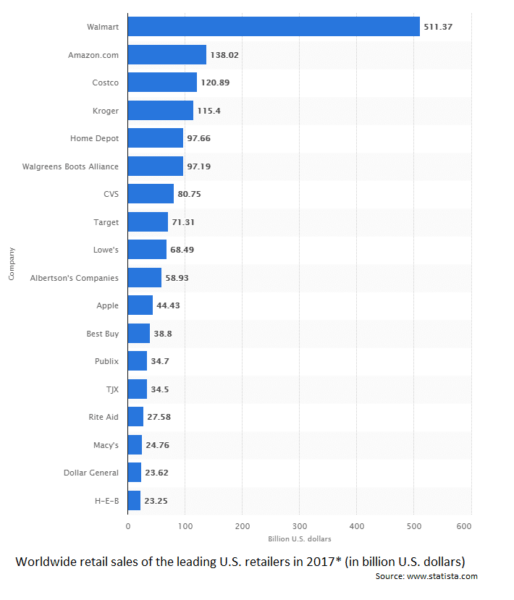 When it comes to Online sales, Walmart has a market share that is less than 10% that of Amazon. Worse, it’s not even in the second position which belongs to eBay. 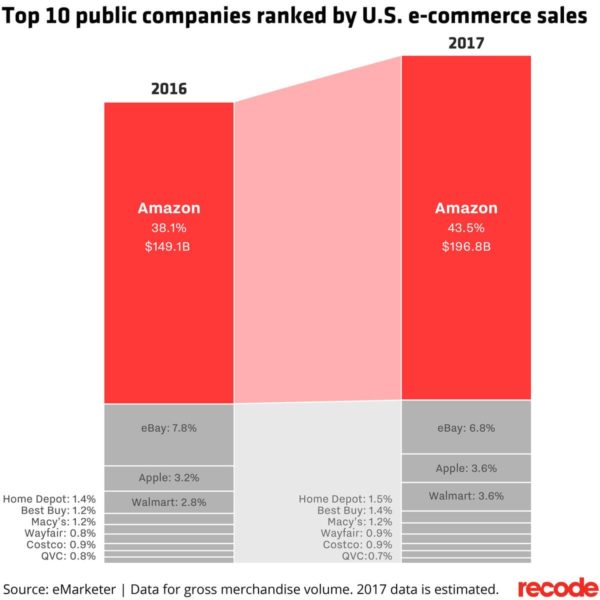 The world is moving towards online and while the percentage of offline sales still beats the hell out of online, it’s a matter of time before online matches and overtakes offline for the convenience it offers and the attraction is unparalleled.
Hans Rosling, who used to be a professor of global health at Sweden’s Karolinska Institute in one of his TED talks listed the Washing Machine as one of the greatest inventions for it freed the women folk from having to spend a lot of time and effort which then could be put to better use.
He explains the thought process in a lovely Ted Tak (Link:  The magic Washing Machine)
Shopping for many is a chore that they would rather go away. Many would rather be on the couch watching the Saturday evening Football match than stand in a Queue that seems to barely move at the checkout counter.
Online merchandising has changed all that. Where once we had to spare time and make efforts, now you can have items delivered to your home with the click of a button. And if you could do that while knowing that the price was unrivaled elsewhere, why would you even bother going to the store other than to just “Window Shop”.
Amazon and its Indian copy, Flipkart both started out with books and have over time expanded themselves to selling just about anything. In fact, a book on Amazon and Jeff Bezos is titled “The Everything Store”.
While the Unites States of America still accounts for the majority of online sales, over time China and India will match if not overtake it. This is just a matter of time since both countries are on the ascent when it comes to Income and as people grow richer, it changes more than just habits – it creates new ones.
Before the arrival of Jio for instance, I doubt if anyone felt that India would be the market leader in consumption of internet bandwidth, but here we are.
China unfortunately is a closed market for any firm that doesn’t have Chinese roots. The government directly and indirectly will ensure that they can never make it big. From Google to Twitter to Facebook, China has a replica company that do the same stuff, but protected by the overlords from competition.
That leaves India. While we have South America, Europe and Africa, the dynamics of both those continents are way different and Walmart has actually failed in their endeavour in countries such as Germany, South Korea, Russia and Brazil for different reasons even as Amazon has succeeded in having a market share in most of them.  Just a few days back, Walmart announced its exit from UK by selling its stake to Sainsbury for $10 Billion in stock and cash.

Flipkart India’s Being Bought Out

Walmart will now pay $16 billion – over Rs. 100,000 crores – for Flipkart. There’s no point analyzing whether Flipkart is making a profit – it is not – or what the tipping point is, where it will. This was a game of presence – for Walmart to come in, and participate in the India story in some way or the other. The offline retail model is simply inaccessible because of India’s retail rules. For Walmart, online is the only opportunity – and there’s not much difference in the ownership of Flipkart currently (mostly foreign owned already) and with Walmart as the owner.
According to the BBC, Flipkart does about $4.6 billion of net sales (net of refunds etc) – which would make the acquisition price more than 3x sales. What can Walmart change? For one, it can’t still directly sell products – because Flipkart is still officially a marketplace. However, it can own the space on which the sellers keep items as inventory to sell online. It owns the customer experience. It even owns the shipping companies that eventually deliver to the customer. The sellers just procure stuff – some of them from the same wholesale network that can be owned by a foreign company like Walmart – and then list their stuff. The online “marketplace” manages the inventory, the sales cycle, refunds, delivery and what not.
The amount they’re paying can be justified quite easily if you think about the arbitrage that the regulations give you in the name of a “marketplace”.
India isn’t new to Walmart which for nearly a decade has been trying to make a mark – first by having a joint venture with the Mittals of Bharti Airtel and later alone though thanks to India’s rules regarding private ownership of retail, has made little progress.
There has been a lot of print on trying to analyse the Walmart acquisition of Flipkart including disbelief that they are paying so much for what is essentially a loss making venture. I see no point repeating the same since they have in totality tried to cover all the bases. The good  part, however, is that lot of young people – the employees and founders at Flipkart – will make a very decent packet in the process.

What misses the point is that, without taking risks, Walmart can never succeed and while it may still have a upper hand in the United States, as other retailers saw, that edge can get washed away faster than anyone thought it could happen.
David Glass who was the CEO of Walmart from 1988 to 2000 had the following view on Samuel Waltson – He is less afraid of being wrong than anyone I have ever known. And once he sees he is wrong, he just askes it off and heads in another direction. While Samuel may be long gone, his philosophy and the vigor hopefully has stayed behind.
How the scenery will be a decade from now is tough to analyse, but if Walmart intends to survive this race with Amazon, the only way is to up the game and take the bull head on.
For the Indian Consumer, the acquisition means that along with Alibaba which is backing PayTM and Softbank which is now back to holding only Snapdeal, the showers of offers will continue for quite some time. After all. with everyone having loads of cash, expect a situation similar to a bare knuckle boxing fight as they try to dislodge each other. Game On.