In this “Funda” post, we shall try to understand the term: revaluation reserve, a term we often see in Balance Sheets.

But before that, we need to understand Reserves and surplus under which the revaluation reserve is a line item.

Reserve and surplus appear under shareholder’s funds on the Equity and Liabilities column of the balance sheet. (Equity is a liability – think of it as saying the company “owes” to its shareholders the par value of the shares they own, and the profits it has retained)

The Equity of any company is share capital + reserves.

Reserves are then stuff that’s like equity but extra.Let’s take the different kinds:

Some reserves can be used to pay dividends (General reserves, some capital reserves etc.) but some are not exactly allowed (like securities premium reserve, or indeed the revaluation reserve). That’s why some of the above are called “free” reserves, while others are “encumbered” reserves.

Give Us An Example

Below is the sample reserve and surplus section of two companies APL Apollo and Balkrishna Industries for FY17. 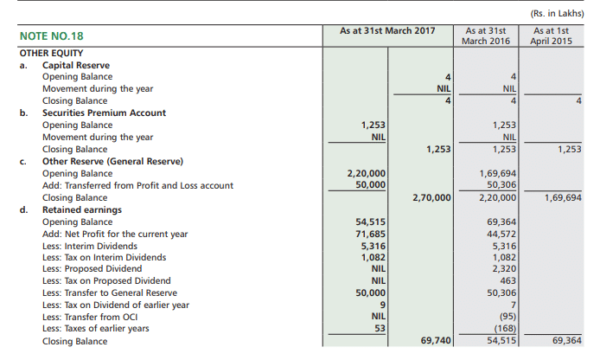 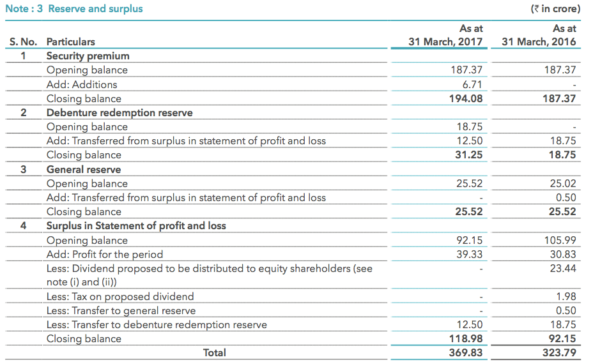 As can be observed from the above, there are different heads of reserves for both the companies.

In the balance sheet it might still reflect at Rs. 100,000 (at cost!) But the owner can simply sell the land to someone at Rs. 2 crore and immediately buy it back at Rs. 2 crore, thus increasing its profits and thus, adding to its shareholder capital (because it will then be a profit).

To remove the need to do this regularly, we have a revaluation reserve.

In the historical cost method the company carries the asset at the historical cost (purchase price) less accumulated depreciation and impairment loss if any. There is no scope for the asset to be shown at a higher price. For E.g if the company bought an equipment for Rs 1,00,000, the estimated life of the asset is 10 years and it will provide depreciation on a straight line basis, meaning Rs 10,000 every year for the next 10 years. The carrying amount of the asset on the balance sheet after year 3 would be 70,000 (1,00,000-30,000). There is no scope for upward adjustment under this method.

In the revaluation method, the fixed asset is initially shown at its purchase price, if the company carries a revaluation exercise and if it finds that the value of the asset has increased, it increases the carrying amount of this asset in the balance sheet.  This is called the revaluation surplus.

The company may also come across a situation where the market value is below the carrying amount of the asset, where in there is a revaluation deficit. (Typically no one does this voluntarily – so it’s enforced by some kind of regular revaluation check in an audit)

In case the asset has been written down resulting in a deficit, the deficit is first adjusted with the surplus and if the surplus has been exhausted, there is an impairment loss recorded in the profit and loss statement.

For example, some companies thought they had bought coal mining licenses worth X. The courts then said X is actually zero. Meaning the licenses were worthless. Therefore an asset which was worth X is now worth zero, so an impairment reserve will be created.

Take one company in different years.

Company has revalued its fixed assets and finds that the new value is Rs 2,00,000 instead of 1,50,000 on the books. There is a revaluation surplus of Rs 50,000 in this case. Hence the journal entry for recording the same transaction is:

The above company conducts a revaluation exercise after 3 years and finds out that the fair value of the same asset should be Rs 110,000 instead of Rs 1,40,000 (2,00,000 is adjusted down for depreciation). In this case the asset has to be written down and there is a reversal in the revaluation surplus account, the journal entry for the same is

The fair value of the assets is Rs 80,000 instead of Rs 1,40,000, which is the carrying value. The revaluation reserve has only 50,000, the balance of Rs 10,000 will have to be recorded as loss in the profit and loss statement. Journal entry for this transaction will be

The other situation when the revaluation reserve is exhausted is when the asset has been sold off.

Can the revaluation reserve be used to boost shareholders funds?

Retained earnings (profits after paying dividends) showcase the strength of the balance sheet and in turn of the company. Companies earning higher returns on capital and redeploying them at the same rates can expand their business, reduce debt and reward shareholders in the form of dividends. Hence it is advisable to look at the trend in retained earnings to know the strength of the company.

Revaluation reserves on the other hand are not frequent and do not arise due to the operations of the business. There is no actual profit or loss and cash flow that happens when an revaluation exercise is carried out by the company. Hence if there is a boost in  shareholders funds due to revaluation exercise, it is not sustainable and does not represent the quality of earnings of the company.

But revaluation can help some entities, like banks – where the strength of the equity is paramount. The more equity (share capital plus reserves) that you own, the higher you can lend!

In an interesting development, the RBI in March 2016 in a step to help banks, relaxed norms which will bolster banks capital. What are then the steps taken by the RBI?

What happened to banks balance sheets by carrying out the revaluation exercise? Let us find out below

Below is the consolidated balance sheet of SBI for FY17 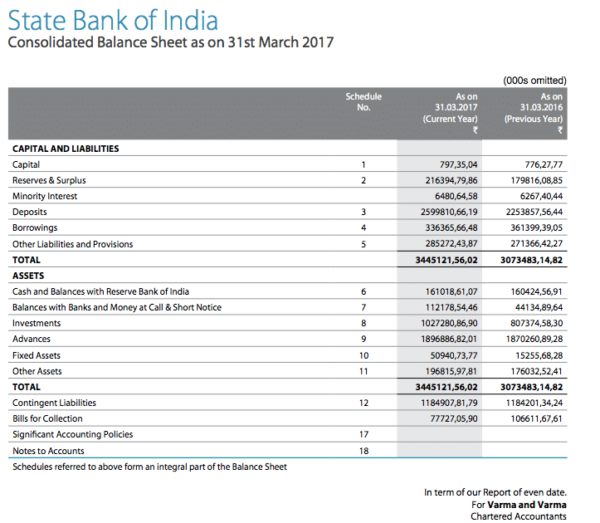 On close observation if you particularly look at the reserve and surplus, there is an increase of 20%. This is very impressive especially given its large base. In a ideal situation these should have been driven by the profits of the company, but have they in the case of SBI? Lets dig in, shall we.

Consolidated P&L of SBI for FY17 The bank has posted a loss before adjustments for share in profit of associates and minority interest. Hence it is clear that profits have not led to the increase in the shareholders funds. Let us look at what has lead to this increase 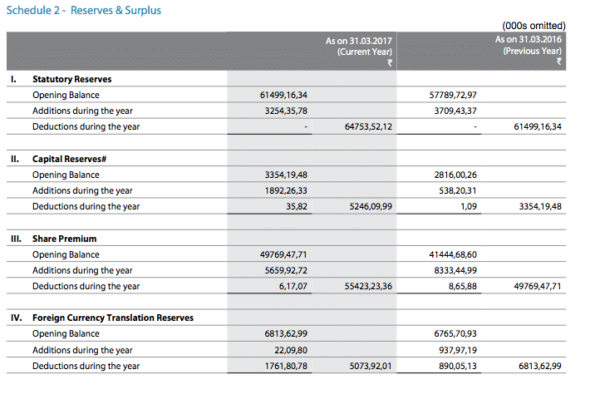 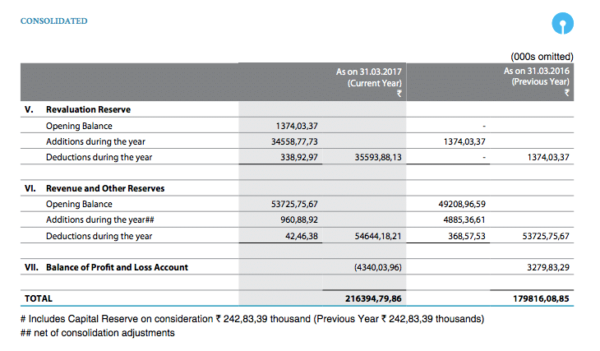 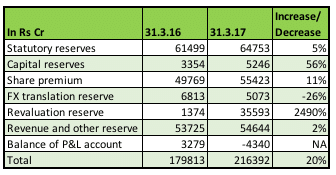 It is clearly evident that the revaluation reserve has primarily lead to the jump in the shareholders funds. Revaluation reserves have seen a massive jump of 2490%. The premises of the bank, we assume that these must the property owned by the bank – whose value stood at Rs 5,832 Cr in FY16 are valued at Rs 40,991 Cr at the end of FY17. 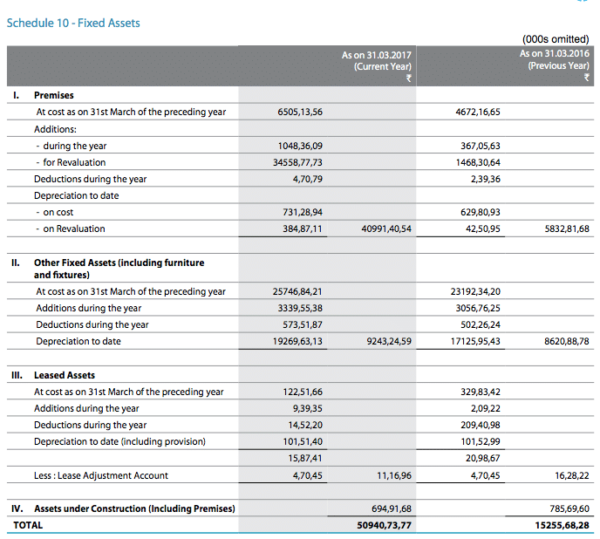 Public sector banks and entities do own large amounts of property – some for their branches, some for their premises offered to their executives for residence and others are simply property they have taken over when people refused to pay up their loans against which they had put property as collateral. They’ve seen some of those appreciate over many years. A regular revaluation can easily increase their reserves and thus their equity capital.

This is a one time exercise to tide over the crisis and with real estate prices not really in the grip of a bull run, another round of revaluation is unlikely to happen in the near future.

Revaluation Reserves: Worth it?

We should of course look regularly at revaluation reserves and how they have come by. In some cases, revaluation is a sham – you can get an auditor to certify whatever you want if you want to show an increase in the value. In others, they are conducted well and truly reflect the assets held by shareholders.

Sometimes companies own shares of other companies. Those shares are valued at cost. Companies don’t regularly revalue those shares even though, if they wanted, they could sell those shares in the market and realize the gains! Such companies tend to get a “discount” because they won’t easily sell those shares (like promoter entities) but sometimes it will reduce the fear of investing in a company if it has enough assets to support its valuation.

But, in general, a company that needs to revalue its assets to get a firmer footing isn’t in the best of health. Knowledge of this fact alone can avoid us getting trapped into companies that look like value but generally turn out to be value traps.

NOTE: Please do not consider this article as a recommendation, It is purely for informative purpose only. Authors may have positions in the stocks mentioned, so consider our analysis biased. There is no commercial relationship between Capitalmind and the companies mentioned in this analysis.