In the first big public stock bankruptcy resolution, Electrosteel Steels has been declared bankrupt and has now been sold. Vedanta will now become the new promoter. Two things will happen:

But what happens to existing shareholders?

Now we described earlier that we aren’t very positive for existing shareholders. (Read: The Bankrupt NCLT Companies may survive, but you still lose: Monnet Ispat Edition)

The resolution plan for Electrosteel Steels has demonstrated how bad it really could get.

The full plan isn’t known yet, so we’ll have to still make some educated guesses. But here’s the statement from Vedanta. 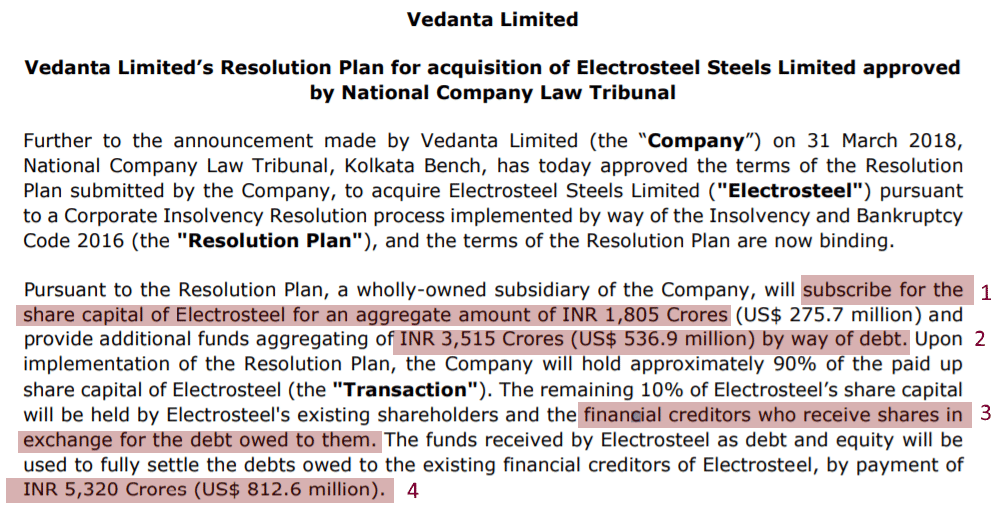 Let’s take this part by part:

3) Lenders who currently are owed money, a sum of Rs. 13,000 cr. will take a “haircut” – meaning they agree to take much lesser back (point 4 below). The hair cut amount will be converted to equity shares.

Here’s the order confirming the resolution.

So, How Does It Impact Shareholders?

We decided it’s boring to write. So we made a video: 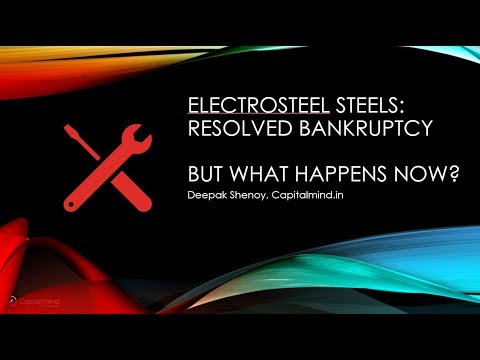 Essentially, Electrosteel Steels is getting a valuation of around Rs. 0.08 (8 paise) per share today, after lenders are issued shares for their hair cut, and then Vedanta is issued new shares. Even after it gets into fantastic production metrics, it’s probably worth less than Rs. 0.25 per share.

Forget all this, Should We Buy?

If you forget all this, you can forget buying also.

It’s really not worth the effort if the valuation metric even in the most bullish case (see video) is just Rs. 0.25. Even if you give zero shares to lenders, the valuation after the company has recovered and started to make profit, is just Rs. 2.5 per share. There’s simply no visible value here.

Investing is easy, once you get through the hard parts.

Of the 13,000 cr. the banks would have provisioned 6500 cr. already, due to RBI rules stating that if an account goes to bankruptcy, banks have to take a 50% provision. But now, they’ll have an additional Rs. 1300+ cr. as a further hit to be taken. In the coming quarter.

Plus, Vedanta has iron ore mines nearby and can add value in terms of ensuring supply. But this is so tiny in terms of Vedanta’s total business that it makes little sense to use it as a reason to buy Vedanta shares. It will take a few more such deals for the impact to be of significance. But hey, at least someone’s winning.

Disclosure: No positions. We have no recommendations or ownership of Electrosteel steels, and we have no connection to any of the companies mentioned. This is purely for educational purposes; please do not make any transactions on the basis of this article. Do your own research.