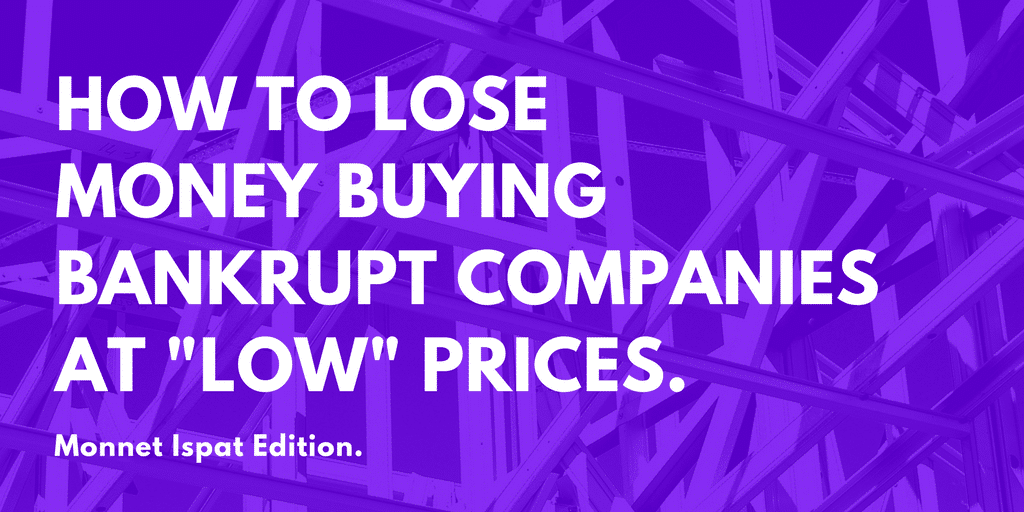 There’s a steel company called Monnet Ispat which has a 1.5 million ton steel capacity. It owes banks Rs. 10,200 crore rupees. That’s nearly as much as the PNB Scam, and a very large sum of money. If you put that much money in a bank, you’d earn about 700 cr. a year, or about 1.9 crores per day, or approximately Rs. 65,000 by the time you finished reading this Capitalmind article. (It’s long, so you might earn even more)

And that’s just the interest.

Which is exactly why Monnet Ispat went down. It couldn’t pay the interest.

In 2014, Monnet got into trouble when its coal mine licenses were cancelled after a supreme court ruling removed all mine allocations since 1993. The loans it had were a consolidated 10,000 cr. at that time, and they couldn’t earn enough to pay the interest.

So the company’s lenders tried to do exactly what a new RBI scheme, SDR, allowed it to do. In 2015, lenders took about 51% of the company for a mere 370 cr. (converting part of the debt) Now the banks owned the majority of this steel company.

After this, they said: “What are we doing owning a steel plant?  Let’s try to sell”. And then many rounds of bids later, only JSW Steel emerged with an offer, and even then the banks didn’t want it.

They went the NCLT then, taking the company into bankruptcy resolution.

And that process is now nearing it’s end. Meanwhile the share continues to trade, at values of Rs. 27 per share or so, jumping up and down as the resolution process continues.

The answer, to make life very boring is: NO.

But before that, a little background.

The Concept of Bankruptcy Resolution

When a company isn’t able to pay debt, that is like your owning a house and not being able to pay back the EMI. What happens?

The bank will take over your house. Then it will sell it. Someone may come and offer them only half the amount outstanding on your loan. They might take the offer. Then, you don’t get any of your down payment or any earlier money back. You simply get nothing.

You are effectively an equity shareholder in your house. When you default, you lose all the equity that you have put in so far – and the bank takes a hit on the house loss when they sell at a lower amount. (In general, banks can still come after you for the remaining amount, but lets leave that out for now)

In a corporate bankruptcy, the concept is similar. The company can’t pay its debt. So it’s effectively taken over by the lenders, who then try to sell it to someone else. If that someone else pays a lot less for the company than the outstanding debt, current equity holders will get nothing (or very little).

Bankruptcy in India, under the new Indian Bankruptcy code, is a process handled by the National Company Law Tribunal (NCLT). The NCLT does this:

So, in general, you have no idea how this will pan out. Existing shareholders can go to zero in a liquidation. They can see a share price fall to Rs. 1 after resolution. No one knows how it will work, and meanwhile the share continues to trade!

Monnet Ispat’s Resolution Plan: Dilute Everyone and Their Uncle

Monnet has a resolution plan that has been offered by JSW-Aion. This is:

In return, all operational creditors (people who are operationally owed money, like vendors or such) get nothing. The banks get their 2650 cr. and go away. And then for equity shareholders, the structure changes.

And then the company is going to be run by the JSW/Aion combine. Great?

Well, not so much if you’re a current shareholder. Remember, the stock trades at Rs. 27 or so. Let’s look further.

JSW/Aion is putting in Rs. 398 cr. of equity for 75%. This is the maximum that can be owned in a public company, which is why they’re only doing equity for 398 cr. and the rest in compulsorily and optionally convertible preference shares.

Promoters and others will not get any new shares. They get diluted. Promoters go from 25% down to just 3%.

We can then derive how the structure works.

As you can see, the dilution is massive! But that’s not the end of it.

Remember the stock is currently at Rs. 27 in the market, but JSW will buy in at Rs. 3.13 per share. (The market doesn’t have that much of an idea of how to value this company as it resolves)

Let’s just say that the convertible preference shares are also issued at the same price. So another 277 + 200 cr. is converted to shares at Rs. 3.13 per share. (This is how I would offer a deal – put the prices down right now)

This means a further 152.2 cr. shares will be issued to JSW/Aion on conversion! That’s going to result in this structure:

Look at this carefully. We currently have 20 cr. shares. We will eventually see 322 cr. shares. That means the company will issue 150x more shares eventually, diluting existing shareholders in a big way, more than 93%.

Current shareholders will own 1.7% of a fully diluted Monnet Ispat.

Current shareholders (non promoters/lenders) own about 28% of the current Monnet – which is at a market cap of Rs. 540 cr. Put another way, current public shareholders own about Rs. 150 cr. of Monnet Ispat.

To make any money, Monnet Ispat has to be worth so much that 1.7% of the new entity should be worth more than that 150 cr. (due to dilution).

And that is just to break EVEN on the current price. This is incredibly difficult – let us explain.

What can Monnet Ispat’s value be?

Let’s assume fantastic things happen. Monnet Ispat is revived, and it still stays public. (That’s the point, really – because otherwise they would have wiped out everyone else and taken the company private, and owned all of it. Remaining public allows the promoters to sell their shares at a later point at a better valuation and also Aion, a hedge fund, to find sellers for its shares)

Monnet has a 1.5 million ton plant. JSW has about 18 million tons of capacity. So lets see what JSW is valued at and then do an appropriate adjustment.

Steel companies are valued as enterprise value (Debt plus Equity) compared to the EBIDTA they generate. 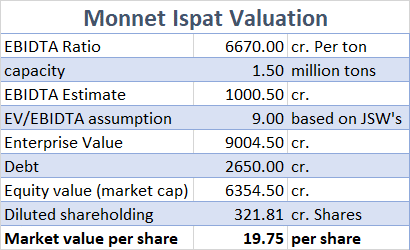 And that’s probably after a couple years as JSW gets the efficiency going. (Remember, they have to get coal at a relatively low price, without which they can’t get JSW-level metrics).

Put another way: If you valued Monnet Ispat after all the dilution, in the best case situation, the market value per share will be Rs. 19.75 per share.

That’s the power of extreme dilution.

And that’s also why getting into these NCLT bankruptcy cases is a tough case at best. Even the Monnet case has risks; if they have to buy coal at higher prices, their EBIDTA will fall substantially and they’ll end up with a much lower market value.

Investing requires a margin of safety – and here in these bankrupt cases, all you have is:  at best, you will lose only 30% from the current price.

End Note: The power of destruction

But that’s how capitalism is supposed to be. Some people will profit because they have the ability to buy assets this cheap, in a fire sale. This is the creative power of destruction, for the incoming new shareholder.

Current shareholders, of course, see the power of capitalism in another way: Equity holders get beaten up in a fire sale – and this was a demonstration. This should serve as a warning to current shareholders of Monnet Ispat but also to those of Bhushan Steel, Amtek Auto and the like – there is unlikely to be anything on the table for them.