Update: After this post, SBI posted record losses of 7,700 cr. in the subsequent quarter, and we have a small note at the bottom. Even we couldn’t have predicted the intensity of that loss, to be fair.

“The worst is over,” chairman O P Bhatt told reporters on the sidelines of an RBI event here when asked about the bank’s non-performing assets (NPA) levels.

In the January-March quarter of 2009-10, SBI reported a 32 per cent fall in its net profit at Rs 1,867 crore, partly pulled down by higher provisioning for NPAs. Its net profit in the same quarter in the previous fiscal was Rs 2,742 crore.

“We think the worst is over with regard to NPAs. NPAs have plateaued. The biggest hit was from one aviation company, which accounted for about Rs 1,200 crore of the NPAs. But we could expect some improvement in the sector following the proposal to allow FDI and direct import of fuel,” Mr Chaudhuri said.

“We think the worst is over with regard to NPAs. NPAs have plateaued. The biggest hit was from one aviation company, which accounted for about Rs 1,200 crore of the NPAs. But we could expect some improvement in the sector following the proposal to allow FDI and direct import of fuel,” Mr Chaudhuri said. 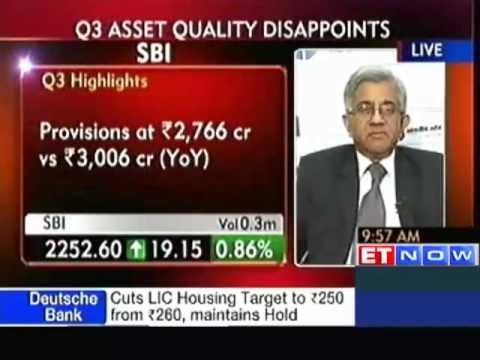 “I think we are behind the worst, definitely” – while he meant that the worst was behind them, his mis-statement actually proved prophetic.

“Have I seen the worst already? I hope so,” Bhattacharya said. “But let’s just wait it out for a quarter or two.”

“The worst is behind us when it comes to stressed assets. But let me warn you that the recovery will be slow and staggered as all those accounts marked in the watch list display stress. But I don’t think we will be revising upwards the watch list of Rs 31,000 crore going forward,” Chairperson Arundhati Bhattacharya told reporters here.
(HT Andy Mukherjee on Twitter)

“Worst is over. A few chunky accounts remain which may or may not slip,” Bhattacharya told Firstpost on Wednesday. “If no resolution happens,then provisioning burden will remain,” Bhattacharya said.

But, the bank’s management claimed that the worst was over.

“The NPA recognition has peaked, slippage ratio is coming down, credit cost continues to be elevated, because many of the resolution will happen in June quarter I don’t want to sound very optimistic on Q4FY18, I am not pessimistic about it either. But FY19 onwards we have certain estimates to achieve a certain level of RoA and RoE. Today I am sitting in February in 45 days no miracle is going to happen but we can hope for a much better performance next fiscal,” said Rajnish Kumar, Chairman, SBI.

This is after the worst results SBI has seen in 19 years, for the Dec 2017 quarter.

So Is the Worst Over?

Stuff that’s still ahead: Big NCLT resolutions (which will mean even larger haircuts than the banks have allocated for), more NPAs in sectors they haven’t yet anticipated (retail lending) and general pain because of rising bond yields.

SBI has 200,000 cr. of bad loans. That is definitely “Gross” NPA. That is more bad loans than most banks have given in loans in total, and it’s 10% of SBI’s lending in total.

If you keep saying the worst is behind you and things get even more worse, then you’re walking through time facing backwards.

It’s only gonna be over when they stop saying it’s over.

Update: We posted this in Feb 2018. Subsequently, in May 2018, SBI announced the next quarter’s results.
They showed a loss of Rs. 7,700 cr. beating all past records of losses. This is after, as you may recall, the worst was over. (link)
And yet again:
“The industry has gone through a challenging phase and State Bank of India is no exception. But, I can confidently say that while last year was the year of disappointment, this will be the year of hope and next year will be the year of happiness,” Chairman Rajnish Kumar told reporters at a conference in Mumbai.
Gross bad loans crossed 200,000 cr. and net NPAs were at 110,000 cr. They blamed the results on everything possible, but we think it was the lack of sunlight. There are still dark corners in there, and you might want to get the popcorn every time SBI announces results.
Yes indeed, folks, the worst, is over. Because they say so, and how dare you not believe them.

Update: 25 July 2018
Rajnish Kumar, SBI Chairman: “People don’t believe when you say that the worst is over. We have to prove now that the worst is over. So wait for next two-three quarters,”  (Link)
Thanks @contrarianarora for the heads up.
This is good. Because they want us to wait until they can show us the reality. Finally, a dose of reality?

Update: 11 August 2018: Give us one more quarter
SBI announced a 4,800 cr. loss in the Jun 2018 quarter. Where they said we’ll get somewhere but not in the September quarter, in December. (Link)

Responding to a question on when the bank would be able to report a net profit, he said: “If you ask me 100 per cent, then take it from December onwards.”
Kumar said the outcome of a case at the bankruptcy appellate tribunal will determine whether the current quarter will yield a profit, but was confident of posting a profit for the three months to March 2019 and the full year ending March.

Hopefully, soon, I won’t have to update this post….

Just a headline, but still: (Link)

The worst is over as far as non-performing assets (NPAs) are concerned, a top official of the country’s largest lender said on Thursday. He added overreach by investigative agencies must be avoided.