On twitter, I heard about the awesome poet, Rilke. A quote from him:

“The purpose of life is to be defeated by greater and greater things​​​​​​​”.

In a spectacular blowout, a US Exchange Traded Note called XIV has gone down in flames. The product was an inverse ETN – it was designed to provide an inverse exposure to the US VIX futures. Meaning, if the futures went up 1% it would go down 1%.

The VIX is a volatility index. This is calculated in ways that you can’t really participate in it, because it used the weighted average implied volatility on out-of-the-money options. That sounds like Greek, we know. And if you get deep inside this there’s enough Greek in there, like Vega and Theta and what not. But that isn’t relevant. What’s relevant is that you remember when markets go up and down? Volatility – and therefore, the VIX – tells you how much market participants think the markets will jiggle. A high VIX means lots of big moves expected, and a low VIX means the opposite.

Since everyone can’t play the futures market, products like XIV were born. A note that says we’ll provide you the inverse of the VIX – so if the VIX falls, the XIV will go up.

Thanks to Subramaniam for pointing this out on Slack! (Original thread)

The VIX isn’t like a stock – it’s the implied volatility in the market. So if it goes up, it will come down too. The eventual mean reversion means that the fees charged will take the product to ZERO, in 2030 when the product matures.

The ETN was backed by nothing. There was no “underlying short future” of any sort. It was based on a promise by Credit Suisse that they would make good the change. And you just bet on that.

The Good Times: When Life Was Benign

At Capitalmind we noted the lack of volatility in India. Things were even worse in the US, where there was nearly no jiggles in 2017; and the inverse VIX – which is effectively making money when volatility is falling – went to $145. 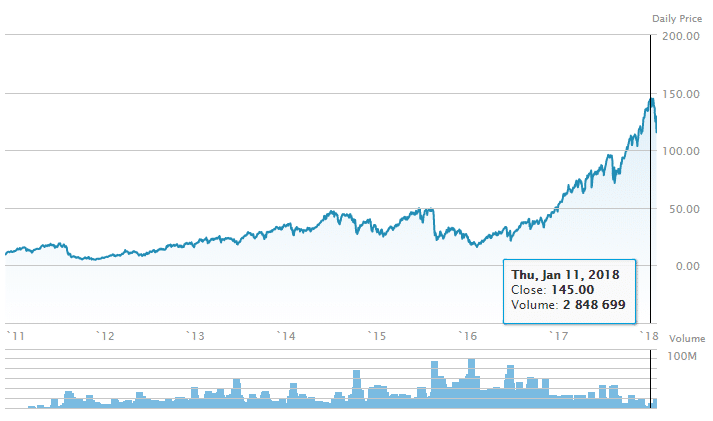 This sounded great – but no one was expected to own this product for long. It was literally a daily move being adjusted, and you would buy it, for instance, to offset the change in volatility ON THIS DAY. So if you owned index options, you would lose money if volatility fell, so you would buy this ETN to help you reduce that risk. And you couldn’t own options for too long – because then time decay will reduce your value anyhow.

In fact the fact that this goes to zero was even mentioned in the prospectus!

But that’s mechanics and it’s complicated and it’s supposed to be so complicated that retail investors should never be allowed in. But they were, and some were perhaps nuts enough to try and trade it.

The End: When Volatility Struck

I know we like to think in India that the Capital Gains Tax was responsible for the Indian market fall, but the real conspiracy is that the whole world’s markets came down because of it. (I’m just kidding! The real reason for the market fall is the discovery that Donald Trump wears a wig. )

Anyways on Feb 5, there was some mad levels of volatility. The US Dow Jones Index fell 1,000 points for a brief time and the VIX shot up big time – by the end of the day, it had risen 83%!

Investors in this product saw their value go from $116 to $6 or so, and they’ve lost money. Credit Suisse itself had some $500 million in the product, but apparently it has enough hedges so the losses won’t be material. The ETN itself had about $2 billion which is like pocket change nowadays.

This isn’t really an example of leverage. While it’s a short ETN, the product couldn’t lose more than 100% anytime. Leverage gives you the ability to lose more than 100% – so while it was a stupid product to buy as an investment – its not exactly leveraged.

Another lesson: products like this may be toxic, but they can still be okay if, as a position, they don’t hurt you too much. A 2% allocation to a prodcut that loses all its money is only a portfolio loss of 2%. We can’t say this enough: position sizing means more to your returns than most other factors.

Finally, it’s important to understand a product before buying it. Would you hold a product whose terminal value was zero? Are you still buying NCLT companies? Even if not extremely leveraged a number of shares are likely to go, very quickly, to zero. It’s the buyer’s job to differentiate.

At Capitalmind Premium, we’ve been doing extremely dangerous and toxically leveraged options trades too – but we are aware of the risk of extreme volatility and we would only commit knowing how much we could lose. We’ve had mad times, but net of everything we have still lived through and been quiet profitable too. They are all susceptible to black-swan events too – but as much as we’re living on the edge, the losses on an extreme move are still going to be digestible.

There’s a school of thought that says you shouldn’t do anything risky, but like Dory said to Marlin in Finding Nemo, when Marlin said he didn’t want to let anything happen to his son Nemo: