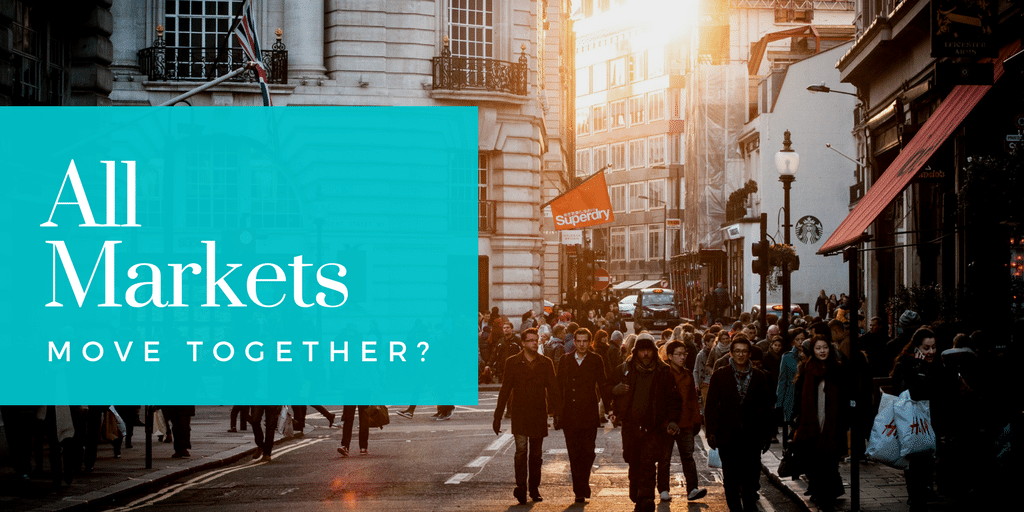 This is a guest post by Anoop Vijaykumar. Anoop is a SEBI Registered Investment Adviser and writes about equity investing at thecalminvestor.com. Follow him on twitter @CalmInvestor
It was going so well. Carrying on from a blockbuster 2017, the NIFTY had risen almost 6% in 2018 by Jan 29th. And then the jitters started. By the end of the 1st week of Feb, we were down almost 2% for the year, after a budget that added Long Term Capital Gains taxes for Indian stocks after 13 years. As of this writing, the NIFTY is roughly back to where it started the year, with expectations that more volatility will follow.
One way to look at the correction is that Indian markets had run far ahead of earnings and so they were inevitable. Another more popular explanation seems to be all things global, be it the new tax, cues, weakness, or sell-off. 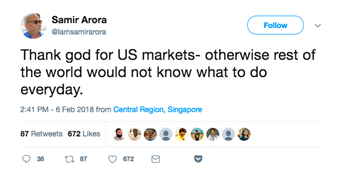 Samir’s off-the-cuff tweet seems to have some truth to it. Markets around the world do seem to take their cues from each other. This post, while not meant to be exhaustive, delves a little into the extent that they do.

Markets do broadly move together 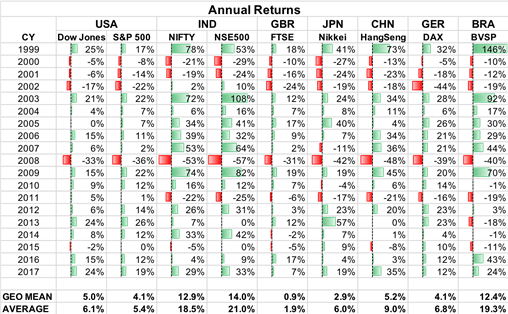 Largely, the up and down years coincide across borders.
A corollary from looking at absolute returns is how India and Brazil appear to have outperformed the developed markets by a distance. Which is why we need to take inflation into account.
Table shows annual returns adjusted for average CPI (Consumer Price Inflation). 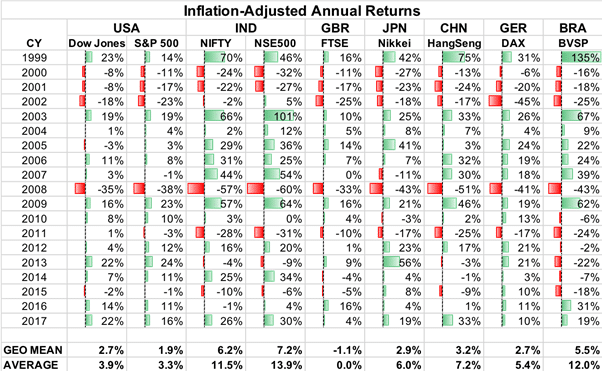 India and Brazil still outperform, but not by the margin we thought. Note these returns are in local currency and adjusting them to USD or EUR will likely further reduce the gap.
The German DAX had just five down years between 1999 and 2017, while Brazil’s BOVESPA has had 10 years of negative real returns, 7 of which have been in the last ten years. The other markets have had between six and seven years of negative returns.

Some move together more than others

Reading the table: Each value shows the correlation between the index name in the row and the column. For example, 66% shown in the FTSE column (3rd from top) is the correlation between the FTSE and the NIFTY (corresponding row).
Predictably, indices from the same country (DJI, S&P500 and NIFTY, NSE500) have strong correlations. In addition, US Indices move in lock-step with most of the world, note 95% correlation with the DAX and 89% with Indian indices.
The Nikkei and Bovespa show the least likelihood of moving together with other markets, as  shown by the relatively lower values.

Tables show pairwise correlations before and after 2008. Overall, correlations strengthened since the financial crisis between almost all indices. Note the relationship between the NIFTY and NSE500 with the FTSE and Nikkei before and after 2008.
For the BOVESPA, there has been significant weakening (uncoupling) from global markets as the Brazilian economy has struggled post the crisis. 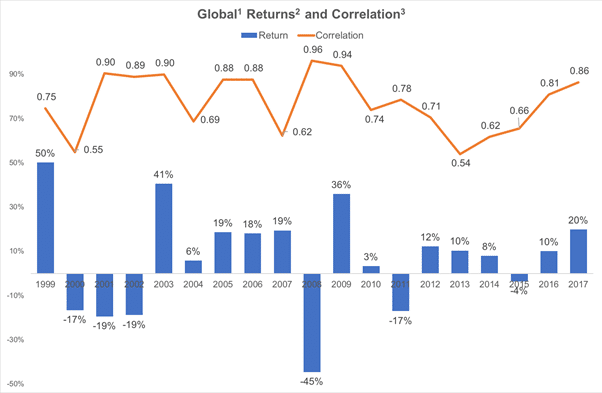 1 Average returns from DJI, S&P500, NIFTY, NSE500, FTSE, DAX, NIKKEI, HANGSENG, BOVESPA only considered\
2 Average of all inflation-adjusted index returns
3 Median of correlation of each index with every other index

A diversified basket of securities is meant to lower volatility while retaining returns but given the extent that global markets move together, even a “global” portfolio would see fair number of down years (from 2000 to 2002, 2008, 2011 and 2015).
Notice how correlation spiked to near-perfect 0.96 in 2008 during the financial crisis and in 2009 as they all bounced back together, then declined as individual country factors played a driving role.
Since 2013, correlation has been again increasing steadily as markets all over the world have moved together in response to the flood of liquidity. Therefore we shouldn’t be surprised to see India correcting alongside the other markets.
Whether strong earnings growth can help Indian stocks weather the storm better than others remains to be seen.
This is a guest post by Anoop Vijaykumar. Anoop is a SEBI Registered Investment Adviser and writes about equity investing at thecalminvestor.com. Follow him on twitter @CalmInvestor