The government has taken various measures in the past year to overhaul the sector – capping the prices of several medical devices and screening of non-communicable diseases and so on.

We will discuss the important announcements that the finance minister has made for the healthcare sector in the 2018 budget.

“Only Swasth Bharat can be a Samriddha Bharat”

Meaning only a healthy India can be a prosperous India. He also went to say that if India has to take advantage of its demographic dividend it cannot do so without its citizens being healthy.

The highlight of this year’s budget for the sector has to be the announcement of the world’s largest healthcare programme. So, what exactly is this?

The government has set two major initiatives under the Ayush Bharat Programme, the programme will address primary, secondary and tertiary health care system covering both prevention and health promotion.

The government under this scheme will set up 1.5 lakh health and wellness centres. These centres aim to achieve:

The government has set aside INR 1200 Crs for this project. The finance minister also invited contribution of the private sector through their CSR activities to adopt these centres.

At some point this has to be augmented by either private sector participation or a massive outlay from the budget.

Prior to this announcement the government ran the Rashtriya Swasthya Bima Yojana (RSBY), which provided INR 30000 to poor families. With the NHPS scheme the government aims to provide 10 Cr poor families (50 Cr beneficiaries) health coverage of 5 lakhs per family per year for secondary and tertiary care hospitalization. This is the world’s largest government funded healthcare programme.

The problem? Lack of enough funding.

The government intends to address the issues of productivity, wage loss and impoverishment with the introduction of these schemes. It will also help the government generate jobs and move towards its goal of universal health coverage.

The other announcements for the sector are

Expenditure on the Healthcare spending 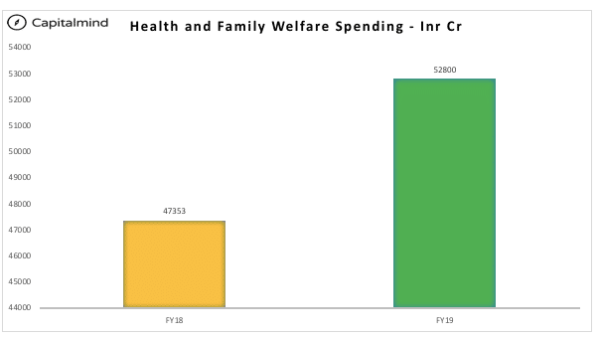 This increase, of Rs. 5,000 cr. is about the same in terms of % of total government spend.

Funding for this will come from various sources, some of them are

It’s all about the implementation!

The ideas are great, but most of the issue is in the implementation. What it will end up costing us is probably a lot more than expected. For a country of our size, we should be spending more than 150,000 cr. on healthcare, and improve our own resources.

We should also promote startups to help with last mile delivery of diagnostic services, and augment third party hospital trusts with funds, since many of them already deliver services to the poor (eye camps, vaccinations, check-ups).

The 5 lakh rupee insurance cover is awesome if done well, but at the same time should not be a route for over-hospitalization. Let’s see how it measures up, because it’s all about how it’s implemented.