You couldn’t get a better year for the small and midcap indexes with the smallcaps up 57% and midcaps doing a respectable 47%. 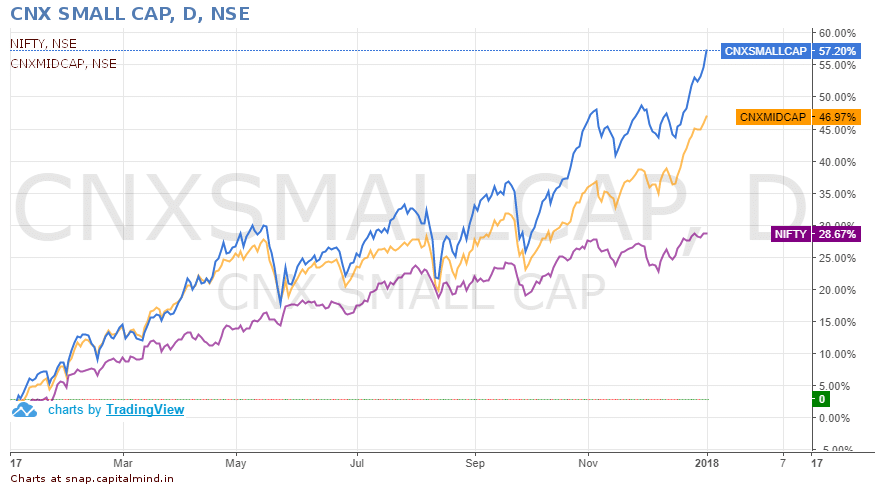 What’s for the next year?

For one, I don’t think making money will be as easy in 2018. This has been a brilliant year for everything, even random portfolios. It’s been a year of excesses, in terms of returns, as capital ran towards equities in a strong way. It’s seen returns come more from more buying, than from earning increases that would have raised valuations. The P/Es of all indexes are at near term, or all-time highs, meaning that we are paying more for stocks than ever before. This situation doesn’t tend to last, and while it may still go up a lot more before it reverses, it won’t end very well.
Does that mean we exit stocks? No. We keep a healthy debt and equity allocation, and continue to ride through. And then, as some under-covered stocks are found, they will be useful additions to portfolios.
What’s bothering is the government’s borrowing situation. Yields are up to 7.34% from about 6.4% in the early part of October. And this, after a rate cut from the RBI. There’s a distinct feeling that the government will have to borrow hard to finance the bank bailouts, and indeed, other expenses. Borrowing in the last quarter has gone up marginally, but the budget may spring more surprises.
And yes, there’s the budget. Which will come in Feb. Which will be the last budget of this government, before the 2019 elections. This was supposed to be a strong budget that cut taxes. Because that was what was promised. And more expenses, like infra spending and others. But in the light of higher yields, can the government afford to earn less revenue and spend more? And without this, would this even be the kind of blockbuster budget people are looking for?
(Caveat: No matter how zany the economic policy of the government, they still seem to get votes. So they might actually do well even if they didn’t do a big budget)
Finally, there’s the fact that worldwide liquidity is slowing down. Yields in the west and in Japan are higher than in 2008. And if they continue that way, equity earnings will need to perform much better than they are doing right now. But India’s liquidity is driven from the domestic retail investors buying, not really FIIs anymore. So will the change impact us?
The year’s going to be very interesting. I think we will see markets go both directions strongly. Both up and down, and probably first up and then down. This is, in general, healthy. But if there’s a factor we haven’t really anticipated, like a massive geopolitical event or such, the markets will show us what they really are – beasts of volatility. Let’s hope that 2018 will helps us learn to work with a market untamed.
Have a good one folks!