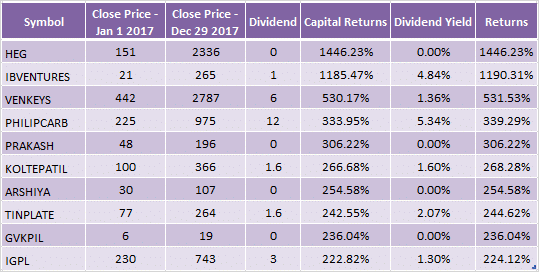 2017 has come to screeching halt. From recovery of demonetization to rising Oil prices and  implementation of GST to Gujarat Elections. We saw the market move everywhere, though the direction was firmly up. There were lot of jittery moments, but it ended on a good note. We bring to you the top performers of 2017 across different segments.
Note: All the stocks considered are part of NSE. The prices recorded are closing prices and are adjusted only to bonus and splits. We have not considered IPOs in this section

It seemed, much like the revival of the old guard. Metals, Oil and Gas and so on. Tata Steel had an impressive 82% return, but it’s still lower than the highs it saw in 2006-07. Reliance at 70% has its best year in a long time.

Large Cap performers include stocks which had market cap above Rs 20,000 Cr as on Jan 1, 2017. While their are 110 companies which qualifies under this category. 13 stocks declined the rest advanced.

Here again, some of the old guard comes into play. DLF from Real Estate. United Spirits (MCDOWELL-N) and the metal plays of Tata Steel and Sail. The new entrants with Bajaj FinServ, PEL and even Sun TV (thanks to the 2G judgement too) have done excellently.

The Future Group did very well in the year, and the retail arm did a 4x move. Adani transmission too turned around, and the momentum in financial players like IIFL, Edelweiss and Motilal continue. Tata Global, on the back of major debt reduction after Tata Sons bought over it’s stake in Tata Chem, has done excellently indeed. Graphite started a small cap but now is much bigger – with a 9x return. RAIN and HSCL too are part of the Carbon pack. Lots of good solid stocks in there, and some of them might continue in 2018!

HEG is in the same industry as Graphite. (Read our post). A number of the above stocks have now consolidated after rising through

Lots of interesting stock movers in the last year show us how markets can change the fortunes of many. From the steel players to real estate, we have seen sectors revive. We’ve seen new players, in the power transmission space, in Carbon, in metals and even in mining, take a very good position. 2018 will more  throw up more opportunties and more stocks our way.
But, as a quick note, be careful. This sounds like an endless money making machine. The word “endless” is the worst thing to assume. It always ends badly for some stocks, but it doesn’t have to end as badly for you. Your money shouldn’t be married to a stock, or a business. Momentum has worked wonders in the last year, but it won’t work the same way each year, and definitely not in the exact same stocks. Happy Investing!