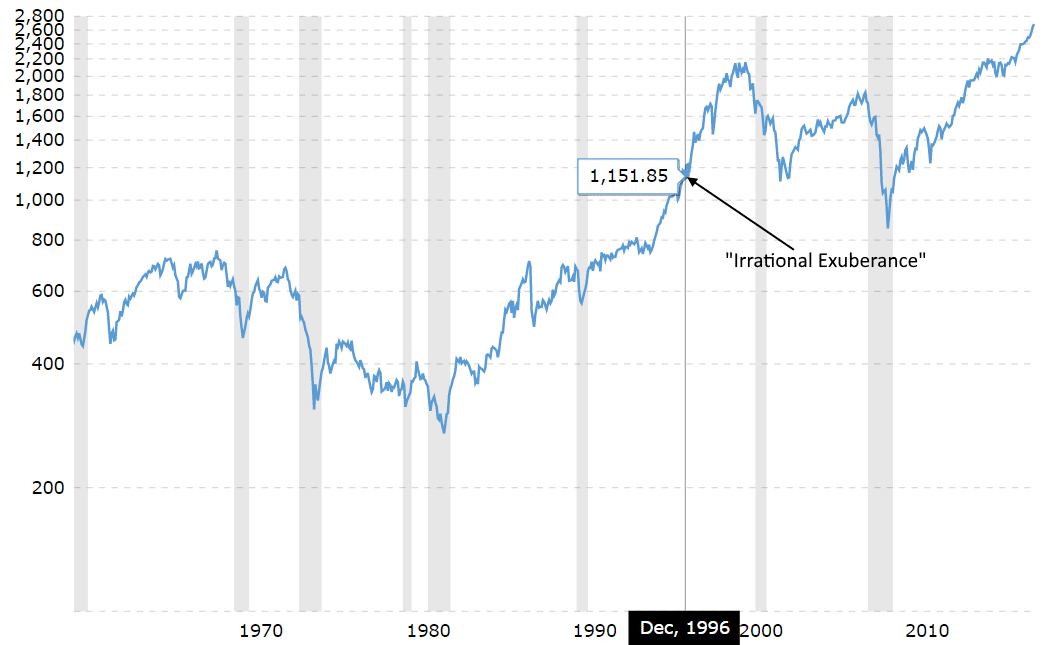 Is this time to exit completely from the markets? Is there too much valuation out there? In a quick post today we’ll take you through a couple of interesting thoughts around the markets now.

The Fear: Markets Are Going To Crash!

Of course they are. The problem is: when? It could be a year from now. It could be four years from now.  Alan Greenspan once used the phrase “Irrational Exuberance” in 1996 after markets went up in nearly a straight line, and it took nearly two more years for the market to have even a meaningful 10% correction. And then, it went up nearly 100% from that Irrational Exuberance point to nearly 2200 before crashing back to 1100 in the dotcom bust.

So yeah, it could look a little crazy. But it might just get a little crazier. And crazy enough that it goes so far up that when it eventually falls, the current price will still look a good buy!

Like the Billy Joel Song: You may be right, I may be crazy, but it may just be the lunatic you’re looking for.

But What To Do?

Your mind is a strange thing. It wants stuff in binary. Love you. Or Hate you. Buy. Or Sell. The comfort of being on one side, strongly anchored, is like a nicotine fix; we strongly desire the “decision” and the direction it brings us. This is why godmen exist, and that’s also why a large part of markets involve people just saying: Shut up and tell me if I should buy or not.

But there’s no such thing as being binary in anything. Everything has grey areas. I might love you but I don’t like that thing you do. I like a stock, but not enough to buy more of it, but I won’t sell it either. I might not always be the lunatic you’re looking for.

Meaning: You can go down to 60% equity and you’ll probably do better than:

If you stay out, chances are that you will get frustrated and get back in just when the market peaks, because you just can’t take it any more.

Then, How Should I Do It?

Some people sell the stocks that have done really well (“book profit”) and hold on to the losers, thinking they’ll get out when those stocks rise. Bad Idea.

Stocks that do well are the fellows who did what you wanted. So getting out of them is like penalizing yourself for good stock selection. If you have to get out, just get out of the losers.

But a better strategy will be to take some part out of all stocks. Going from 90% equity to 60% equity doesn’t mean you have to sell 1/3rd of your stocks. It can just mean sell 1/3rd of each company you own – so if you own 15 shares, you sell 5.

At the same time you can set up some ground rules. No stock should be more than 10% of portfolio, if you’re the diversifying kind. Overconcentration on one sector is also dangerous.

And then, you want to be meaningful. Each position should be at least 1% of portfolio. So if your stocks are worth Rs. 25 lakh, then a position needs to be at least 25,000 rupees otherwise cut it down mercilessly.

This is one of those times when you might find yourself holding way too many mutual funds. Most funds tend to buy the same stocks, if they’re in the same kind of category. So I’d cut them down to two of each kind. This is a painful process as you have to optimize for taxes and such, but it can be done through diligent use of spreadsheets.

The Reason To Stay Invested

If you’re a stock picker, you’ll always find good stocks. And reasons to keep holding on. The simplest reason to stay is that: the stock is going up. Even if you think valuations are stretched, why not just hang on while the madness keeps things totally irrational? Who cares if a stock is overvalued in your mind?

Case in point: KRBL. We bought in at around 195. At 330 we balked at the valuation and exited. It’s at 611 now, after falling about 10% from it’s peak. Even doing a part exit would have been better, waiting for the rest to decline say 20% before finally getting out. Momentum is responsible for more than 50% of returns, overall, or so I believe.

Either ways, the reason should not be: I’m buying because someone else is buying. At least, not reason enough unless you know what you’re doing. If you’re buying on tips, especially those that come unsolicited by SMS, I would recommend buying a lighter and putting fire to your money instead. At least it’ll warm you for a while.

Life allows you a few victories. You enjoy them. You talk about them. You’re proud of them.

But when you let it get to your head, you’re doomed. There are markets that make everyone look good. This is one of them.

Love your wins, but at the same time be aware that there are greater forces at work. It was not just your skill, it is a helluva lucky time. This logic doesn’t make you hurt as much, psychologically, when the market falls. Because if it wasn’t you on the upside, it probably wasn’t you on the downside either.

I have given too many fundas. My point was simply this: Even in this market you have to stay invested, even if it’s half what you would otherwise put. Staying fully in is bad, but staying fully out is worse. Keep a lower Blend and enjoy the ride!