The government is starting to change the rules of the game for digital payments and debit cards. It has now decided to pay the fees that merchants must pay banks, when debit cards or BHIM/Aadhaar are used for less than Rs. 2000 per transaction,

The Union Cabinet chaired by Prime Minister Shri Narendra Modi has approved that the Merchant Discount Rate (MDR) applicable on all debit card/BHIM UPI/ Aadhaar enabled Payment System (AePS) transactions upto and including a value of Rs. 2000 will be borne by the Government for a period of two years with effect from 1st January, 2018 by reimbursing the same to the banks.

Another part of this process is that the Merchant Discount Rate (MDR) for debit cards has been forced down by the RBI. They’ve limited the transaction charge both as a percentage and in absolute terms. The notification says:

So How Much Do People Use Debit Cards or digital transactions today?

The demonetization bit moved PoS up for a bit but it has fallen back. Even so, it’s now an impressive 13% compared to just 3% six years ago.

IMPS has also been seeing a big usage jump. However most of this is because banks have cut charges on interbank IMPS transfers. These are not exactly transactions made in shops to merchants, but corporate transfers or salary payments or such. 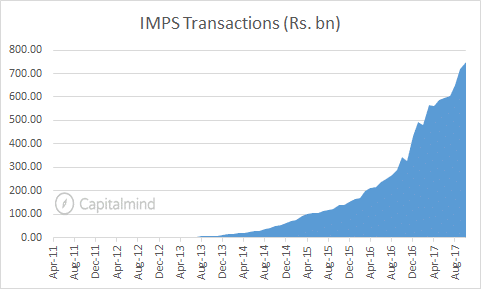 IMPS gets no change in the MDR concept. But then, an incoming IMPS or NEFT has no charges anyhow – it’s the sender that might need to pay.

UPI is tiny right now. But it will change.

The Impact: More Merchants On Board

The reason you don’t use a debit card or BHIM every where is simple: small merchants don’t accept them. And because they don’t, or they charge you “extra” for it, you prefer cash. Many such merchants are genuinely unhappy about paying banks the extra 1% or 2%. (Some are tax evaders so won’t accept cards under any circumstances and they don’t have my sympathy or attention)

For a smaller merchant, getting on board the card acceptance deal is much easier if they don’t have to pay, specially if they fall under a threshold. The small purchases will not need any MDR – the merchants will not pay. Instead, the government will pay. This is great for all kinds of merchants – from the local kirana store, to Uber and Ola (who currently bear the charges) to large format stores like Big Bazaar.

However, acceptance infrastructure isn’t free. You have to buy or rent a POS machine if you want to swipe a card. This is becoming cheaper, but it will add an additional layer of costs and onboarding time. However digital merchants (even Capitalmind Premium is one) will be much faster on onboard, and will not (hopefully) have to pay fees for debit cards.

Impact: Every Retail Shop or Petrol Pump Is Now An ATM

Technically you could now swipe your card at a petrol pump and ask for cash. Because there is no cost to the petrol pump dealer. He can pay you cash, and the government will bear the charge.

This is likely to be gamed too. If I want cash, and I go to a shop, the shop can raise a bill and pay me cash. The bill then is used to adjust something else, while selling other products for cash. This is a difficult process to uncover. But you have to weigh that against the fact that currently such merchants do everything in cash, and this way hopefully some part of it gets into the formal system.

However, do expect that the government will create some rules about avoiding misuse. Like you can’t do more than two transactions at a merchant per day.

Impact: Potentially positive for some banks, but wait.

You can imagine that banks will benefit. More usage will be paid for by the government. A bank can now encourage its customers to use debit cards, and if merchant acceptance goes up big time, such a move will change things. Banks will earn money from transactions, but merchants won’t pay: the government will. For small transactions at least.

However it’s quite likely that in the medium term, all such transaction costs are forced to go to zero. There is no transaction charge for cheques, by RBI rule. There will be no transaction costs allowed for payments through your bank account, at some point in the future. Because there is no credit risk. Merchant acquisition would have mostly been done – the costs will be paid for by lower CASA payouts of interest on balances held by merchants.

So the rejoicing has to be shorter term from a bank perspective.

The real winners are consumers and merchants. Credit card holders might actually see a decline in acceptance – simply because the merchants have to pay a fee for credit cards. And that will be a good thing – the usurious rates of cards makes it a really bad habit. For bigger merchants who sell “small” goods, it might now be time to make it more attractive for people to use cards, through bigger discounts.

This is good from a market perspective. Instead of forcing rates to zero, the government is willing to pick up the tab, for a few years, just to ensure the acceptance is large enough. Now, let’s just hope the government’s own web sites (BESCOM, for instance) stops charging us the extra 1% for using cards online.