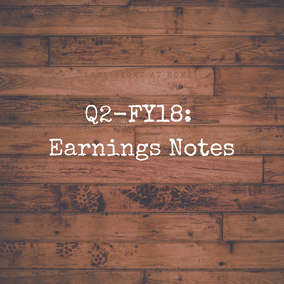 Here is a short summary from the Q2-FY18 Earnings Call Transcript of a few selected stocks. The sole objective of this post is to provide a quick short digest of disclosures relating to the company that came to the forefront during the earnings call. Over the course of this quarter, we intend to keep an eye out for the transcripts of other companies as well.
Do share your feedback/ improvements/ suggestions in the comment section below or reach us on #general in Slack if you are a premium member.
Note: Capitalmind does not take any responsibility of the accuracy of the information provided by the management of the company. Analysts may have positions in some of the companies mentioned here. Please assume we are biased.