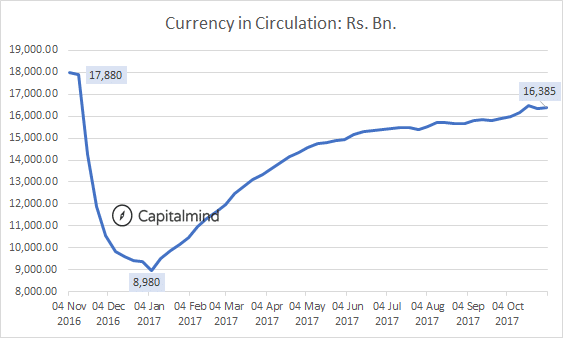 It’s been a year since Demonetization! At 8 pm on November 8, 2017, Prime Minister Modi told us all that the big notes we have – Rs. 500 and Rs. 1000 – are no longer valid currency. So then began a massive three month rigmarole for depositing cash and then eventually, withdrawing it.
None of the reasons given then were remotely valid – as it turns out, there’s still a lot of black money, there is not much fake currency and in reality, there were no people burning their cash hordes.
And over the course of a year, slowly but steadily, nearly all the cash is back into the system. Other than about 1.5 trillion, or Rs. 1.5 lakh crores. See:

But 1.5 trillion rupees is still there – as in, the cash pre-demonetization was still higher by Rs. 1.5 lakh crores! Well, here’s the 10 year chart of the amount of currency in circulation: 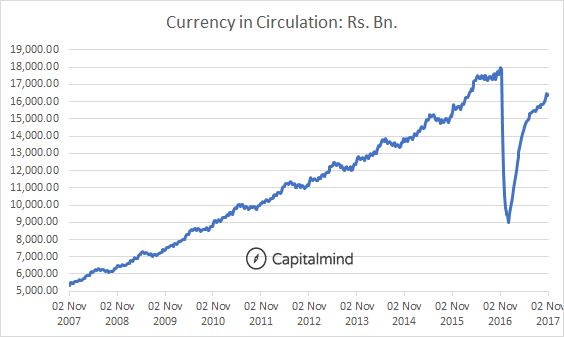 You can see here that the trajectory of cash being added back is about the same now. So in a few months, we’ll cross it all again, and all the stuff about black/white cash will continue.

Has it been good?

Selfishly speaking, it’s been brilliant for markets. Killing of the cash business meant little to the GDP apparently, even if growth was slower last quarter. And the organized economy – listed and large companies – have made the best of what was the misery of the tiny guys. Of course, many of the smaller guys were tax-dodgers too, so we did see them eliminated but so what.
A year later, a lot more people accept cards and online transfers. Demonetization can take the credit of course. And again, selfishly, this is great for those of us who do use cards a lot.
The bad thing was: Why? Do all that for nothing?
But it’s a year now, and saying it was a bad idea is apparently not acceptable. So let’s rejoice in the fact that hey, we survived it. Let the next year be better.