Note: This is a post sponsored by DSP Blackrock Mutual Fund. Please do not treat this article as a recommendation; we aim to provide information and education about the concept of Stock Market Indexes and specifically, of an equal weighted one.
This is part four of the four part series. Earlier posts;
What is an Equal Weighted Index, and How Do You Invest in It?
The Performance of an Equal Weighted Nifty Index
Understanding the risk of an Equal Weighted Index
In 1976, when the first Index fund was created by The Vanguard Group, it was referred to as “Bogle’s Folly”. After all, who would rather not pay a higher expense ratio for the ability to beat the markets that Mutual Funds promised versus just performing in line with the markets as the Index funds promised.
40 Years later, the stand of Vanguard founder, John C. Bogle has been vindicated like never before. In recent times, Vanguard is seeing inflows of $1 Billion per day and will shortly reach 5 Trillion Dollars as total asset under management. 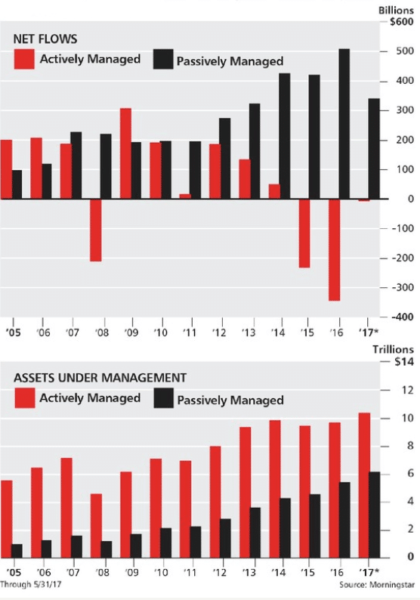 Index funds haven’t picked up in India as much as they have in the US. While most Index offerings are similar, the DSP Blackrock Equal Nifty 50 Fund is a unique offering at a time when Financials are the flavour of the market and dominate the market weighted Index.
Over the last three posts, we tried to put together data backed view points on the advantages and disadvantages of investing in DSP BlackRock Equal Nifty 50 Fund. With increasing inflows into the Mutual fund arena, out performance by active funds versus their benchmarks is on the way down. 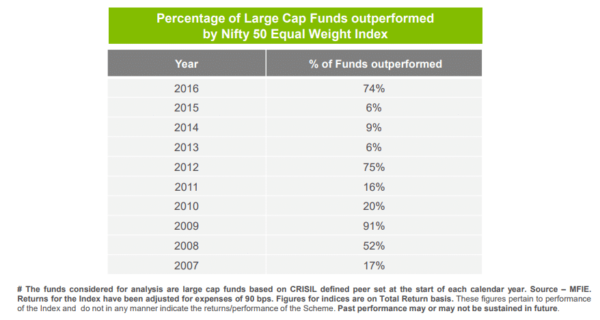 Above image, courtesy of Motilal Oswal provides a context to the ever changing sectors that dominate the Index. The original Nifty 50 has very little resemblance to the current Nifty 50 with only 15 out of the 50 continuing to be part of the existing line-up.
Private banks were only 4.4% of the Nifty in 2002 – they are now 24%. Auto was 5.6% and is now 10.8%.  Technology companies were 1/4th the Nifty in 2002 and now are just 1/9th.  Regimes change. In 10 years it can be assumed that banks won’t carry the same weight – it will be something else. An equal weighted Nifty will capture that change.
As on date, Nifty Small Cap 100 Index is up 38% year to date versus a return of 24% for Nifty 50. While exposure to Mid and Small Cap Indices look great during times like these, it’s actually the large cap Indices which deliver better risk adjusted return when looked at longer time cycles.
Depending on an Investor’s appetite for Risk, DSP BlackRock Equal Nifty 50 Fund can be a useful fund to have in one’s portfolio. While no miracles could be expected, forward returns may not be significantly different from those achieved in the past. A small allocation today can be increased if, as in the west, index funds start to perform better than actively managed funds.
Since Index funds are not actively managed, the expense ratio is lower than active funds. DSP Blackrock Equal Nifty 50 Fund will charge for their Direct Plan TER approximately 40 bps while it would be a TER of approximately 90 bps for the Regular Option.
Our View: We believe while the offering is interesting from point of diversification, the fees are way higher compared to alternative (non Equal Weighted) Index funds. UTI Nifty Index fund charges for Direct Investors a Expense Ratio of 0.13% and 0.20% for Regular. The greatest benefit of passive investing lies in the low fees which is sadly missing out here. We hope that the fund shall reduce the Expense ratio going further
There is a new fund offer for the DSP Black Rock Nifty 50 Equal Weighted Fund in progress. Capitalmind is being compensated for writing this post, so please assume our bias. We will have more details on such index performance in subsequent posts, but please do note that past performance may not be repeated. Please note: The views & opinions expressed in the article are that of the author and not of the sponsor.

EP40: How Smallcase helped create a new generation of investors

Episode 40 and we’re speaking to the fintech firm that just raised 40 Million dollars last week - Smallcase! Deepak sits down with co-founders Vasanth and ...

EP39: Why we run a PMS and how we do it differently

What is a Portfolio Management Service? How does it really work? Do they actually benefit their clients? In this episode, Vashistha and Deepak explore PMS' ...

China cracks down on tech companies. Will India benefit?

China just cracked down heavily on its homegrown technology companies. It started with the Ant Financial IPO  in November 2020; one of China's biggest tech ...