Note: This is a post sponsored by DSP Blackrock Mutual Fund. Please do not treat this article as a recommendation; we aim to provide information and education about the concept of Stock Market Indexes and specifically, of an equal weighted one.
In April 2017, India Index Services & Products – who maintains Indices at the NSE, launched the Nifty 50 Equal Weighted Index. The Index has the same stocks as of Nifty 50. But all stocks in the Index carry equal weights rather than being market-cap based.
Stocks will move every day, so the index is rebalanced every three months to bring everything back to equal weights.
Here’s how the equal weighted index has performed: 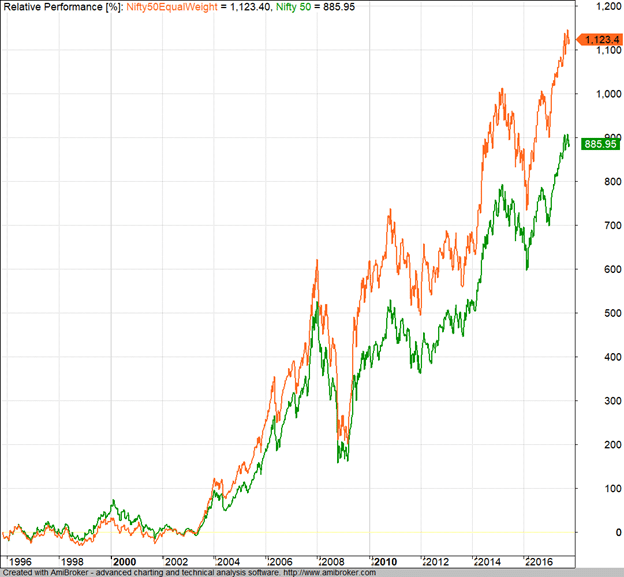 The chart above compares the performance of Nifty 50 with Nifty 50 Equal Weight Index. While both carry the same set of stocks, the outperformance by the Equal Weighted Index over the Market Cap Weighted is phenomenal.
What we tend to miss out on long term charts is the short term gyrations. So, instead of looking at the whole period at a glance, let’s break it down. 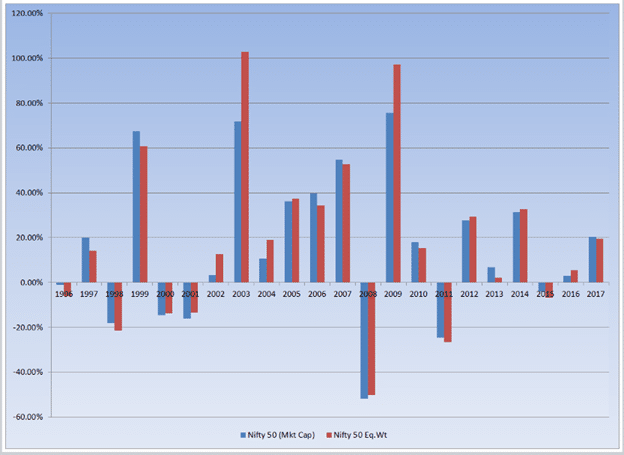 The above chart is the yearly return comparison between the two. Two years stand out – 2003 and 2009. Co-incidentally, these two years have been the start of a longer bull market.
“Bull markets are born on pessimism, grow on skepticism, mature on optimism and die on euphoria.” – John Templeton
At the beginning of a bull market, new sectors / themes get identified which lead the forthcoming rally. These are the disruptors who lack weight at the beginning but as market catches up with the new age companies, start gaining market share at the cost of existing players.
As market moves away from undervalued levels, the outperformance of Equal Weight over Market Cap Weighted Index decreases substantially. On the other hand, when markets are closing in on the peaks, it’s the Equal Weighted Index that starts underperforming the Market Cap Weighted as stocks that are expensive become more expensive. A change in the regime – of who leads a rally – will help equal weighted indexes, and a continuation by leaders gives a market-weighted index an advantage.

There’s no point taking returns over long periods of time. Let’s see three year rolling returns. Any point in the below graph indicates the absolute return if you had invested three years earlier. The three year rolling returns above showcase a clear change for the period post 2008. While the pre-2008 was one where Equal Weight saw a pretty significant return premium, post 2008, the 3 year returns has been closer to Market Cap Weighted. At this point, the equal weighted index actually underperforms the Nifty.
One key reason for trying to differentiate from Market Weighing is to lower the risk of a specific sector / stock pulling down the index or contributing above its weight in terms of volatility.

Does Equal Weighted result in lower risks, especially in times of market falls? 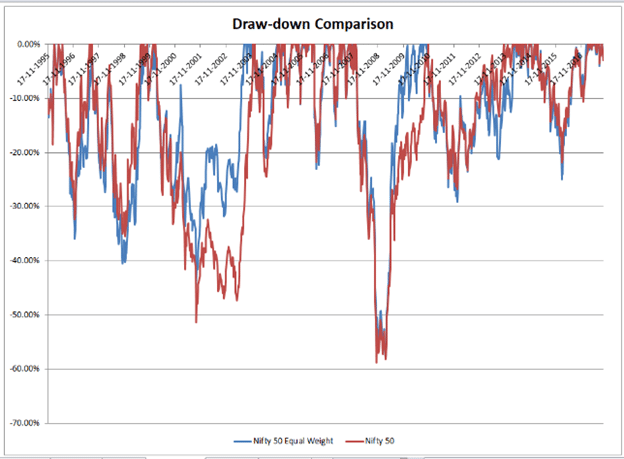 The chart above plots the draw-down seen in the respective indices from their highest previous point. As the chart amplifies, we don’t necessarily see lower risk in the Equal Weighted Index. On the other hand, in recent years, we have seen increasing instances of Equal Weight seeing a higher draw-down than Market Cap.
This could be primarily due to weak stocks in the Index falling more than the stronger ones. While Market Cap weighting ensures that a few stocks can hold aloft the index even if the rest of the pack don’t perform, this isn’t the case with Equal Weighted where we expect and require everyone to contribute equally.
The  DSP Black Rock Equal Nifty 50 Fund which mimics the Nifty equal weighted index is likely to face these headwinds in terms of index drawdown and relative risk compared to the Nifty itself. However, the indicators in the US indicate that Equal Weighted Indexes have beaten the market cap weighted ones by a reasonably large margin (read article) even if the risk is marginally higher. Will India go down that route?

Note: This part is purely Capitalmind’s view. There is no sponsor input here.
An equal weighted index investment, in our opinion, should be less than 10% of a portfolio, because active mutual funds still outperform the index.  When that changes, it will be time to increase the allocation to such indexes. We do expect regime change, but a large number of stocks that will outperform are not yet part of the Nifty 50, so a broader equal weighted index may also add value.
There is a new fund offer for the DSP Black Rock Nifty 50 Equal Weighted Fund in progress. Capitalmind is being compensated for writing this post, so please assume our bias. We will have more details on such index performance in subsequent posts, but please do note that past performance may not be repeated. Please note: The views & opinions expressed in the article are that of the author and not of the sponsor.
Disclosure: Capitalmind is now a SEBI Registered Portfolio Manager.