The Indusind merger with Bharat Financial took ages because BFIN was looking out for a merger partner forever. The rumours were in 2016, and things finally moved with Indusind in October 2017, a merger that offered 639 shares of Indusind for 1000 shares of BHARATFIN, which was earlier known as SKS Microfinance. Here’s Tamal’s story of what really happened.
This is a sad end to a company an IPO at Rs. 950 in 2010, and the stock actually listed at 1040 then. From then to now, the reward for a shareholder have been ZERO. Unless, like Westbridge/Sequoia, you got in early and offloaded stocks through the time it recovered from the lows. The stock itself has been a remarkable one if you picked it at the lows, but for the person who bought at the IPO, blah. 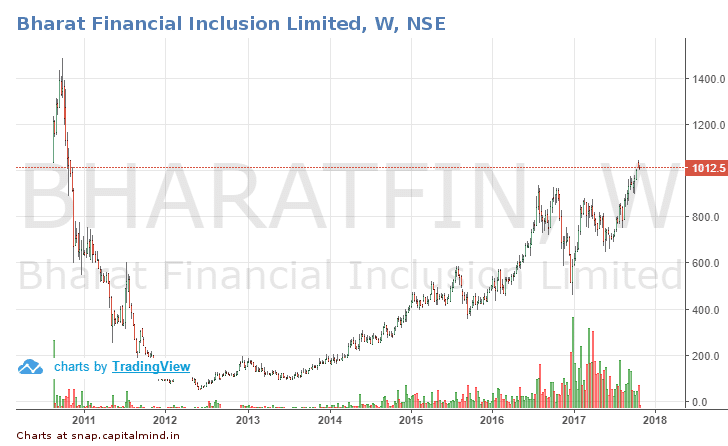 Ramesh Damani, Rakesh Jhunjhunwala and Porinju Make Their Bets : Diwali always has the media force market biggies to show what they’re buying. Ramesh Damani wants small housing, airlines, gambling and QSR stocks, apparently. The legendary Rakesh Jhunjhunwala likes Fortis and Pharma, and thinks the market should return 15%. The relatively new big investor, Porinju Veliyath of Equity Intelligence, likes Zee Media, Balaji Tele and GVK Power.
Of course if you start looking you will find bets on every stock in the market. And everyone’s bullish! (Let’s hope that isn’t a bad sign)
The Analyzers: In an interesting analysis of Balaji Amines, a stock that’s done very well in the last year, Dr. Vijay Malik speaks of their relatively high margins, the weird hotel business and the fact that the management takes as much compensation as is allowed by the law.

Raymond Ltd – The complete headache. Lots of observations and that too only from Annual Report FY 16-17. Older ARs lots more of the same. pic.twitter.com/eEEHBEj9qk

Also, the boring details of how Cyrus Mistry was sacked. And a primer on historical volatility versus implied volatility. Finally, how China’s cracking down on pollution by shutting down “tens of thousands” of factories.