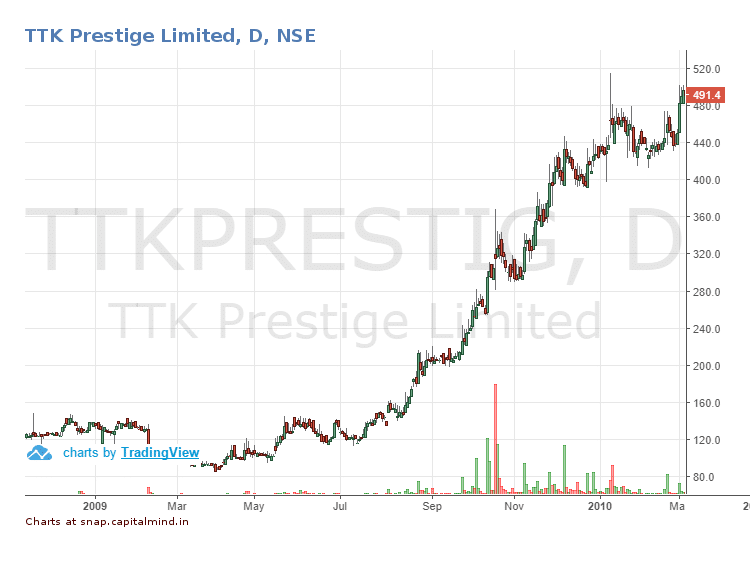 In a discussion on Capitalmind Premium Slack, we started speaking about investing on stocks based on stories. Sometimes you hear a story – that something is changing in an industry. The fundamentals don’t yet show anything. The stock prices though, have started to move up. The story is strong. But should you follow?
Typically at this point, the stock prices are making no sense. Like they are making no sense in a lot of stocks today. Bajaj Finance was likely to sound expensive two years back, and it’s up 4x since then. The story was of reinventing credit, that banks weren’t pushing loans to retail customers and that technology was changing the game. Bajaj Finance is worth over Rs. 100,000 cr. now.
But today we bring you a story of two stocks that rose because of a story and then….(not spoiling it). Read on.

The Saga of Jai Corp

In 2006 there was a story. That Mumbai would get two new SEZ (Special Economic Zones) which were being setup by Mukesh Ambani of Reliance Industries. Ambani had these properties of 35,000 acres in Navi Mumbai which was partly also owned by Ambani’s close friend, Anand Jain through his company, Jai Corp.
There would be two SEZs, it was told, a port (Rewas) and an Airport in Navi Mumbai. They’d have a diamond trading bourse, a financial center, an IT park and what not. And in all of this, partnering with the big Ambani, was Anand Jain’s Jai Corp. While it was primarily into yarn and corrugated steel and packaging products, it had started to move to the infrastructure product and real estate space.
Jai Corp was listed. And it had been doing well. The stock had gone up 6x by the end of 2006: 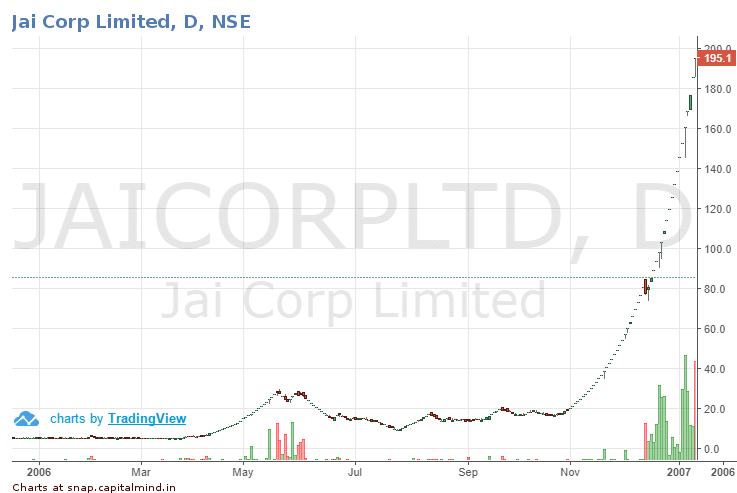 There’s a story. And there’s a rising stock that’s gone up 6x. But there are no fundamentals. The stock only seemed to have “other income” but the land was real, and promises seemed to be realizable.
The typical answer is: Come on, it’s at a 52 week high! It’s gone up 6x in a year! Why would you buy such a stock, don’t you want to buy a stock that is at a low?

And Then It Comes: 2007, Fundamentals and All

2007 was a bumper move for the stock. News started rolling in about how this story was actually real, that there would be an airport, a sea link from Navi Mumbai to South Mumbai, and all sorts of believable stories.
Jai Corp’s results were fantastic too. Other income formed most of it, but profits were up 10x.
And the chart, oh, the chart: 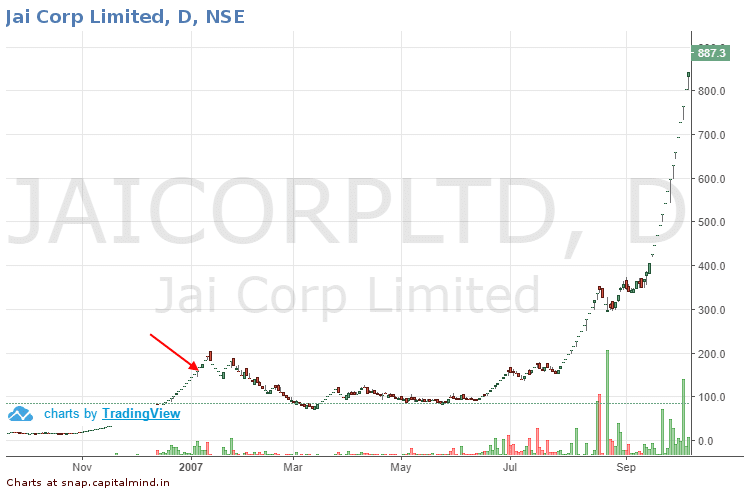 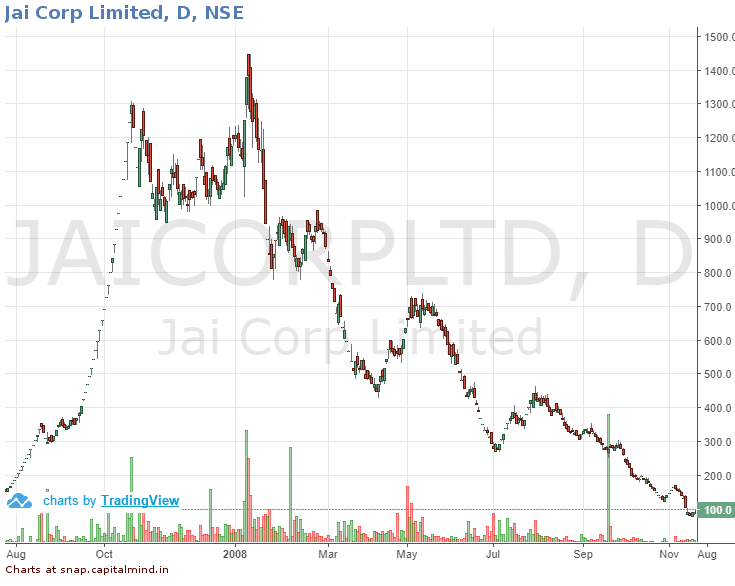 But What About the Story?

There’s still buzz about an airport in Navi Mumbai. There’s land in some SEZs. There’s potentially some move on the port. But the fortunes of Jai Corp haven’t been quite as meaningful. If you aren’t able to execute, investors will lose patience. The story hasn’t died, but the stock has gone phus. It’s here now: 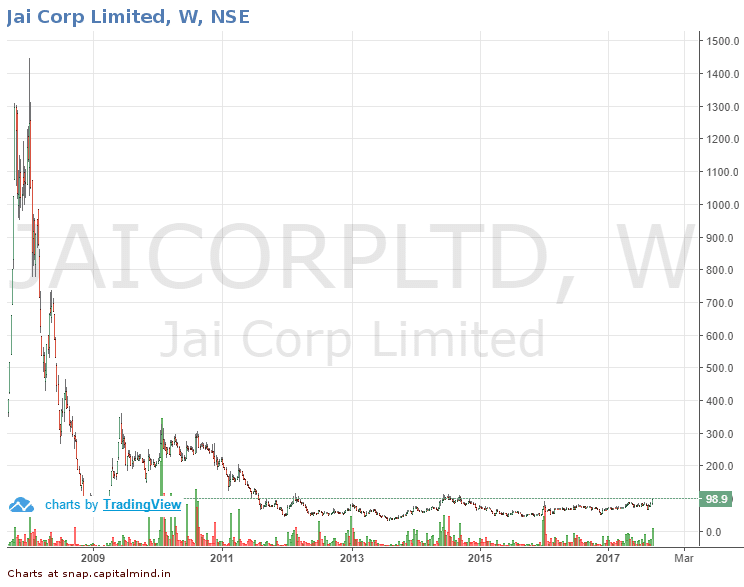 Even after a 15% jump today, it’s at half the price it was in Jan 2007, before its meteoric rise. Earnings too have died, from the 128 cr. profit in 2008 to a 14 cr. loss in 2017.
The point: A story is great to lift a stock up. It needs execution to pull it through. But the rise can be meteoric, just pulled by the story.
The other point: Would you really care to buy if a stock has gone up like 2x or 5x? Perhaps the sustained story is worth a trade. Even if you lost 20% it may be worth it if the stock could give you a 5x or 10x return on the move.

The Other Story: The Pressure Cookers

In 2009-10, the story that was doing the rounds was of a change in middle-class India. From old forms of fuels (wood, kerosene) people were moving to cooking stoves. And that India was moving towards better cooking equipment. Like pressure cookers.
The biggest names in India were Hawkins and TTK Prestige. Both the stocks had started to move up. The story was strong and believable. And results had just shown earnings were nearly double. Look at the stock chart now.

At 480, it seemed like an insane time to buy. We were talking of a stock that was up 4x in a year, from 120. Even doubling income can’t make up for that, can it?
Let’s just say this: It can.
The stock went absolutely berserk after that, stopping only at Rs. 3,000 for a breather, and a few years of volatility ensued. The stock is now at Rs. 6300, having just completed a buyback at Rs. 7,000. 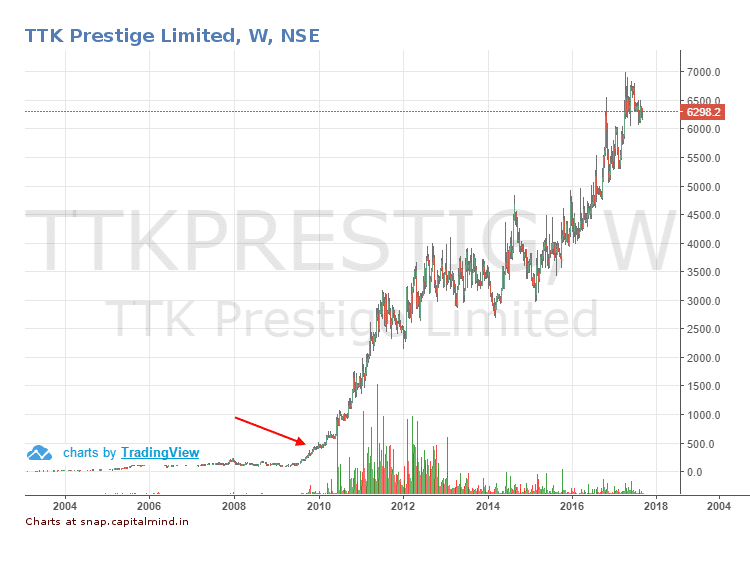 The story was followed with great execution, as the company took profits from just Rs. 20 cr. in 2009 to more than 150 cr. in 2017. The stock has also seen a major P/E expansion, since the price is up 50x since then.
The point here is: Stories raise stock prices. Stories can keep P/E ratios at insane levels. In many cases, it may not be an agreeable story, or you may feel that the stock is being manipulated. And it may well be.
But the potential gains are massive, if the story sticks. Even without any fundamentals. Too many stocks go up without proper reasoning today, but in some cases the reasoning will be visible tomorrow. In others, the stock will collapse because the story didn’t work out.
In both cases, stock prices can go absolutely nuts. 2x to 10x returns are not uncommon. Even if you get in after a 5x rise in price, the returns can be astounding. Even one or two stocks that return 200% can have a significant impact on a portfolio.
Stories are powerful beasts – and even when they don’t work out, they can give you enough of a return that makes the entry worthwhile. You’ll lose in some, but you can limit that. But when you win, it can be big enough to override all of that loss.
The biggest folly in markets is to believe you know everything; you never will. In that vein, a stock that’s up 5x is telling you there is something you don’t know – and like we’ve seen in Bajaj Finance, Avanti Feeds and so many others, the inexplicable can become even more inexplicable and still turn you a ridiculous profit.