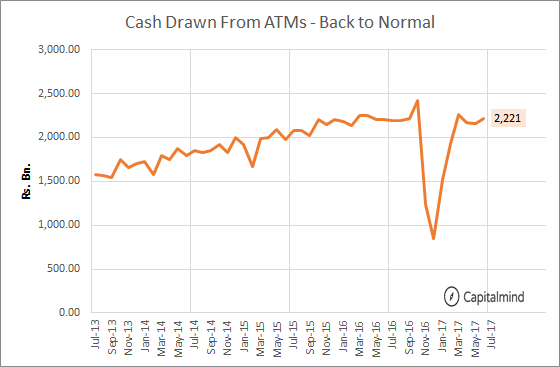 Today in charts we track the status of cash and payments in the economy. After reducing the cash in the system to nearly half through demonetization, the RBI has printed and circulated nearly all of that cash back. Growth rates too have fallen, so the demand for cash seems to have slowed. 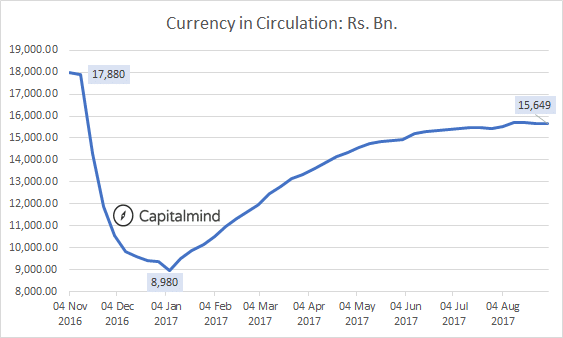 With over 15 lakh crore (15 trillion rupees) of cash back out there, and slowing demand for more currency (see graph), we should be seeing a more “normal” cash level in the system. But given that people still have to transact, what are they using?
Here’s some charts that speak about the change (or lack thereof) of the way people are transacting.

Monthly transaction data from the RBI shows that India still loves to use cheques. The “blip” of demonetization is barely visible in the cheque transaction data. We do about 6 lakh crore (6 trillion) through cheques each month.
Note: The real big daddy is RTGS. That has more than 110 lakh crore (110 trillion) rupees every month. But since it’s a gross figure and used by larger corporates and banks, we ignore that for now. 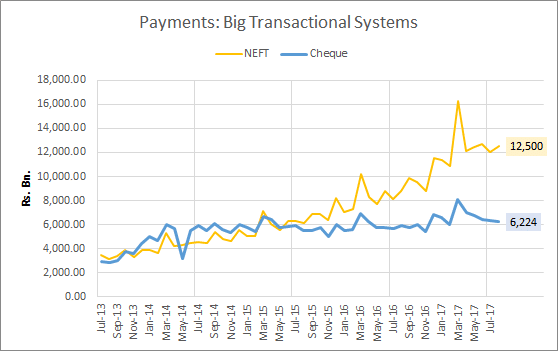 With above Rs. 65,000 cr. per month for IMPS transactions we’ve seen a big improvement in the volume and size of the quick transfer mechanism. This is nearly double the amount used in IMPS pre-demonetization, in October 2016.
Cards at POS (which is used to actually buy stuff, rather than as an ATM) is now at Rs. 73,000 cr. or 730 billion. This is down from highs made in December 2016, but the trajectory seems to be upward. 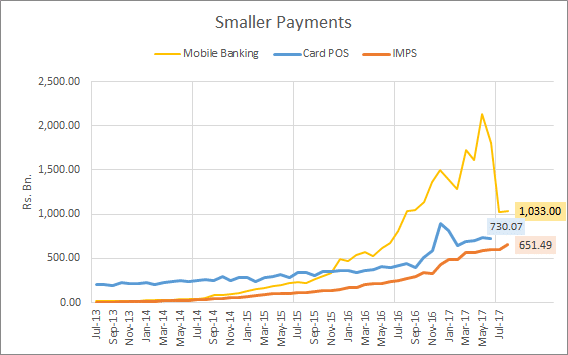 Mobile banking has seen a strange spike, which may have been because of wrong classification of data. We’ll see how that evolves, but it’s definitely taking big leaps forward. At Rs. 103,000 cr. (1.03 trillion) India seems to truly be a mobile focussed economy.

Most card usage is still not to pay for stuff. It’s to draw out cash. More than Rs. 220,000 cr. (2.2 trillion) was drawn from ATMs in the month of June, and this as about the same value pre-demonetization.

Basically, there’s no reason to believe India’s using less cash – it’s about the same amount. But we can say that the amount of cash being drawn hasn’t gone up tremendously either.

Finally, the Wallets lose all the sheen

Wallet companies made a good deal of transactions during the cash crisis. But those wallets are slowly losing the early enthusiasm for usage, and we seem to be back to the banking cadre: IMPS/NEFT, Cards or Cheques. Note that PayTM and Airtel have moved their wallet customers to banking customers (or at least most of them) which would explain the lower transactions here as these are big players. 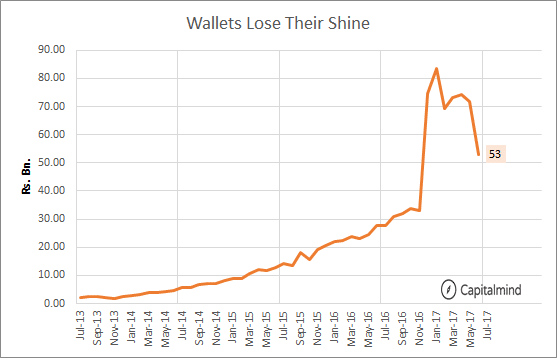 A system that’s been so reliant on cash has taken it on the chin and rebounded fast. The winners seem to be the IMPS, Mobile Banking and NEFT avenues. Cash too is back as a transactional system. We have impressive growth in card usage at POS as well.
With the increase in the number of banks, we have many new players (and some old players) ready to waive off transaction charges on the electronic payment framework. This should further help in more acceptance and usage of electronic money – and hopefully, our cash affiliation doesn’t grow as the same pace that it used to.
Notes:
Rs. 1 trillion = Rs. 1 lakh crores.
Rs. 1 billion = Rs. 100 crores.
Adjust accordingly. We have used both notations.