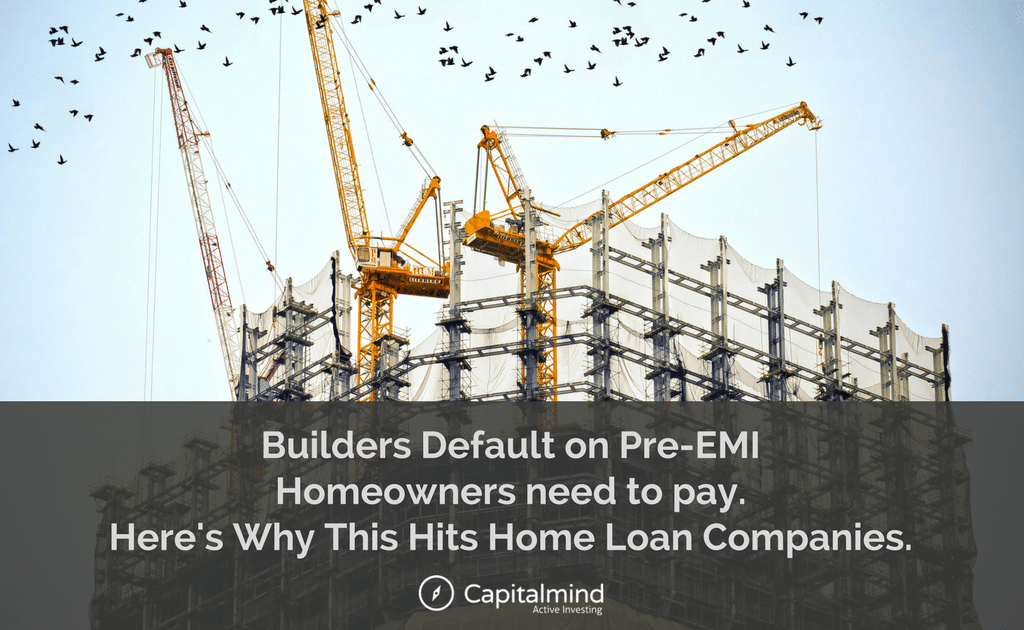 It just got real. Four years ago, we wrote of a problem in homelending. That banks can come after you in case your builder defaults in paying “pre-EMI”.
The concept is simple. You buy a house that’s going to be constructed. Builders offer you a special – that you take the loan but they pay interest till the time the house is handed over. You’re happy, for you start paying only after you get possession. The builder is happy because he gets a loan at a much lower rate than he can, because his is an industrial loan and your’s is a subsidized lower cost loan. The bank is happy because they are up to their neck in lending to builders so they get to give another loan to a builder, but you are on the hook for it.
That’s all fine. Until shit happens. And it’s happening.
JP Infratech, which has been building around 40,000 apartments in Noida, went belly up. There is now an NCLT appointed resolution professional who’s trying to resolve the problem, as in, trying to help banks get their money back. What if you had an arrangement that involves the builder paying the “pre-EMI” on some apartments already sold?
Answer: You have to pay the pre-EMI. The bank or lending company will come after you now.
And that’s happening with another builder that was hit: DSK in Pune. A Moneylife note says that Tata Housing has told borrowers that because DSK, the builder, has defaulted on paying the pre-EMI, they should do so on their own.

But what’s the problem in paying?

The builder has defaulted. And he’s not finished the project. You will pay interest on a loan given for a property that isn’t being built anymore because, well, the builder is in default.
The point is: Would you continue to pay interest if you knew the property wasn’t going to get built?
In JP Infratech’s case, the resolution professional has asked owners of about 27 apartments to please submit their claims before August 24. Two days from now. (see post) Even if you did that, there’s no guarantee of any refund. Or any assurance that the house will be built. Just a claim that you, along with some 20 banks and hundreds of other homeowners, are people that JP Infratech need to pay back.
The problem is also that if the resolution professional decides that all apartments will now be sold to the highest bidder and that you will get your money back after all this, eventually, if the money earned is divided proportionately. If that happens even in record time, and they are only able to recover 60% of the money owed, then every one will take a 40% hit.
Meaning, you have to pay pre-EMI’s until the resolution process is complete. And after that, you may not get your money (your down payment plus the bank loan taken till now) back in full, but you still have to pay the bank back in full.
So it’s quite likely people don’t pay at all. They can stop their pre-EMIs by emptying their bank account and giving instructions to their bank to stop until further notice. The lender can hit their CIBIL score hard, but if the choice is between a bad CIBIL score and a Rs. 40,000 pre-EMI on a property you will never see, the choice is reasonably obvious.
Already, in JP’s case, people are saying this: No Home, No EMI.

So What Happens to Lenders?

Everyone thinks lenders to housing are pristine. The stock prices of players like Canfin homes and DHFL and Indiabulls Housing have been close to all time highs, and their default rates low.
If the builder bubble goes bust, then there is a cascade impact. First, that the unsold apartments of these builders will have to be dumped on the market. That will crash prices. If prices crash, other builders can’t sell their properties and go into default, and their borrowers are again hit. This will be in slow motion and could take years, as it has been over the last few months.
The impact to lenders is that their precious home loan borrowers become NPAs. And this is a huge market. Homeloans are over 20% of all fresh lending in a year. And it’s the fastest growing loan segment of any reasonable size. The hit will not be just to banks, but also to home lending NBFCs.
Wait, don’t panic just yet. Home loans aren’t in default yet. (They’ll take 90 days to recognize). The strategy of homeowners will happen only after a few months of EMI payments (because no one wants to default, they just do it after they realize that there’s no house forthcoming and everyone else is doing it). Builders aren’t yet defaulting in droves either.
But the situation has taken an ugly turn with JP Infra’s default and NCLT resolution. A buyer will only come and take over assets if they get it really cheap. You can’t take your apartment until it’s done – from flooring to electricals to plumbing – and it won’t get done because the builder has no more money. A bank won’t attempt to finish it for you. The resolution professional just wants everyone to take a haircut and go back home with something. No one, not the bank, the builder or the resolution professional, wants to build your house and hand it over. That reality takes some time to sink in.
Eventually the warning here is for multiple people:

The government will eventually need to ensure there is a smooth resolution here. But even the government can’t build a house for you (and you probably don’t want them to), so at best they will try and protect you from a home finance company’s attempts to take over any other property you have.
Note: while we paint a sorry picture, please note that this is only a warning. As we have seen in the past, there can be a simply easy resolution, or the government can step in and stem the damage. Either ways, this is not a call to sell shares of certain companies, or to not pay EMIs or such. It’s just a warning signal based on our interpretation. We would love to hear your thoughts.