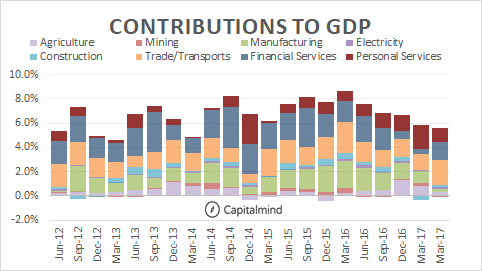 We seem to have a problem. The GDP data that we’ve got is bad, with growth going to a low 5.7%. This is the lowest GDP growth number since March 2013, four years ago. Even worse, nominal growth – that means, including inflation – is less than 10% for the first time since December 2015. 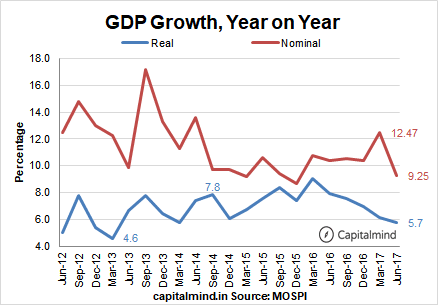 Growth has continuously slowed since March 2016.
What is also interesting is that the Trade and Transport sector did the best at 11% real growth. But Manufacturing barely moved, at +1.2%, Agriculture and construction were around 2% and Financial services came in at around 6.4%. Mining seems to have contracted. 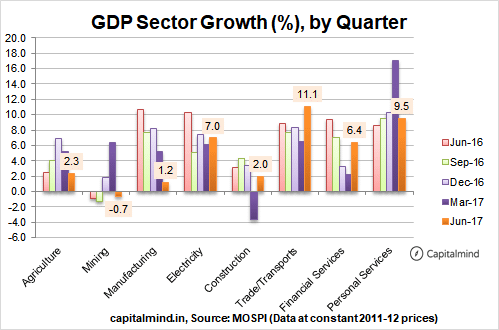 From a component perspective, we saw a continued increase in imports but a drop in export growth, so this takes away from GDP (GDP involves subtracting imports from all other components so a higher import number without a correspondingly higher export number makes it worse).
Investments are flat – and inventories are too small in an absolute level to be something useful. 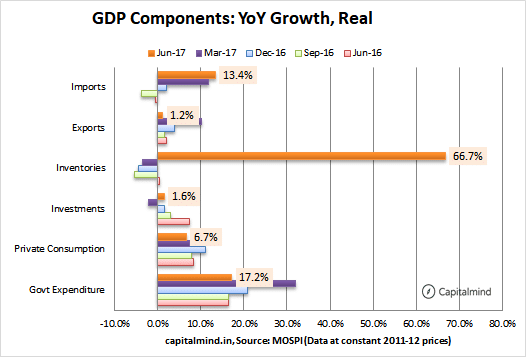 The big problem here? Drop in private consumption growth.
India’s GDP is about 60% private consumption. When growth there drops, it hurts everything else. And at 6.7% real growth this element seems low.
Also, government spending has not grown as much. This could be because the bulk of the change happened in the March quarter.
Just three sectors made up most of the growth – personal services (includes govt services), Financial services and Trade. Everything else was blah.

You might imagine that we had some impact of a bad monsoon earlier, or that this quarter itself is not a big deal, we bring you Trailing Twelve month growth as well. If we added up four quarters and then compared it back, we still have slowing growth at 6.6%. 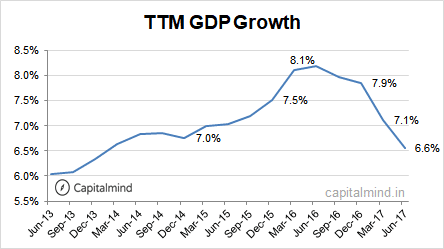 Our view: Does anyone care anymore?

Short of a nuclear war, the market doesn’t care about fundamentals. The economy could slow down to a crawl and you could see company profits collapse, but the market is driven by a force that doesn’t give a damn: Liquidity.
Money flow has slowed in one area: Foreign investors haven’t liked equities in September.
But as economies go, this is a lousy GDP Growth number. We probably deserve a slowdown anyhow. With GST, the roll-down impact of demonetization and low credit growth, the macro numbers will look bad. We do seem to see a recovery in imports (which, hopefully, is not gold only) and we are seeing strength in Trade and Transport. That’s not quite enough, honestly, to offset the drop in other sectors, especially manufacturing. Let’s just say India’s growth is slowing, and hope for a cut in taxes or something of that order to kick start it again.