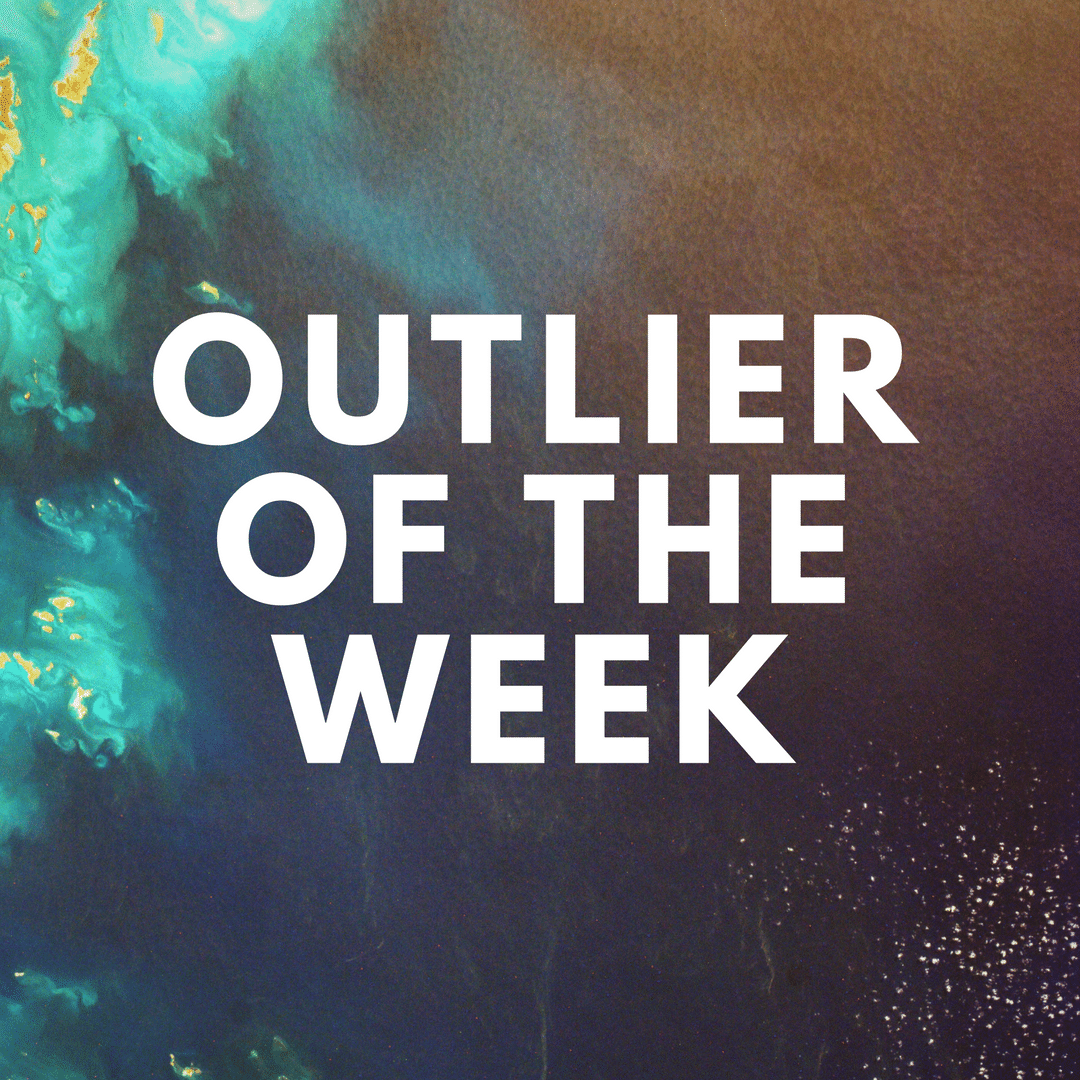 We all want to be healthy. Some of us want to have a sculpted body, but most of us want to achieve fitnees without the need to sacrifice much, especially in the area of food or time.
The word Gym, a slang used for the word gymnasium is the latinisation of the Greek noun γυμνάσιον (gymnasion) (Source:Wikipedia). From early years, Physical exercise was seen as necessary and while the principal reason in those times was to be prepared for battle, over time, the requirement of physical fitness has attained over time.
Physical fitness these days starts at the school level where PT is compulsory for most kids. But once out of School, it’s literally left to you to keep yourselffit.
While most of us are familiar with modern gyms, they have been part of folklore from ages. Wrestling was a popular sport before Cricket became the mainstay in India, and the place for their practice was called Akhara’s. Similar boxing gyms came into existence in the United States of America in early 1900’s.
With growing interest in personal health, Gyms suited for those who aren’t into sport started developing over time. India has seen a slow growth of Gyms over time as youngsters particularly look at it as a way to build body and muscle.
Talwalkars Better Value Fitness Ltd, popularly known as Talwalkars traces its roots to the first gym set up by Mr. Vishnu Talwalkar, the late father of current CEO of Talwalkars Health Clubs. From there, Talwalkar has come a long way.
The company debuted in the markets through an Initial Public Offer in 2010 offering shares to the public at a price of 128 per equity share.
Since then the company has shown steady growth. though this growth has also come with a substantial rise in Debt. In 2010, on the eve of the IPO, the company had a Debt outstanding of 20 Crore. Today, the company has a Debt outstanding of 362 Crores.
The company is currently seeking shareholder approval to issue 13,00,000 Equity Shares (4% of the company) on preferential basis to promoter group. In addition, the company is seeking approval for increasing the borrowing limits as well to Rs. 675 cr.

A likely trigger for the stock could be the forthcoming demerger of Lifestyle business from the company into a separate company. 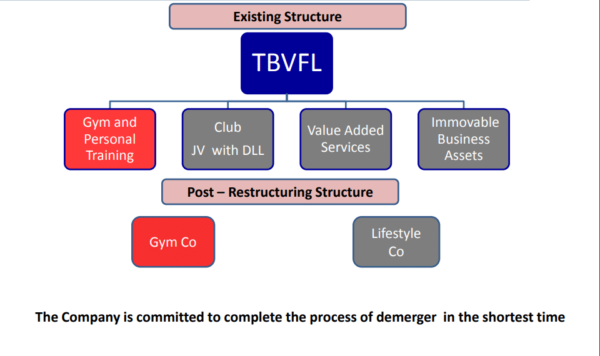 While the main bread and butter of the company is in the Gym business, it has over time diversified into ancillary value added services such as Reduce / Nuform / Joint Venture with David Lloyd Leisure / Zumba / Zorba among others.
The company intends to divest itself of the Gym business into a new company while the rest of the entities will continue to remain in the current company.
The rationale for the merger is for better focus of business as well as unlocking value for shareholders. The real reason though could be an amicable split between the Talwalkar group and the Gawande Group in the future.
The Talwalkar family currently holds through its family members 19.74% stake in the company while the Gawande group owns 18.21% stake. A clean division would in all probability be in the interests of all parties concerned though for now this is nothing more than pure conjecture.

While earnings aren’t smooth on a quarter to quarter basis, the company has shown a steady growth over time. Better utilization of assets has meant a steep hike in terms of operating profit margins. 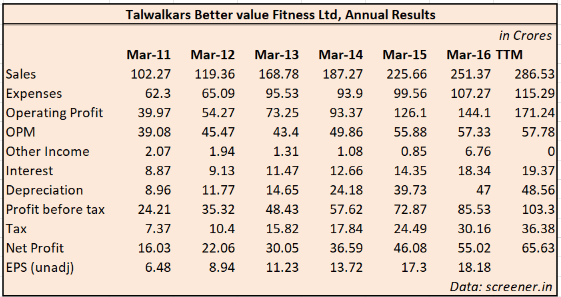 The stock has seen sharp swings over time and yet has literally gone nowhere since its first post listing rally. De-mergers sometimes can add a lot of value as it allows investors to buy a purer form of business than one which is a jack of all. Outliers are not recommendations. We just take a quick dive into a stock to understand what it is about. Talwalkars is a well known brand, but the stock has not scaled in ages, but sometimes the price tells you things that news will not.