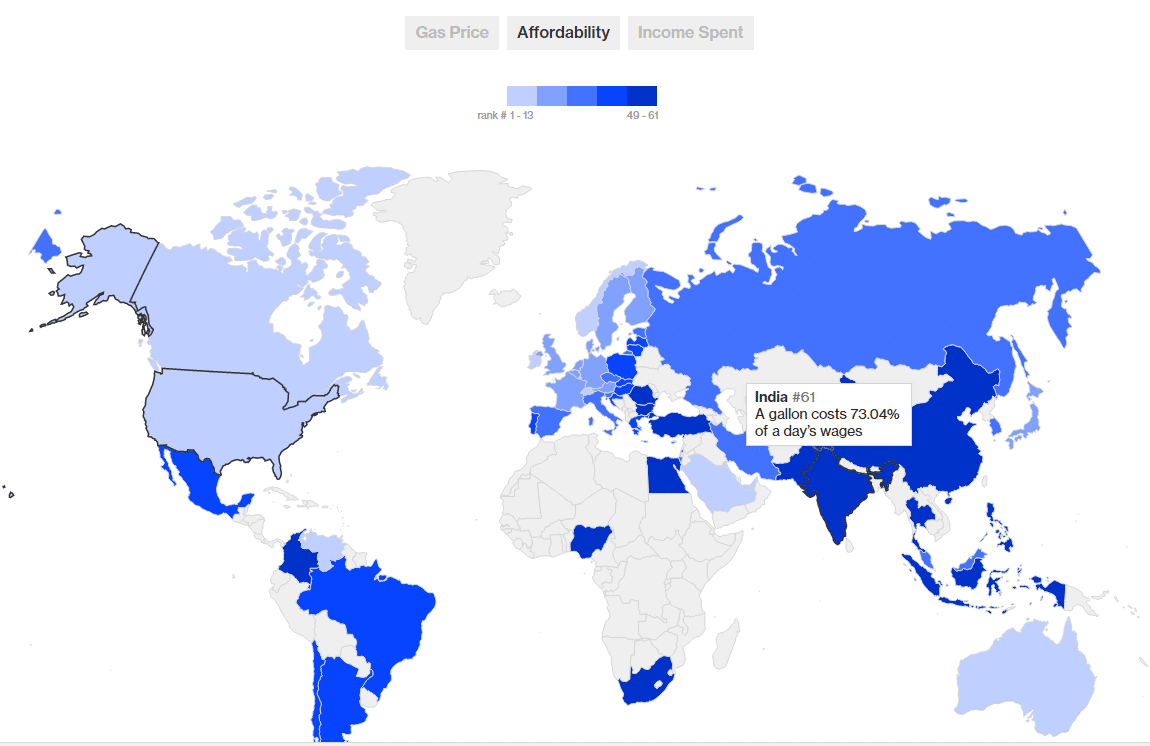 Bloomberg has an interesting piece about fuel prices around the world:

India has one of the highest costs of petrol in the world in terms of affordability. The price in dollars is different in many countries, due to taxes, and India isn’t the highest; Norway, an oil producer, is the highest at $7 a gallon (that’s about Rs. 140 per liter) But Norway also has one of the highest per capita incomes of the world – so cost of petrol is about 3% of daily income.
India, where a liter of petrol costs Rs. 67 to 70, you find that the cost of gas is about 73% of income. This is way beyond any other country, and the second is Pakistan at 60%.

India’s fuel costs are not high because oil is expensive. It’s not. In fact, it’s been stable at $50 per barrel for a while. But the cost is high because if world oil prices go down, the Indian government increases the excise duty on fuels so that the pump prices remain high. And if world prices go up, they don’t cut the duty because come on who will let money go?
As you can see, petrol taxes are about 53% of your retail price.

The only good thing about a high fuel price is that it might push us into using less fossil fuels. But you would imagine that people would be using electric vehicles and public transportation like crazy – but there is hardly any focus on public transport and the private research on EVs is all happening in countries that can easily afford the petrol. (Maybe they spend less on this stuff which leaves more money in their pocket to spend on the research? Something to think about.)
Note however that Petrol consumption continues to go up in the country, growing at about 10% – so the measures haven’t really helped curb consumption. Diesel consumption continues to grow around 8% a year.
The government can cut taxes whenever it wants but it will not do so until there is a crisis. The higher cost of transport (relative to other countries on a per-capita income basis) reduces the discretionary income in the hands of a consumer, which is what spurs other forms of consumption. However, the high cost of government – which is going to only increase after bank bailouts, farm loan waivers and lower dividend income – will ensure they tax what you cannot afford to cut out from your life: fuel.