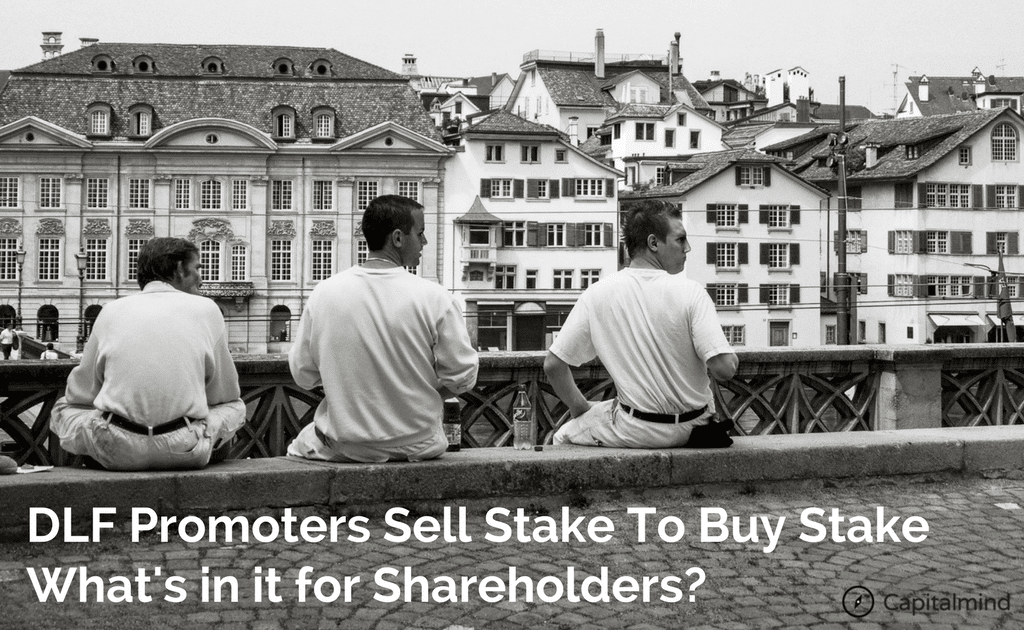 DLF finally announced something that it had announced 8 years ago, but it hadn’t completely happened yet. (But it’s not yet final anyhow, so the game continues)
The idea is simple: That DLF’s promoters would sell some shares to GIC Singapore. And then use the money to buy back shares in DLF as a preferential allotment. And that will basically help them reduce debt. (We wrote about this last year)
This is a very roundabout method to reduce debt, one thinks. Why not just sell shares to GIC directly? But you will be silly because how else will analysts like us fill pages and pages of data?

DLF builds apartments and commercial buildings and sells them. That’s a “DevCo”.
And it has this entity called DCCDL – a separate entity that it has some stake in – which buys properties from DLF and then rents them out. Because commercial properties like malls and office buildings are usually rented out, not sold, and the rentals are excellent. So, DCCDL is a “RentCo”.
So the promoters of DLF, the KP Singh family, own about 40% of this RentCo. Not directly, but as preference shares that are convertible to about 40% of RentCo. Meaning: they own nothing in Rentco today, but they will if they actually convert these preference shares. Take note of this: it will be useful later. (Note 1)

The KP Singh Family owns 40% of the RentCo business through the preference shares. They will convert the shares to equity, but not all. Only about 33% of the equity will be converted and that will be sold to GIC, Singapore, for Rs. 8900 cr.
That means the KP Singh family gets Rs. 8900 cr. for their stake, valuing DCCDL at a whopping Rs. 30,000 cr.
But remember, the KP Singh family owned 40%, but only 33% is being bought by GIC. What about the rest?
DCCDL will buy-back these preference shares at about Rs. 3000 cr. from the KP Singh family.
How will DCCDL buy it back? Presumably, by issuing debt. DCCDL will take loans to buy back shares from the promoter family. This will increase the debt in DCCDL. (Note 2)
So DLF promoters, the KP Singh family, gets about Rs. 12,000 cr. for their stake in DCCDL – 8,900 cr. from GIC, and 3,000 cr. from the buyback. DLF itself gets nothing. DCCDL takes on debt to buyback the stake.
Why is the DLF stock supposed to be excited then?

DLF Promoters are Kind. They will use the money to buy into DLF.

But Is The Dilution Worth It? Will Earnings Increase?

What will DLF do with the money? They will retire debt. Assuming all of the Rs. 13,000 cr. is used to retire debt, then the debt – currently at 26,000 cr. consolidated, will fall to about Rs. 13,000 cr.
That should impact earnings big time. No? Lower interest payout, higher profits? But:

DLF Loses 33% of Rentco Revenue and Profit, And That’s Huge

However, there’s an important point – see Note 1 above. DLF owns 100% of Rentco today. (The promoters only own preference shares). So all of Rentco revenues and profits are consolidated into DLF today.
But when the convertible shares of Rentco are converted and sold to GIC, DLF will only own 66% of Rentco. And therefore only 66% of Rentco’s revenues, debt and profits belong to DLF – which is significant.
Why? Because Rentco is the branch that DLF has been desperately clinging to for any semblance of profit. Check out the financials – Rentco’s profits are 173% of DLF’s consolidated profits. (Put another way: DLF loses money in every other business)

(Note: we took March 2017 annual results. Jun 2017 quarter was really bad for non-rentco DLF because of RERA and GST. Let’s be kind too.)
Now, assume they own only 66% of RentCo. RentCo’s debt goes up by about 3,000 cr. (to finance the buyback) and their financial costs go up appropriately. And assuming they grow revenues and other costs by 10% each, here’s what the impact to DLF is: Their profits will FALL by 459 cr.
Of course, you say, DLF will have lower interest costs because they pay off Rs. 13,000 cr. of debt! Okay, let’s take that too, into the equation. The impact? Just 21% higher profits (we remove some of the “exceptional” items that bumped up profit this year)

But let’s be even kinder. Let’s assume that DLF Profits DOUBLE. Even then, with the expanded equity base, DLF will earn Rs. 5.78 per share. Even that is a P/E ratio of 31 after this transaction.

There is intense competition in Delhi for residential real estate due to the bankruptcy or failure of two large firms – Amrapali and JP Infra. This brings in more than 30,000 apartments into the market, at distress prices, and increases competition for their core business – the RentCo is nearly at full occupancy and hasn’t been able to see capex coming through.

The End-Deal: DLF is just a bet on Real Estate

DLF has always been a complex situation. The whole promoter ownership thing is mired with corporate governance issues, right from the beginning. Their listing itself went through governance issues – they had delisted earlier and issued the promoters a truckload of new shares without informing smaller remaining investors, who they had to compensate before their IPO. And the current price is like half the IPO price.
If you had sold DLF at its bottom in 2009 at 120, and keep the money at 6% for the next 8 years, your return would still be higher than sticking on with the company.
There’s tons of shenanigans. Taking 100% of Rentco is one shenanigan (they only own 60% really, but they get to use 100% due to the preference share trick). Another is to generate “exceptional” income by selling stake in one set of DLF properties, and buying a stake in another. Finally, they also have a lot of “receivables” and “payables” between DLF entities – earlier the RentCo used to have a massive payable to DLF. Now, apparently DLF has to pay some 1,200 cr. to RentCo. This will complicate their results and any analysis, but the main point is: The business reporting is not what one might call very clean, and so you have to give an “imagination” discount to some of these profits.
SEBI might be a further dampener. They indicted DLF promoters earlier and have filed a case in the Supreme Court to disallow the promoters from selling their shares. A ruling could end up jeopardising the transaction.
In the end, if houses sell DLF makes money unless the promoters decide that they should keep the gains, where suddenly sales happen in entities where they own personal stakes or such. The bet is simply that the real estate market will prosper and that the promoters will be kind enough to share the gains with you.
This might still be a phenomenal stock to buy; like JP Associates was a phenomenal buy at Rs. 10 and went to Rs. 29. But such phenomena are often not sustainable in the light of weak corporate governance and general crash-like situation in their primary market (NCR real estate).

What’s It Gonna Be?

Also think of it another way: DLF’s subsidiary (DCCDL) will take loans of Rs. 3000 cr. for the buyback to pay DLF Promoters, who will invest the money as equity into DLF. Effectively, DLF’s taking a loan to give promoters some money they will use to buy equity into it.
And you might say: So much analysis to say this stock isn’t worth it?
That’s how we are at Capitalmind. If we don’t learn how to find that something thats packaged as a good thing is not a good deal, we might as well buy ULIPs.
We don’t own this stock, and at best might deal with it for short term moves, but the long term story here is simply not strong enough, transaction or not.