Unit Trust of India was an Institution created by an Act of Parliament in 1963. The following year it launched a US-64 “fund” which over time became its flagship fund for investing of money collected from the public into the equity markets. In effect, the first “mutual fund”.
While Bombay Stock Exchange had been in existence for more than 100 years and by then and in addition we had a host of Regional Stock Exchanges there wasn’t an easy way for most investors to research about companies let alone invest.
It was at that kind of time that US-64 was launched and given the government backing, plus a “guaranteed return”, it became a favorite with investors looking for Equity returns. While today we understand that there is not such concept as a free lunch, the investors of US-64 enjoyed a long period of stable growing returns even as markets went through multiple booms and busts.
With a stable re-purchase price and strong dividends over years, Investors had nothing much to fear. But the fallacy of this being generated by market operations were destroyed when in 1998, UTI announced that the reserves of US-64 had turned negative.
Bureaucrats love nothing more than kicking the can down the road. Same was the case with US-64 as well with the government of the day forming a committee while at the same time advising UTI to step up its re-purchase price as well as maintain the dividend pay-out (20%).
To help restore some liquidity and confidence in the scheme, the government took over Rs.2,700 Crore worth of shares of Public Sector Enterprises held by UTI while at the same time forcing promoters (all Government owned) to put in fresh money.
Once bitten, Twice shy is a famous Idiom. For UTI, getting bitten earlier didn’t work – because it wasn’t really bitten. It pumped funds into Infotech Funds during the 2000 Infotech bull rally in the hope that it can close in on the deficit and for a while it worked.
Unfortunately the bubble burst. That put paid to any hopes of a turnaround and the NAV once again dipped way below their repurchase price.  By 2001 with Sensex down 50% from its peak, the old problem once again came to the fore. How do you repay with a guarantee?
This time though, the government decided that it made no sense to let UTI carry on with another round of equity infusion. Instead the company was bifurcated with one part becoming what is now UTI Mutual Fund and another entity named SUUTI  (Specified Undertaking of UTI) where the government took over 11.66 percent stake in Axis Bank, 11.77 percent in ITC and 8.18 percent in L&T which were held by US-64. Investors were made whole.
Those stakes have continued to remain with the government though there has been questions raised as to why the government needs to maintain minority stakes in companies which are professionally managed.
Since all the above companies have no promoters and in case of ITC, the government has taken a stance of not allowing BAT to up its stake beyond what it currently holds, the governments of the day have continued to hold the stake.
We’ve complained of it too: Why doesn’t the government sell its SUUTI stake?

This government seems to have bitten the bullet and via the upcoming Bharat – 22 ETF will be offloading a portion of its holding in the above companies. This will be the second instance where the government has decided to disinvest not by selling shares to the public, which too happens once in a while, but by creating an Exchange Traded Fund.
Disinvestment means the government selling its stake in public sector enterprises to the public. But past instances have been mired in drama – an announcement would push traders to tank the price down (a big seller’s in town!). They went with a follow-on pubic offer – where a high price meant that there were no takers, and the offer needed to be bailed out by LIC, a government owned insurer. Or they do an “offer for sale” with retail discounts, which has given some results but the ticket size is small compared to the disinvestment target of Rs. 72,000 cr.
And then there were ETFs. Exchange Traded Funds are simply mutual funds where you can buy units on the exchange. Package 10 stocks into a mutual fund, list the units on the exchange and sell the basket to investors.
Prior to Bharat-22, the government in 2014 launched the Central Public Sector Enterprises Exchange Traded Fund (CPSE) ETF which consisted of 10 Public Sector Enterprises. Early this year, we saw the Government offer another two tranches to investors, both of which were oversubscribed, and the government raked in Rs. 8500 cr. (for FY16-17).
Returns since Inception for the CPSE ETF is 43.70% versus a return of 54.25% for Nifty Bees (the Exchange Traded Fund that tracks Nifty 50) These are 10 government owned companies that form the ETF, and is very energy heavy. 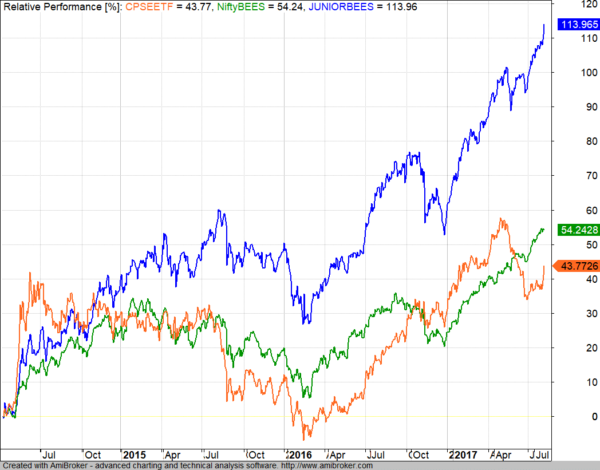 Why PSUs at all? And Why Sell Now?

Public Sector Enterprises were set up in India basically following the model of development of USSR. The prime reason for the government getting into the business of business was waved off with the logic of it being for the greater good.
Over time, Liberalization of the Economy has shown how Private Enterprises can perform better than the Government. In the first NDA government, the government sold majority stakes in a lot of companies to private enterprises through an Auction system. VSNL was sold to the Tatas, for instance, and Hindustan Zinc to the Sterlite group (now Vedanta).
From 2004, the method under which the government sold its stake changed from selling majority ownership to offering the public a small chunk of shares through an Initial / Follow on Public Offer. The advantage for the government was that it was able to raise money while at the same time holding onto the ownership of the company. Also
Selling of shares via Exchange Traded Funds serves the same purpose though here the government can offload shares of a variety of companies in one slice. But what works for government doesn’t necessarily mean it necessarily works for the investors.
The biggest risk with companies being held majorly by Exchange Traded Funds comes from their passivity. Since they are mandated to just track the Index, Passive funds rarely take activist role in the companies they invest. They will be owners, but not participate in key decisions (in any meaningful way).

The new ETF will have 22 stocks. 3 of them are private companies – L&T, ITC and Axis Bank. These will be about 40% of the ETF. The rest are government controlled and managed.
The total value of the holdings in the 3 Private companies held by the Government comes to 49,000 Crores and to sell it completely would need the ETF to raise a sum of 1,23,000 Crores. This isn’t going to happen; a typical sale would, at max, bring in 10,000 cr.
So the government will need to keep selling stake vis this ETF over time.
Lets take a look at the Companies and the Weights this ETF will represent:

And here are the Sector Weights for the ETF: For the investing public, there seems to be no reason to invest in an ETF that holds a bunch of disparate companies with the only common thread being that the government holds a large stake in each one of them. Exposures to Public Sector Enterprises are better driven by ETF’s such as CPSE which are more pure in nature.
The reason ETF’s work as a viable way to invest in markets is due to the fact that Index Selection is done professionally and weak companies are regularly weeded out while introducing better companies as they come to the notice of the market.
While the Bharat 22 ETF will rebalance once a year, the rebalances aren’t going to be based on performance – they will have to include mostly government owned companies. A better and simpler way to get exposure to markets would be to buy a diversified mutual fund or even buy ETF’s such as Nifty Bees or Junior Bees.
In a bull rally, the thought process is to invest first and question later. But every bull market has ended badly. When the government is trying to cash in as much as it can, the question to ask is: is this the beginning of the end, or just the end of the beginning?