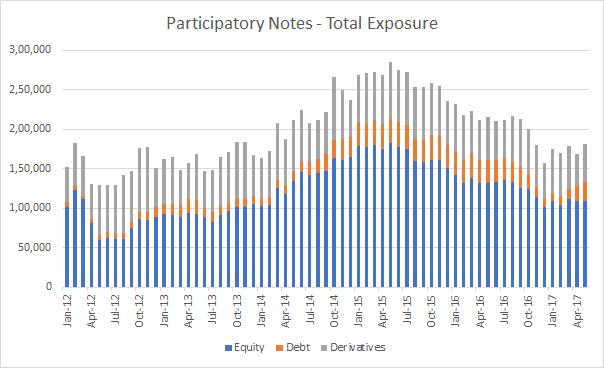 SEBI has banned the use of P-Notes for foreign investors to trade Indian derivatives. To understand what this means, you have to first know what P-Notes are.

Foreign investors can directly invest  in India, if they are institutions or funds. They have to get an FPI (Foreign Portfolio Investor) license, and then trade on Indian exchanges. There’s quite a bit of advanced reporting required for an FPI, and more KYC requirements.
Some choose to not have these registrations. So some FPIs – large banks like Morgan Stanley, Citi or such – will create Participatory Notes for them. Meaning, the FPI will buy a stock, and issue a note against that stock to the buyer. The buyer could be anyone – from a small hedge fund that doesn’t want the hassle of registering with SEBI, to even an individual investor that CANNOT (due to India not allowing foreign individuals to buy Indian stocks in individual names).
The P-Notes, as they are called, are basically back-to-back exposure by the end-user, with the FPI being a go-between. If the stock goes up, the end investor makes the gain. If it goes down, the end investor losers. The FPI just charges a fee for the intermediation.
Such P-Notes can be based on stocks. And on bonds. And on derivatives, like futures and options traded in the Indian stock markets.
P-Notes have one problem according to SEBI: that they could be owned by entities that are somehow “laundering” money or are actually promoter entities in India. While the first point is valid (laundering could be happening), the second one is strange, and SEBI does have the ability to ask who the end-investor is.
Anyhow, this is the fear the market regulator is addressing regularly.

What’s the Ban About?

There are different varieties of P-Note bans. We’ve noted one as long ago as 2007.
Today’s story is about how P-Notes on derivatives will no longer be allowed. SEBI’s regulatory announcement says that P-Notes based on derivatives will no longer be allowed to be issued. And that any existing notes should be unwound either at maturity or by December 2020.
There’s a lot of investments by FPIs in P-Notes. Most of that, though, is in stocks. There’s no change for P-notes in stocks – so they can continue for now.

The issue is with P-Notes in Derivatives, and the NOTIONAL exposure is Rs. 47,000 cr. or so. 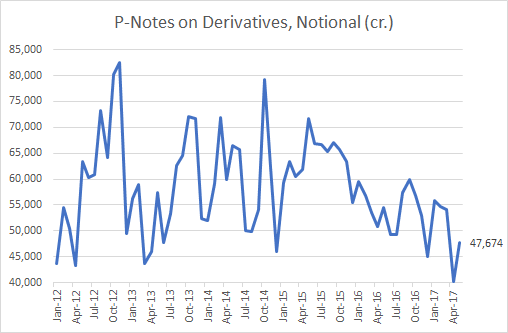 Notional means total exposure. So if I own a 9700 call option and am short a 9800 call option, one lot of each means I have a total exposure of about Rs. 14 lakh. The margin required on such a trade may be less than Rs. 50,000, so there’s a lot of leverage (and the maximum I could lose is likely only Rs. 20,000 or so, due to the difference in premiums).

The Impact: Who Gets Hit?

There are P-Notes issued to people abroad, who want to buy stocks. They don’t get hit. The ban is not for p-notes on debt or equity. Its only for derivatives.
There are P-Notes for arbitrage. Since FPIs can’t get India’s fixed income returns easily (there are restrictions on how much they can invest in Debt) there is a way to get our debt returns by a) buying a stock and b) selling a future at the same time. The cost of carry is close to the risk free interest rate and some gains can be made this way. A P-Note issued against such a trade – a stock and an equivalent short future – is still okay. Why? Because this is a “hedged” trade. You have a stock position and an equivalent short future position, so you can keep buying such P-Notes – SEBI has allowed hedges of this sort.
P-Notes for some option strategies might still work – like covered calls. If you have the stock and sell calls against it, that’s fully hedged again.
There are some P-Notes issued by banks abroad where there is a long term option position. Like a Deutsche bank note may be issued where you get a three year exposure to the Nifty, and all its upside but none of the downside. Such strategies are backed by long term options (typically by buying a call option of three years later).
Such long term notes may continue till 2020 (or until maturity) but no further such notes can be issued.
Also no position gets impacted where the FPI trades directly. That is, if there is an FPI that wants to buy options or futures, they can. They just can’t issue notes against it.
But what will not work is naked long or naked short futures positions. Or some sort of leveraged option trades. Some positions could have been created using futures to build leverage (as you need less margin to trade a future). Other positions could be short term (where futures don’t get impacted by delivery issues with cash trades).  Yet others could be option strategies, like straddles or strangles, or ratio spreads. These will not be allowed for the future and current positions have to be unwound by expiry.
One of the impacted players is

Will This Kill The Market?

In short, no. The 47,000 cr. exposure is notional. Notional means very little. If all the 47,000 cr. exposure was notional in options (versus futures) then it can be unwound easily without any impact – Rs. 47,000 cr. is less than 1/4th of just ONE DAY’s trading volumes in options.
If the exposure is in futures alone, it will take some time to unwind, but much of that position may be as a hedge or an arbitrage, which are both allowed to continue. So, in that sense, we might see very little real unwinding.
Many articles presume that short positions in Infotech, Pharma, Telecom and PSU Banks are held through P-Notes. The answer is more likely that the FPIs that hold such positions have no P-Notes against them – that is, the positions are directly held by the FPI and have no impact of a ban.
The rumours are that P-Note unwinding will result in a huge amount of buying, in the form of short covering, on stocks. To act in advance, punters buy the stocks anyhow, because the eventual short covering will drive them further up. For reasons mentioned above, we believe that this eventual buying is quite unlikely.
Typically, when the word P-Note comes along, we should ignore it. It’s a lot smaller than it used to be. People hardly use P-Notes even for equity – as a percentage of total FPI owned assets, P-Notes on derivatives is less than 2%. (P-Notes for stocks, on the other hand, is 3.8% – more than double the derivatives exposure but still insignificant) There is unlikely to be a large impact of this SEBI move. This is in line with the past, where any news on P-Notes has been a lot of hoo-haa about nothing.