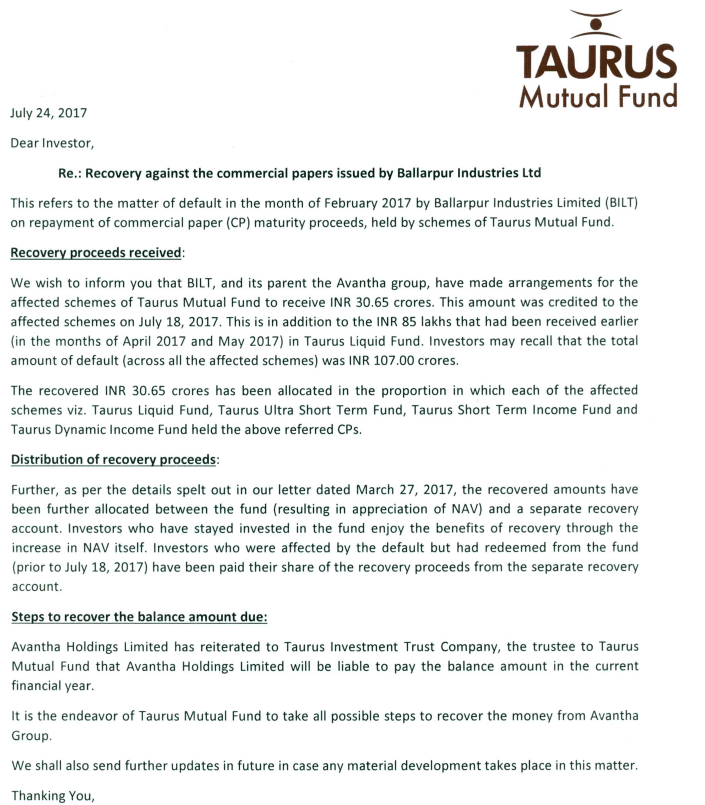 Remember Ballarpur? We know that it made Taurus Mutual Fund a big loss – in many of its debt schemes – when it defaulted on a debt payment. The schemes lost between 7% and 12% on one day, when the fund house didn’t get paid about Rs. 107 cr.
Taurus then decided that no further investors would be allowed into the funds, but you could sell if you wanted.
Now, apparently, we have some reward for Taurus fundholders. The Liquid fund NAV jumped by 2% earlier this month and it seems like some money has come back in.

And then, there’s a letter by Taurus: The main thing is that out of Rs. 107 cr. Ballarpur has “made arrangements” to pay Taurus Rs. 30.65 cr. This money has been allocated to all the affected debt funds (so each one will receive a little bit)
Investors that haven’t sold yet will see their NAV go up, and now can sell to a certain extent (however, they would do better to stay in until the final recovery). If you owned the fund and had sold because the NAV fell, then you will also recive a part of the recovery proceeds (they will distribute to all unitholders on the day of the default, in proportion).
Ballarpur’s promoter, Avantha Holdings (the Thapar group’s private company) has said, apparently, that it’s liable for the rest. We don’t know when that will come.
Ballarpur has just given banks 51% worth shares in the company, at Rs. 15.83 per share. (Read release) This means everyone’s shareholding is diluted. And that banks have to now find a different owner to sell their shares to. And that the banks probably won’t like the fact that Taurus has been paid ahead of them, but the “made arrangements” phrase probably means the money didn’t come from Ballarpur but from the promoter in a separate capacity.
Taurus has seen a large amount of AUM flow outward, and this recovery will redeem it slightly. The problem with Ballarpur remains – and there’s much more than the 100 cr. that’s defaulted to Taurus (debt of over Rs. 7,000 cr. is probably at stake). This resolution is likely to set the tone for recovery from other large business houses in future, for both banks and mutual funds/insurers.