Every year, Forbes comes out with a study of the most valuable brands in the world. Apple has a huge brand value. Brands are Moats but as the Kingfisher Airline episode in India showed, no matter how big a brand, if it doesn’t adapt to the reality, death is inevitable.
Once in a while, a brand becomes a Verb. Xerox, for example, is used as a synonym for photocopying, Google for Search among others. But Apple, the biggest brand, for example, isn’t seen as a verb.
In India, Tata and Airtel are the biggest brands but yet they don’t to signify any product or service. (Tata is seen as Trustworthy but Tata is not used to denote Trust).
Eveready Industries, the company behind Eveready batteries has been synonymous with Batteries. Pen Cells (AA size) are more often asked as Eveready or Pen Cells than AA Cells.
A bigger brand name in a negative way would be its earlier name “Union Carbide India Limited”. (Union Carbide was responsible for the Bhopal Gas tragedy. Eveready effectively bought it from Union Carbide and now owns that plant) Eveready, the global company, was launched in 1905 by The American Ever Ready Company, formerly known as American Electrical Novelty and Manufacturing Company which was started in the US in 1899 by  Conrad Hubert by taking over the patent for tubular hand-held “electric device” (flashlight) from its inventor, David Misell.
In India, the company operated by importing batteries from the United States which were then sold in India. While the Eveready brand name is big in India, it’s not actually held by Eveready Industries but is held by Energizer Holdings, a NYSE listed company.
In November 1994, Union Carbide completed the sale of its Indian unit to McLeod Russel of Calcutta. UCIL was subsequently renamed Eveready Industries India. It’s part of the  Williamson Magor group, run by BM Khaitan. (They also own McLeod Russel and other such companies)
Eveready is the world’s third largest manufacturer of Carbon Zinc batteries and commands a market share of 50% in India. Over time, it has expanded its product range to Flashlights, Lighting and Electrical solutions including LED bulbs where it’s among the top 3 players. It also makes packet Tea (a leftover from the days when the company had Tea business subsequently demerged into McLeod Russel  ) under the brand name of Tez,
For long, Incandescent bulbs were the mainstay of most homes where the power supply was irregular at best.  Starting under the UPA government which came out with DELP (Demand Side Management-based Efficient Lighting Programme) and the current Modi government which has fast-tracked usage of LED by way of UJALA scheme, LED bulbs are making large gains in market share.
Eveready started off in the LED market by selling LED bulbs manufactured in China. With demand picking up, the company established a manufacturing facility in Hyderabad. The LED business clocked nearly Rs 200 crores of revenue with the company targeting sales of 300 Crores by end of the financial year 2018.

Over the last 10 years, financials have been very lumpy with the company registering net loss in 3 of the last 11 years. Sales have continued to grow at an average of 6% per year. 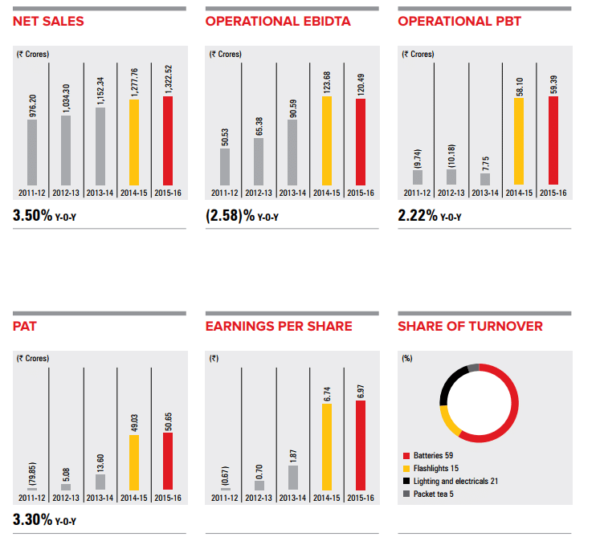 Return on Equity continues to be in single digits. Valuation though has always been pretty high as can be seen in the chart below. 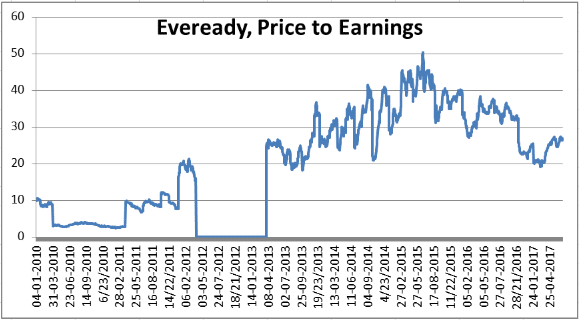 Debt is minimal with the company having an Interest Coverage of 5 times. And finally, we have Momentum on the cards with the stock making new 52 Week Highs. It’s close to an all time high but not quite – and perhaps just waiting to break out? 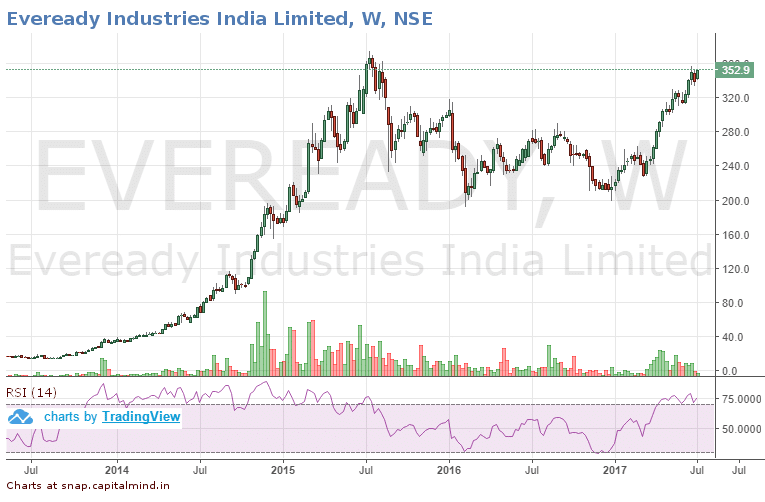 While the stock is interesting given the history and the sector it’s focused on, lack of growth with low-profit growth is a negative. Promoters have also pledged 33% of their shareholding which is another negative.
Overall, while the stock is breaking out, the fundamentals aren’t super exciting. However this is one of those times when fundamentals matter less than market dynamics, so we note it as an outlier in terms of price performance.
Note: This is not a recommendation. This is just a backgrounder into the company as it stands.