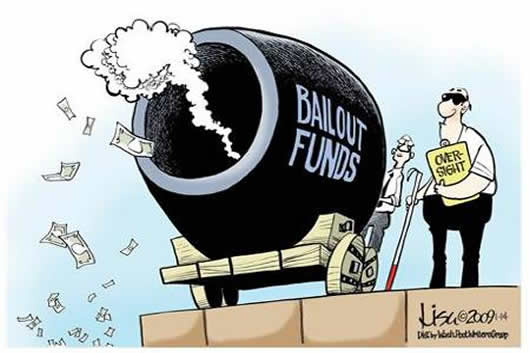 There’s been a suggestion that the Government bail out stressed Telecom companies. This has problems in that come on, you just bailed out farmers, how can you bail out corporates too? But before such things are discussed, a history.

In 1994, India held its first Auction of Telecom Spectrum. Rather than being a single unified license for the total country, the country was divided (more or less based on states with exceptions of Metro’s such as Delhi, Mumbai, Kolkata and Chennai) into 23 circles with each circle getting 2 operators.
It was a real disruption at that point of time. The only operator at that point of time was BSNL (MTNL in Mumbai and Delhi) and the only offering was the landline facility, one that for most people required booking and waiting for a few years. (Imagine, you had to wait in line to get a phone connection)
The first mover advantage of the mobile world, combined with the fascination of being able to carry one’s phone anywhere, gave telecom companies huge pricing power. In the early years, both Incoming and Outgoing calls were charged at heavy prices in the 20’s.
Note: we remember paying Rs. 16 per minute for outgoing calls and Rs. 8 per minute for incoming calls, in 1997.
Over time, more auction of spectrum and introduction of new players have made the whole field ultra-competitive. The cost per call has fallen to an extent that was unimaginable even a few years ago.
Incoming call charges have been mandated to be Zero. Roaming call charges have gone to Zero (Incoming for many operators, Outgoing too for a few) and Reliance Jio, the latest entrant has now made outgoing charges too at zero (subject to a minimum monthly tariff).
Telecom License/Spectrum is needed to be a telco operator. This has to be licensed from the government. And it became a Golden Goose and one that the government quickly understood can be encashed to the max.  A corrupt government milked it for personal use, by changing rules to benefit certain operators. This got busted and is now known as the 2G Spectrum Scam.
The government over time has also squeezed the maximum by auctioning spectrum just a bit lower than what telecom companies require. This meant that companies which required more spectrum to either expand their services or just hold onto what they were holding previously, were forced to bid aggressively lest they need to slow down or worse case shut down their operations.
They didn’t have the money either. So they borrowed from the banks.
While there were dark clouds in terms of the debt which was getting piled on, thanks to growth in subscribers, it was somewhat sustainable.

In 2010, the government auctioned 3G and 4G spectrum where most telecom operators who were operating at that point of time participated. The surprise winner though was Infotel Broadband Services Limited, a company about which little was known. While most operators won in a few circles, Infotel was able to win across all circles.
A couple of weeks post the event, Reliance Industries bought 95% of the company thus gaining a back-entry into the telecom market. Back-entry since if it was known that Reliance was the player behind Infotel, it may or may not have been able to get all the licenses at the price it was able to.
In 2002, Reliance first ventured into communication by offering voice on CDMA platform. Given that players such as Airtel were already established, RCOM came to the market with an unprecedented offer – The Monsoon Hungama Offer allowed customers to get a CDMA mobile phone for a upfront payment of just Rs.500.00.
Since buying out Infotel in 2010, Reliance went about laying the infrastructure required to launch its services across the country. It was finally beta launched in late 2015 with commercial operations starting out in September 2016.
Since then, it has been nothing but havoc for the existing players at the pricing at which it was launched (Beta was literally Free for all). For existing players, it has meant either drop prices to compete with Jio or lose customers.
Small operators like Videocon and Telenor quit the race by selling out to Airtel. Vodafone merged its operations with Idea Communications. Reliance Communications, the original disruptor is on path of bankruptcy unable to pay off its debts. (It’s controlled by Anil Ambani, the younger brother of Mukesh who controls Reliance Jio. The brothers don’t get along.)
The blame for the mess has been laid at the doors of the Government which was aggressive in pricing of spectrum and Reliance Jio which was accused of predatory pricing. The Competition Commission of India recently rejected the predatory pricing accusation.
The first wicket to fall (or one that has already fallen) is likely be Reliance Communications. We wrote about it here. Unlike RCom which has Interest Coverage of JUST 0.33, Bharti Airtel is in much better shape with interest coverage of 1.92 times. Idea at 0.61 is at heavy risk of falling into a debt trap the way RCOM has with no way out.

The way Out: Lower Government Payments

Telecom firms want the easier way out – reduction in various statutory payments such as the spectrum user charge and the interconnect charge will directly reduce their cost of operations. The government will get lower revenue but it also means these companies will be able to get room to survive.
Companies also want a longer schedule for payment of Spectrum Auction fees. Currently, when a telecom company wins Secptrum at an Auction, it has two options

Rest of the money is to be paid over the next 12 years (with a 2 year moratorium) in equal installments. Interest of 9.3% is charged for the remainder.
Companies want the 10 year schedule to be extended to 20 years.
Businesses go down all the time and if any of the telecom firms go down, nothing really changes. Banks may not have enough collateral for their exposure and will suffer. But then again, the business of banking is not one where every loan gets repaid.
The interesting thing is that the promoters of all the above telecom companies are Billionaires. The promoter of Bharti Airtel, Sunil Mittal is India’s 12th Richest according to Forbes. Kumar Mangalam Birla is ranked 9th is the promoter of Idea whereas Anil Ambani, the current promoter of Reliance Communications is 32 on the list.
More importantly, the business is doing very well though margins have seriously contracted owing to large interest payments. Interest as percentage of Operating Profits for Bharti Airtel has moved from 11.30% in 2005 to 23% in 2017. While this is steep, its well under the control and if at any point of time, Airtel decides to divest itself of its African Safari, Debt becomes even more manageable.
To add salt to their wounds, Reliance Jio has advised the inter-ministerial group that is looking into the matter that the current stress is their own making since they have depended too much on Debt versus raising equity. Much of the troubles in other words reduce if new equity was pumped in (Rs1,25,000 Crores according to Jio’s estimates, which one should take with a bag of salt).
Promoters, especially those who aren’t able to afford investing their own money into their firms are averse to getting fresh investors from outside since it reduces their stake and hence in a way the ability to influence the company.
The BSE Telecom Index trades today at around the same level it traded in Jan of 2010. Seven years of Zero return. 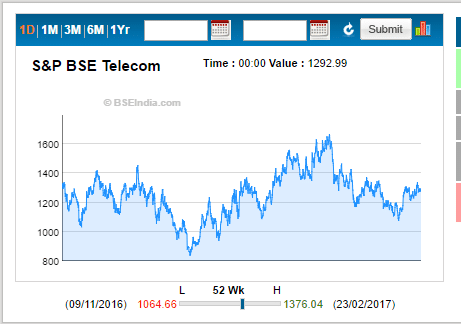 From an investing perspective, Telecom firms are a no-go. Regardless of how the inter-ministerial group (IMG) – set up to look into the financial health of the debt-laden sector will come out, the future looks tough.

But Should We Bail Them Out?

If a bailout involves a spectrum fee that’s spread out over more time, that’s fine, really. If a bailout involves lower other fees, that’s also okay. After all, the lower fees will be better than having to bail out the banks that took such loans.
But we should be wary of generic bailouts. The stress in telecom is good – let the older companies die, and new ones should take their place. There will be a hit taken by banks and investors, but the next set of players will emerge strong. Companies are not farmers – they don’t need to be protected from dying. But given that banks are scared of ever taking a big hit, will a telecom sector death cause another lending standstill in the banking sector?
Something tells us we will know soon enough.

“Only after disaster can we be resurrected. It’s only after you’ve lost everything that you’re free to do anything. Nothing is static, everything is evolving, everything is falling apart.”
― Chuck Palahniuk, Fight Club