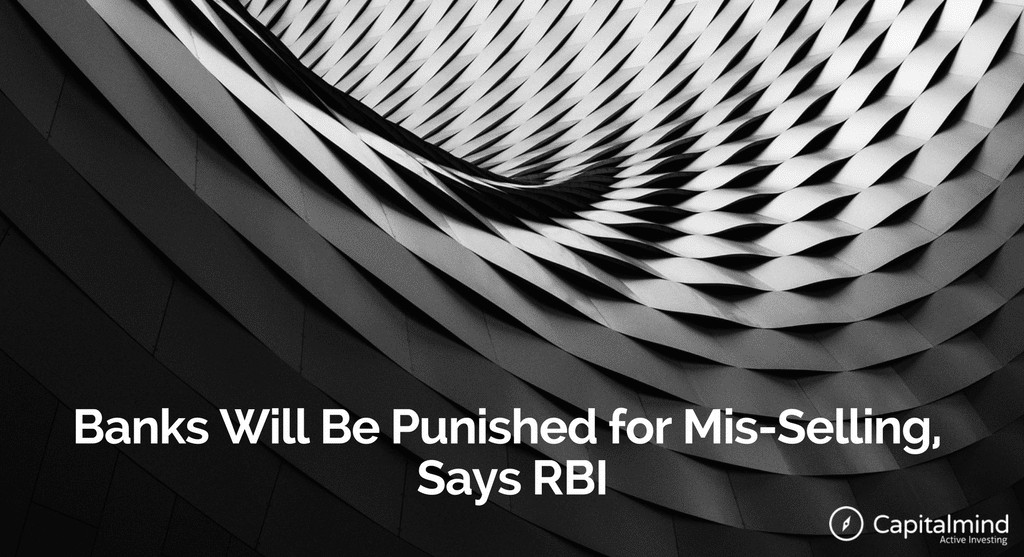 RBI has finally decided to give bank customers a place to complain about mis-selling. The banking ombudsman – an RBI level complaint if you aren’t happy with the bank’s grievance process – has been changed to allow you to complain that banks are selling you things that they aren’t supposed to.
Here’s the notification.

The Reserve Bank of India has widened the scope of its Banking Ombudsman Scheme 2006, to include, inter alia, deficiencies arising out of sale of insurance/ mutual fund/ other third party investment products by banks. Under the amended Scheme, a customer would also be able to lodge a complaint against the bank for its non-adherence to RBI instructions with regard to Mobile Banking/ Electronic Banking services in India.
The pecuniary jurisdiction of the Banking Ombudsman to pass an Award has been increased from existing rupees one million to rupees two million. Compensation not exceeding rupees hundred thousand can also be awarded by the Banking Ombudsman to the complainant for loss of time, expenses incurred as also, harassment and mental anguish suffered by the complainant.
The procedure for complaints settled by agreement under the Scheme has also been revised. Appeal has now been allowed for the complaints closed under Clause 13 (c) of the existing Scheme relating to rejection which was not available earlier.

The relevant part of the new Ombudsman process is to stop you from the following:

How Does This Work?

Banks routinely sell insurance to customers. Many times, such customers are not aware of the product they are buying or whether it’s suitable for them. The bank employees should make checks to see if such products are right – for instance, selling insurance products with regular premiums, to a retired 65 year old person, is plain mis-selling. Non disclosure of commissions, or of product features, or even of the fact that you can complain against mis-selling, is not allowed!
If you have been “conned” by a bank employee in buying insurance or a mutual fund, you will want to complain to the bank first. (There’s a “grievance officer” for this purpose, links on the bank web site)
Then, if they don’t give you a reply you agree with, within 30 days, you can then go to the RBI Ombudsman. (Click here)
You can submit a form, and the new clause above allows you to tell them that you’ve been mis-sold a product.
The good thing is: if this process scares you because it takes time, the Ombudsman can actually charge a penalty to the bank if it finds them guilty, and you’ll get paid for the time as well. Typically an ombudsman ruling requires follow-up, but at least now the process is available to you for being mis-sold products as well.
This is a negative for banks of course, because any such law hurts their bottomlines. It’s probably negative for insurance companies. Mutual funds might escape, somewhat, because banks are not as interested in selling them as they used to be. However, we should wait for strong rulings to see if the change in the scheme will be implemented as we expect. Let’s hope that bank mis-selling will be a way of the past.