On Tuesday, a day when markets went down by 1%, J.P.Associates shot up by more than 10% on news about restructuring of the company’s debt. On Wednesday, the stock once again shot up by 13% making a new 52 week high in the process.
This move is on back of sale (finally!) for transfer of its Cement Assets to Ultratech for a total enterprise value of 16,659 Crores. Enterprise value includes debt. They are transferring 14,000 cr. of debt. So they only get about 2700 cr. for the assets in terms of actual cash.
This sale would reduce JPA’s debt by 14,000 cr. which is about half the standalone entity’s borrowing. However, it will still have  a lot of debt (and very few productive assets) on its table thanks to loans by its subsidiary companies (including JP Power). 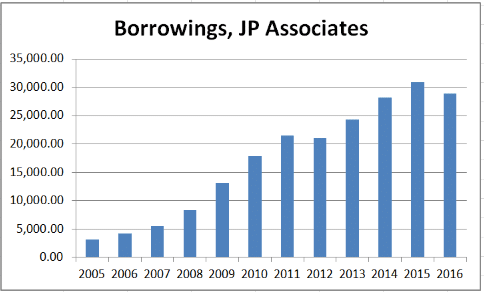 To its credit, the company for long has been trying to reduce the burden by selling off assets. But the more it sells, lesser the ability to service existing loans.
In January 2015, UltraTech Cement had tried to acquire two Madhya Pradesh based cement plants from JPA for Rs.5400.00 Crore .
This was supposed to be a precursor to shed assets over time and reduce the debt burden. But the deal didn’t see the light of the day as the Court Approval did not come. This was due to confusion about transferring of mining license under the MMDR Act – you couldn’t transfer a mining license under the auction rules (they had to be re-auctioned) and the MMRDA act was supposed to be amended. (The act was amended in 2017)
With each passing quarter, financials for JP Associates shifted from bad to worse. In February of 2016, it signed another definitive agreement with Ultra-tech, only this time around, the assets to be sold were a lot more than just two.
While this deal was in progression, the company has also sold 74% of the company’s equity (26% is held by SAIL) in Bhilai Cement to Orient Cement Ltd (a CK Birla co) in an All Cash Deal for a sum of Rs.1,450 Crores.

The Rise and Fall of JPA

The story about the rise and fall of Long Term Capital Management is well known. What is less known is while they lost a ton of money in Swaps (Where they had expertise), they also lost 2 Billion (which more or less bankrupted the firm) in strategies related directly to equities.
The team at LTCM came to the fore thanks to their expertise in Bond Markets but lost their mojo and entire investment when they ventured too far outside their area of expertise.
JP Associates has a similar history. Founded in 1978, it for a very long period of time was mostly a Cement company with a few hotels. In 2008, the company started going big time into Construction of Roads.
While JP Associates has never been shy or borrowing for growth, this took an entire new shape starting 2007. Borrowings which stood at 5000 Crore at end of March 2007 shot up to 30,000 Crore by end of March 2015.
JP Power, a subsidiary company which listed on the markets 2005 and is the holding company of its Energy assets has been under stress as well. In September 2015, it sold two Hydropower projects it owned and operated to JSW Energy reducing its debt burden by 9,000 Crores. Yet, the company is nowhere on the road to health.
In an attempt to reduce the burden, in February 2017, Banks have converted 3,058 Crore of Debt to Equity of JP Power giving them a 51% stake in JP Power, at Rs. 10 per share. (The price now is Rs. 5.7 per share which means banks have lost nearly half their money on the equity portion too).
With the productive assets gone, all it has been left with are projects that are still under implantation save for Bina Power Supply Limited which isn’t operating and was close to being sold to JSW Energy.
Banks are now in talks to split the company into three parts. Part One is the cement piece: but majority of its Cement Assets are being transferred to Ultratech.
Part Two is to form a special purpose vehicle is to be created to hold all its land holdings which is supposed to be valued at around 13K Crore. Over time, the debt will be reduced by selling off these assets. The value of 13K crore is ephemeral because much of it isn’t constructed yet, and real estate is in the doldrums. Real estate needs to return over 10% a year to just make up for the interest cost of holding these assets.
The other remaining assets which include Cement holdings in Andhra Pradesh, Karnataka, Uttar Pradesh and Uttar Pradesh with capacity of 10.6 MTPA, their Hotel Properties, Power Plants and the Sports Complex (Formula 1 track) will be consolidated into a new firm.
Selling off part of their Cement assets will reduce the debt burden of the company. Banks can now reclaim part of their provisioned loans since Ultratech is a debtor in good standing.
The special vehicle will hold assets that will be sold off in time, this is unlikely to generate any great returns for the shareholder. On the other hand, if the company is able to dispose off the assets,  it will reduce the burden of the banks as it recovers its investments over time.
The third part and the one which shall be the key entity (if the move goes ahead) will be the key piece of the Jigsaw Puzzle. This will hold assets that contribute to revenue and hence able to not just service the loans but generate the money required for future growth.

On June 15th 2017, the Company received approval from its Bond Holders holding USD 150,000,000 5.75% Convertible Bonds which were due in 2017 to convert it to USD38,640,000 5.75% Convertible Bonds due 2021 and USD81,696,000 4.76% Bonds that will be due in 2020. While this is basically kicking the can to the future, it provides a helpline to the company as it tries to ward of total bankruptcy.
In 2012, JP Associates had launched a $150 Million FCCB with the money going into pay for a earlier FCCB issue that was due for redemption. This FCCB issue was sold at a conversion price of 77.50. With price of the stock being nowhere near, FCCB holders who have been paid any interest are among those in the line for repayment.

The problem: Paying Back The Remaining Debt, Through Dilution?

Around 13,000 cr. of debt remains. Assuming banks want to “write down” any portion, they will have to convert to equity. In all likelihood, they might have to take out Rs. 3,000 to Rs. 5,000 cr. of debt. At the current valuation of about Rs. 5,000 cr. this is another 100% dilution for current shareholders. While that reduces the debt somewhat, it still has little or no income left to service the debt – so they have to sell assets and pay back what’s left of the debt. (Rs. 8000-10000 cr.)
That doesn’t help – because if you’re selling assets, you have even lesser income left to service the equity. If in the end they sell everything and are left with even 5,000 cr. that will mean a market price of HALF the current price – because banks would have diluted you substantially.
Shareholders or at least Speculators seem to be delighted with the turn of events with the stock doubling in span of a month. This is despite the fact that talk of the trifurcation being still in the air with nothing yet confirmed.
In 2012, talk of the company raising funds by selling off, what else but its cement plants had pushed its stock price which doubled during the year.
Indian Infrastructure firms have in the past Bitten off more than what they could chew. With litigation / slow progress in terms of bureaucracy and most importantly expensive funding, its hurting anyone who leveraged beyond their abilities.
When the dust settles, some firms will be better placed then other, but given the path and the problems JP Associates, it’s doubtful whether this could one such company. And the spectre of dilution and bank-ownership leaves the ship too battered to be sea-worthy.