The history of a set of stocks to represent the market started with Charles Dow who created the first stock market Index. An Index is a representative of the market as a whole and hence the selection is generally based on factors such as size and liquidity.
Index provides a benchmark to measure performance against. Mutual funds for instance create portfolios that track markets with active involvement of the fund manager. But which fund is good and which isn’t cannot be explained without   that is more static and can be compared against.
Over time, new instruments have been created that mimic the Index rather than try to beat it. We know that by the name of “Exchange Traded Funds”.

How do Indices get calculated?

A stock Index consists of a select number of stocks that are representative both of the Industry and the Sector to which it belongs and are generally the biggest ones around.
Nifty 50 consists of 51 stocks while Sensex consists of 30 Stocks. Dow Jones is a 30 stock Index while S&P 500 is a 505 stock Index.
Indexes are calculated either on Price (Dow / Nikkei being the 2 big ones) or on Market Capitalization (literally 95% of the Indices across the world). Indian Indices use the Free Float Market Capitalization for calculation of the Index weight.
Market Capitalization is calculated by multiplying the total number of issued shares by the stock price. In case of Free Float, the calculation is done by multiplying only those shares that are held by the public (non-promoters).
When a company that is part of the Index gives out a Bonus or Splits its shares, the same gets adjusted so as to normalize the Index. This is the case when companies give out a very high dividend (i.e. over 10% of the market price). But normal dividends aren’t adjusted in the same way.
Dividends are paid to shareholders from its earnings. Indices which are nothing more than model portfolio’s hold no shares and hence ignore these dividends.
Most of the time, Dividends aren’t big and yet over time they do add up to a tidy sum.
Here is the historical chart of Nifty Dividend Yield over time. 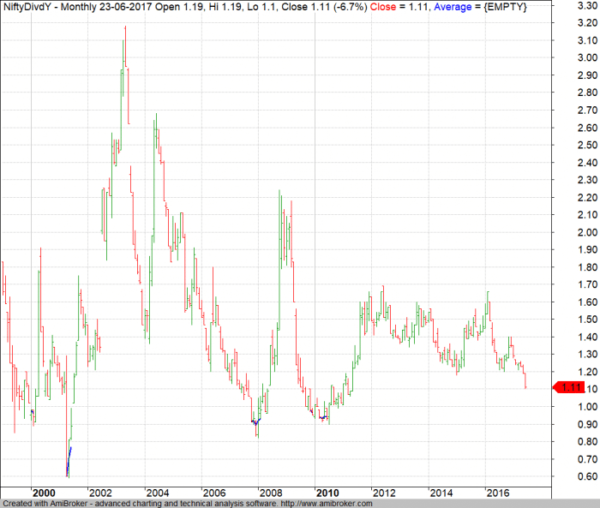 The Differential:
A dividend yield of a Percent or two should barely make any difference over the long term, Right?
Wrong. While the differential is small, the act of compounding can make it pretty big over time and ignoring it will lead to misleading results.
The current value of Dow Jones is 21,400 but if one were to assume Dividends were re-invested Dow Jones would be at 45,600. Similarly while Nifty is currently at 9600, Nifty Total Returns stands at 13000
Here are the historical return comparison between Nifty 50 and Nifty Total Returns

Mutual funds use the Index as a benchmark. This is a bad choice since growth funds re-invest the dividends while the Index doesn’t.
Here is a chart comparing returns of Nifty 50 with Nifty Total Return Index. The gap keeps widening. 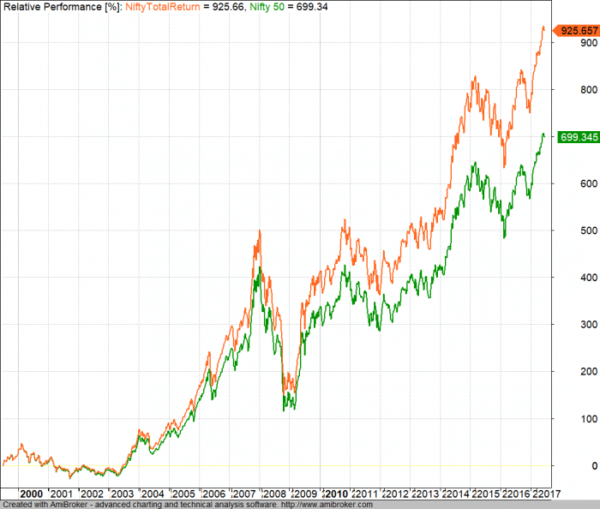 But the lower returns of the regular Index makes more funds seem like Geniuses even when they aren’t.  Of the 48 Large Cap funds with a 10 year track record, 79% beat Nifty returns but only 60% beat Nifty TRI. Do note that this despite the difference in returns being just 1 odd percent.
The problem with using Nifty TRI as a Benchmark is faulty in the face of the fact that most funds don’t stick to either Nifty 50 as either a Benchmark or have a portfolio largely made up of Nifty 50 stocks.
What then, would be a better way to judge funds or even one’s own Portfolio?
For a long time, NSE provided only Total Returns of Nifty 50. Recently though it has broadened the horizon by providing Total Returns for a whole lot of Indices. Can we conjure up something that can be easily replicated in the real world and one which can be a better judge of performance?
More of that in the Next Post…Catch you there