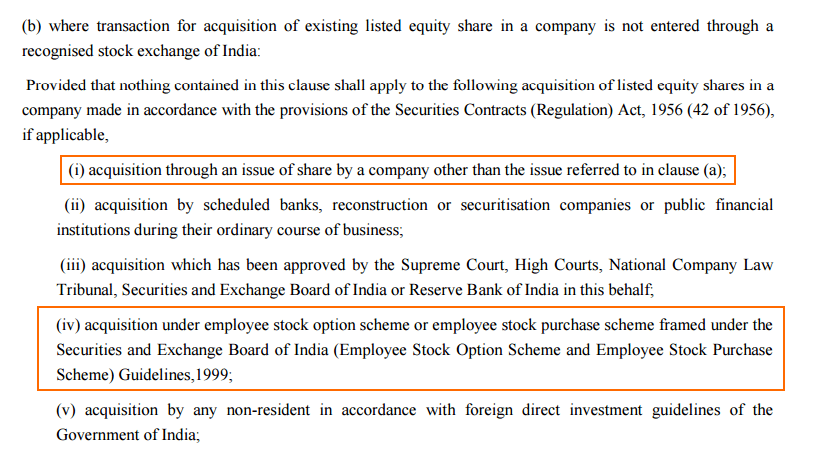 And it’s here. The notification from the Income Tax Department that clarifies that certain kinds of stock purchases don’t get hit by Capital Gains Taxes.
But first, a history: Read this post to see what happened. Finance Minister Jaitley said that if you bought your shares after 2004 but didn’t pay STT on the purchase, then you get hit by Long Term Capital Gains Tax if you sell them now. (having held for more than a year)
But they said there would later be a notification to allow “legal” purchases, like Bonus Shares, to not have to pay such a tax.
That notification is here. (Read)

What Does It Say?

The notification says that certain kinds of shares, even if acquired without STT, will not have to pay long term capital gains tax.
The part (b) of the notification is important:

So any acquisition of shares will get hit. But Bonus Shares are fine. Why? Because tehy are an “issue of share by a company”. Meaning that the company itself issued these shares. It wasn’t bought from someone else.
Meaning: Splits and Rights issues, along with Bonus Shares, won’t have to pay long term capital gains tax.
Also the second one highlighted above is of ESOPs. ESOPs are where an ESOP pool is created (perhaps as a trust) and shares granted to employees, who buy them without paying STT. They also don’t have to pay such a tax.
Finally, there’s a part (c) as well, which covers if you receive shares as a gift or inheritance. Gifts from close family are non taxable as is inheritance. But this rule would have taxed them; fortunately, with this notification, no tax!

Who Pays Such Tax Then?

If you get a preferential offer from a company – and many do this – and buy shares directly, then you get hit with a tax when you exit. Such means were used to first sell shares as preferential issues to known HNIs, then rig up the remaining shares to a very high point, and then sell at a big profit.
Also there are instances where a company is delisted. Then shares are sold to some people. Then the company is re-listed. And this notification therefore taxes people who bought it while it was unlisted.
If you’re not any one of the above, you don’t have reason to worry. The point was to keep bonus and other types of “legal” transfers, where this is no STT, out of the ambit of the Budget rule. And with this notification, a good portion of concerns are behind us.
Update: Some questions have come about after this post. Here’s the answers.
Are ESOPs in private companies exempt? No. ESOPs in companies that aren’t listed in India are treated the same way as before (added to income for short term, 20% tax on indexed gains for long term).
How does this work for demergers? Demergers are fine if pre-demerger, shares weren’t acquired through a private preferential issue.
What about buys by venture funds or PE Funds? Registered VC funds or AIFs or banks that purchase equity from the company are ok – they are exempt too.