Yes Bank has been in the news for all the wrong reasons recently. There’s been about 5.5 times more “bad” loans according to RBI, versus what they revealed last year.
(Note: We have changed the heading after the Yes Bank Clarification received, noted below)
Let’s look first into what the RBI notification says.

What Does The RBI Notification Say?

The RBI notification which was released on 18th April makes it clear that the RBI is peeved at banks’ lack of proper NPA recognition. According to the notification:

Read our detailed post on this.
Yes bank had already been hit in their quarterly results with NPAs doubling in the last quarter, due to their having take provisions for an account (probably JP Associates) where they think recovery happens in the near term. But things, with their annual report, have gotten worse.

Note :The above screen shot is taken from page 267 of Yes Bank FY17 Annual report.
And Net NPAs show a deviation of astounding 1166%. The Net NPA % disclosed by Yes Bank was at 0.29% for Mar 2016, which according to RBI should have been 3.67%.
The consolidated EPS disclosed by banks stood at Rs 60.38 for FY16. If the NPAs had been identified according to RBI and necessary provisioning done the EPS would have fallen to Rs 47.04. That’s a fall in profit by 20% or more.
And remember RBI does the NPA identification once a year. And the above said data is for the FY16. RBI hasn’t even done their NPA review for FY17 (that’s the year that just went by). When they do that, they are likely to find another set of discrepancies and this will come in next year’s annual report.

Aside: Why Do Banks Report Lower NPAs?

The idea of NPAs is: You have loans that are at least 3 months overdue. You report the “gross” loan amount, including uncollected interest till the time it becomes NPA, as a bad loan. This is a Gross NPA. Then you take a provision on it, saying I’ll block out 15% of the loan as a potential under-recovery, and show the rest as a “Net NPA”.
This blocking out provisions hits bank capital and reduces their profits. Banks also think – look, there is this company which has defaulted to others but not to me, so I don’t care to show it as an NPA. Or, that I have collateral to cover the loan – why should I take a 15% hit? RBI doesn’t agree, and RBI will ask the bank to take these as gross NPAs. That’s where a bank and RBI will differ.

The Clarification Which Doesn’t Clarify, and Is a Lie?

Post all the hullabaloo, Yes Bank comes with a clarification. And it still doesnt address the massive divergence issue.
Yes Bank effectively agrees that they did report lower NPAs than RBI’s audit discovered. Just that the massive number (4800+ cr.) has now fallen because they’ve either recovered some loans, or sold them to ARCs or such.
The clarification also states that the new overall gross NPAs for March 31, 2017 stand at Rs 1039.9 Cr. This clarification came on 12th May 2017.

Note: Above is the YEs Banks Clarification, disclosed in its Annual report and also on BSE
But this 1039 cr. number is plain wrong. The results which were disclosed on 19th April 2017 (Just 23 days prior to clarification) has stated gross NPAs at 2018.56 Cr.

Note: * indicates the values are for consolidated. All the values are in lakhs.
As you can see, there is no 1039 cr. number there. Even the Net NPA is 1072 cr. which is a higher number. How can a bank state a clarification with a wrong current NPA number?

It Gets Worse: Why wasn’t the JP Associates NPA revealed in December?

Yes bank has gone around saying that there is this 911 cr. account which is NPA but will be removed soon from NPA. Presumably, this is the JP Associates’ cement plant exposure which is being sold to Ultratech. 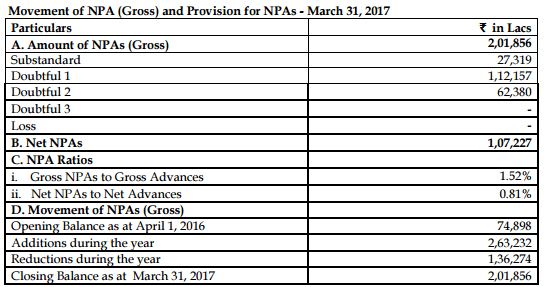 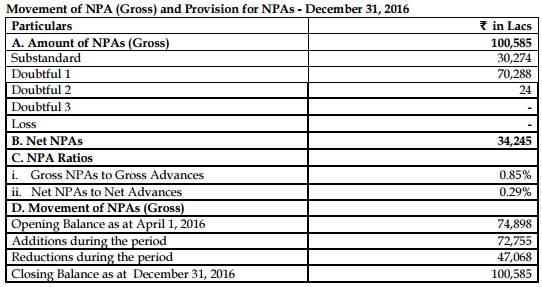 What Next: PCR Decline and More Provisioning?

Yes Bank may state that there is no impact to the current results, all of this might change after the RBI survey later this year.
Current provision coverage ratio stands at 46.88% (last year it was at 62.02%). This might decline if it incorporates the NPAs identified by RBI. It might require some serious provisioning – and thus will hurt their capital.

Yes bank was one of the few banks which was in pink of its loan book. Consistent upward valuation has pushed the stock to new highs of Rs 1640 Levels. The stock has almost doubled from Rs 680 levels since April 1st 2016 until last week. 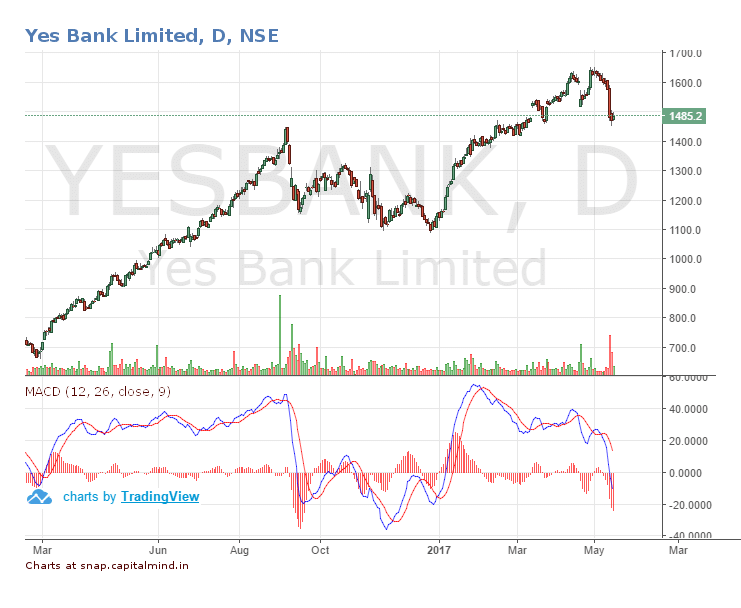 There’s something wrong here. The RBI should note that the 1039 cr. NPA figure is totally uncorrelated with the official NPA figures released earlier. Also the missing 911 cr. from earlier NPA reporting is also surprising.
Capitalmind has no position on Yes Bank. None of the authors hold it. ]We would like this murkiness to end! But will it? Or will they have to manufacture more “alternate truths”?

Yes Bank has clarified its stand as follows, by email to us.

The bank has already considered the findings of the RBI’s AQR in Dec 2015, and also of the annual Risk Based Survey (RBS) in Feb-March 2016. The divergence identified as outcome of the AQR & RBS were fully provided for and included in the credit cost for the same year (FY16); There was No carry over from the same.The credit cost for FY16 was restricted to 50 bps vis-a-vis the original management credit cost guidance of 60-80 bps.

Subsequently, the RBI’s RBS was conducted in 2016-17 as well, and the divergences consequent to this were also fully accounted for in the credit cost for the year (FY17) with No carry over to FY17-18. The credit cost for FY17 was 53 bps vis-a-vis the original management credit cost guidance of 50-70 bps

Capitalmind: This post has nothing to do with the AQR (Asset Quality Review).  Essentially what Yesbank is saying that the RBI notes in their AQR were fully accomodated at that time. We have no comment on credit costs as that is not mentioned in this post.

The Asset Quality Divergences for FY16 as disclosed in the Annual Report were finalized only in April 2017 and in conformity with the RBI Circular dated April 18, 2017, ‘Disclosure in the Notes to Accounts to the Financial Statements – Divergence in Asset Classification and Provisioning’.. These  have been accordingly disclosed and financial impact was absorbed in our Annual Audited Financial Statement (on April 19, 2017) (board meeting within less than 24 hours of new disclosures requirements announced on April 18, 2017)

YES BANK reiterates that the disclosure on divergence in asset classification and provisions in NPAs in the Annual Audited Financial Statement is in conformity with the RBI circular. The reported divergence was for the prior period ended FY 15-16.  Therefore there is no case of ‘under-reporting’ or ‘hiding NPAs’

Capitalmind: While the disclosure requirements came in on April 18, the actual NPA requirement would have been communicated much earlier to Yes bank. The point is: they didn’t disclose that RBI had found 4800 cr. + NPAs in the April 19 results or conference call.  Which is 5.5x higher, and information worth disclosing.

They only said they have addressed the “divergences” without mentioning the quantum of them, and the quantum came later in the Annual Report. It does seem like under-reporting or hiding NPAs if they knew that the RBI NPA number was greater, and that they didn’t reveal the RBI NPA number and instead just their own number on April 19.

In general, we should not believe the bank’s NPA number of 1039 cr. either until it is audited by RBI, and therefore our opinion on this is that whether they were underreporting or not will be known after an RBI audit of the new number.

Additionally on the point in your article regarding gross NPA outstanding at INR 1039.9 crore. Please note that this outstanding is from the Divergence of GNPA as disclosed in our AR, which also includes one borrower with an exposure of INR 911.5 Crores (88%) which is expected to be recovered in near term.

Capitalmind: The press release spoke of the Gross NPA falling on March 31, 2017 down to 1039 cr. . It uses the term “overall gross NPA outstanding”.

There will be another counter-RBI number later when they do another audit for this year. So let’s just say that these numbers from the bank are one thing, but that RBI’s numbers seem to be much higher.

Regarding the article’s question on ‘why wasn’t NPA revealed in December’.  I would like to draw your attention to the fact that the INR 911.5 crore account was part of the Divergences finalized by the RBI only in April 2017 ( as stated above). Accordingly, this has been classified and disclosed in our Annual Financial Statements and the Basel III Disclosures in April. Since the finalization was only in April, 2017, this would obviously not reflect in the December 31, 2016 disclosures.

Capitalmind View: According to Yes Bank, they received note of the RBI divergences only in April 2017, which is why the NPAs weren’t revealed in December, because RBI hadn’t even told them these should be NPAs. The question still remains about why some NPAs should be classified differently according to RBI, but our phone conversation revealed two things:

This explanation is useful to have. In general this would be ok if the divergence was like 10%. But at 550% you have to stop and ask a few questions.

We believe it would have been better if the bank had noted the specific information in their April 19 press release and results – stating that RBI had found 4800+ cr. of Gross NPAs, but they had addressed it down to 1039 cr. and so on. Why wait till people find this info in the annual report and question them about it?

In the spirit of fair disclosure, this information should have been made available at the time it was known to them (April 2017, during their results press conference) rather than now, after their annual report is out.

Note: We are changing the headline. The story remains as is and carries the Yes Bank Clarification above.