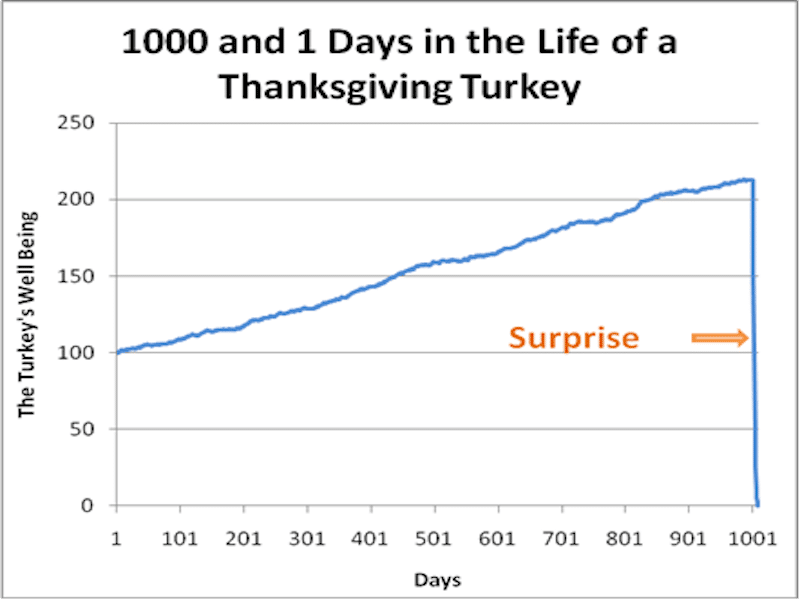 We often hear long winded stories from people in the financial industry about how we should not compare two things with different “risk”. So don’t compare a mid-cap fund with a large-cap fund. Don’t compare a fixed deposit with a debt mutual fund. Don’t compare equity with derivatives. And so on.
This, to me, is the kind of bullshit that we as a financial industry have been feeding people all this time. This is unnecessary jargon, and designed to confuse people.
And it’s time to call it that.
People don’t get this “different risk” bullshit. If a midcap mutual fund made more money, then they want to be in that midcap mutual fund. Because that large cap mutual fund you say is “less risk”? There are equal or more chances of losing money in that too, and perhaps even more likelihood of doing so. So you’re telling people they are likely to lose money, just that it’s probably a little less money unless of course a Satyam happens, or a US FDA hits, or a big investor decides to exit, in which case they lose MORE money and for heaven’s sake just stop now.
To most people, there are only two types of risk in buying stuff as an investment.

Yeah, some caveats apply. But the 2) part is like a fixed deposit. You typically will not lose money. You might lose if for instance the bank goes down and the RBI doesn’t have money to make the insurance or if you’ve invested more than Rs. 100,000. But that is not a useful metric to worry your ass off. So, you cannot lose money.
Then the first is where you can lose money. Once you decide you can lose money, we can bicker about how much money you can lose, but since I cannot guarantee that you won’t lose more than X, it will always remain “risky” in your head.

Can we change the paradigm?

As you can see, it’s a losing battle when you start to do bullshit like this. It looks intelligent. It feels intelligent. Of course you can’t compare two properties that had different floor tiles. But you can, no? You know you can. You can feel the comparison obviousness coursing through your veins. You can be dead sure that if I say I made 2x in property A, you will ask how much I made in property B because that’s your benchmark of comparison. Floor tiles or not.
You know real estate has risk. Relatively how much between two properties, you don’t care. Now you want to know how much return. Period.
(Unless you are sophisticated RE diversified portfolio investor type which you are most likely not, so let’s just stop pretending and move on.)

The New Idea: Just Show Me The Risk and Return

Let’s just understand one thing – people know that there is a risk of losing capital. So we should see what your returns are, and whether the risk is asinine.
Everyone knows what risk-free returns are. So a fixed deposit is like 6% to 7% today. You might get 8% if you tried hard enough.
Anything that’s risky had better do more. So you compare the risky stuff based on the return. And you’ll add some element of understanding of the elements that you hate – that is, how likely is it that I lose all my money?
Here’s the stuff to look for. Not AAA or crap like that. But real, representative statements that immediately tell you how insane some financial product is.

There’s a famous statement by Taleb about turkeys. You fatten them up until that one day when they’re converted to dinner. While they’re being fattened up, the trend is all up. It will continue to look up, from the angle of being the turkey, until one day when then worst thing to be is the turkey.

(Source)
In investing terms, a high turkey risk is when you might earn every month but you have a very high likelihood of getting chopped to zero. MLM schemes are one such turkey-risk. Then you have the unknown chit-funds, where you think you get a great return but in general, there is the risk that it was just a ponzi scheme.
Many low-grade bonds are that way. The whole subprime crisis was a big turkey risk. In India, public sector banks are inherently a choice between turkey risk and the belief that oh, the government won’t let them fall.
Turkey risk happens in chasing penny stocks too. Or in “shady” real estate, where the papers aren’t clear. You need to know about this risk – anything that’s “high” is an avoid. Unless you are super knowledgeable about this area, and have the ability to change things.

Financial products that have a lot of jargon are high on the sucker-risk-meter. Meaning, you are likely to be suckered because there’s shit you don’t understand. ULIPs are like this. In fact, more insurance policies that are sold as investment products are like this.
There’s also many complex products that are sold to high networth investors. If the Nifty goes to X, I will give you 1.5X but if it goes down to Y, you lose 0.5Y and so on.

Stuff you don’t understand but sounds intelligent is always designed to con you.
So the higher the sucker-risk of a product, the more detail you need in order to evaluate it. So you either find the time, or you avoid it completely.

If you take a time when the markets are going up big time, then there’s no point trying to evaluate performance. Everyone and everything performs.
One good test is Capitalmind’s Magic Portfolio.  Read the post and click on the google sheet. Keep clicking the refresh button and see if your randomly generated stock portfolio keeps beating the index.
If it does, you are in a high-idiot-risk Market.
Meaning, anything has made money. Even random darts thrown at a paper full of stocks made more than the index.
At such times, you want to practice the art of smiling and nodding and raising eyebrows a lot, because people will tell you about phenomenal performance and make you believe it’s their skills. In the idiot-risk-market world, the highest risk is when people who have no idea what stocks are, are telling you what stocks to buy.
This happens every couple decades or so in Real estate. But we all know that. You can never lose money in real estate! I bought a property in 2007 that was laying eggs by 2012 and today I have a farmhouse…(please practice raising those eyebrows and smiling).

And There’s Nothing More

Seriously. Just stop. You don’t want to know if small cap is more risky than large cap. You really don’t want to know. Because there is no correct answer. And if there is no correct answer we will be discussing averages. The average small cap is riskier than the average large cap.
Like that makes a difference.
No one is average. No one even wants to be average.
If you’re even making the attempt, there is a bloody good chance you want to be above average.
If you are, then it’s stupid to tell you that some average something is worse than the average something else. If I told you the average fifth floor apartment sold for less than the average fourth floor apartment, does that make you buy only fifth floor apartments? Come on.
If you wanted average, you could just buy a little bit of everything. That way you won’t be worse than the average. There are ways to do that. Just buy an index or a consistently performing mutual fund. Just buy a house in a property by a big developer.
But because you don’t, you want to aim for something better. And to do so, you have to ask yourself before you invest: Are you in a high idiot risk market? Is this product looking like it’s for suckers? Is there turkey risk?
Note: I hate to say this, but Capitalmind isn’t guilt-free either. While we try to make things simple, we end up making stuff more complex than it deserves to be. WPI this, and IIP that, and in the end, the stock market has gone up so who cares.
You do, in general, want a high return when you take risk. The degree of risk usually doesn’t matter to you unless it makes you uncomfortable. We wish financial products were labelled such that they highlight what should make you uncomfortable; the rest is risk and in the broad game of life, we all know when we are risk-takers, and when we are not.
So freely compare products where the “discomfort” of the risk, to you, is the same. Everything else is jargon. Meanwhile, practice those smiles, this market says you’ll need them.