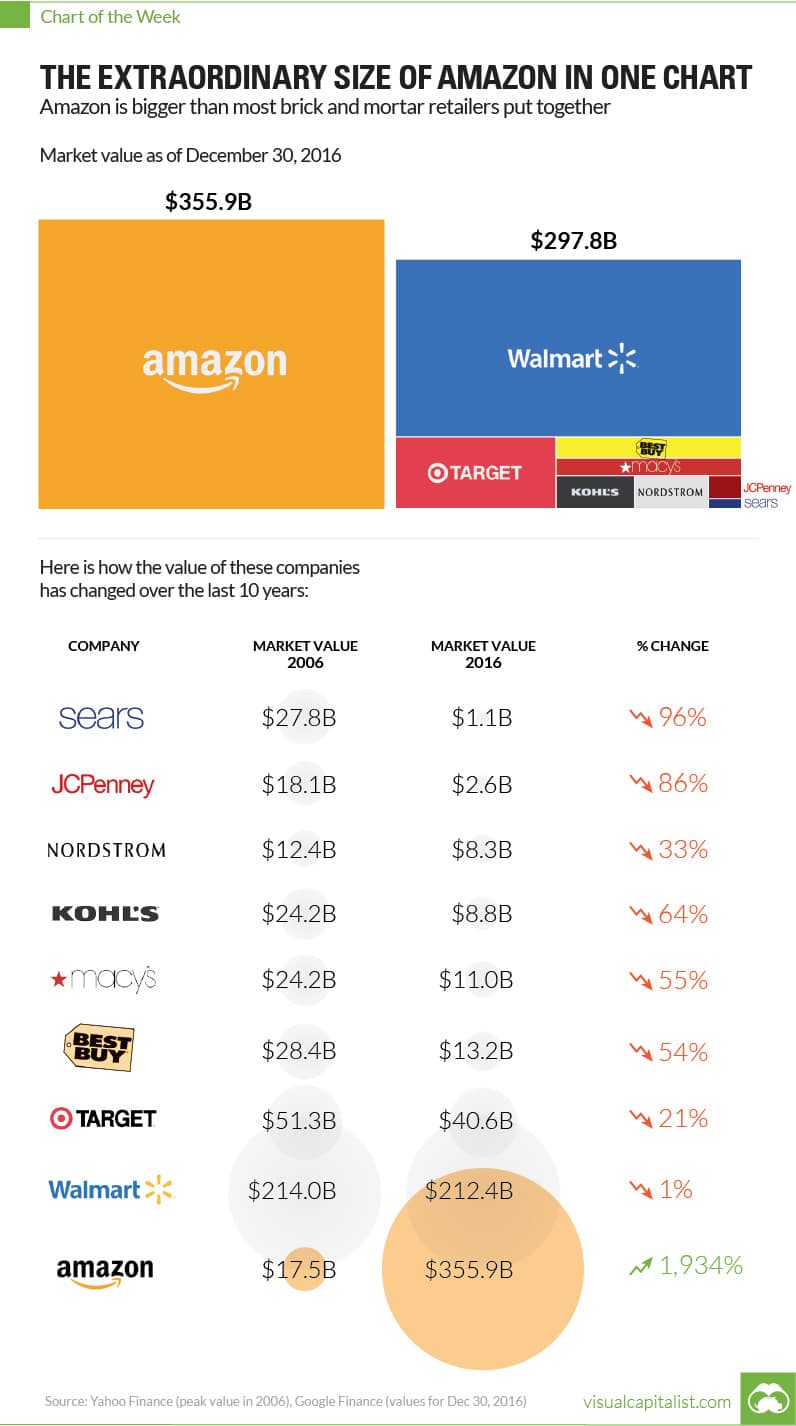 Disruption is nice as long as it doesn’t affect the companies we are invested in. But when it hits an Industry as big as Retailers, it can be hell for the rest as they lose market share which in this case has been gained by a single online retailer – Amazon.
In late 2016, a chart that showcased how much market capitalization has changed over the last 10 years. In the first 5 months of this year, the losers have gone even lower while the winner has gained another 30%. 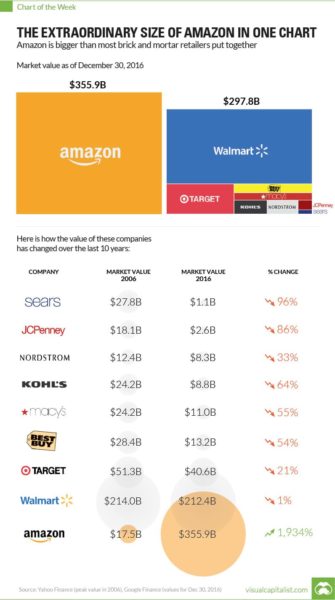 India saw disruption in the Automotive scene in 1983 with the Arrival of Maruti Suzuki. The earlier market leaders – Hindustan Motors (“Ambassador”) and Premier Automobiles (“Premier Padmini/Fiat”) were soon consigned to the pages of history.
Today Maruti Suzuki commands 52% of the Indian passenger car market. The company is the 11th largest company in India, by market cap. But the Indian Car market is predominantly based on Petrol / Diesel as fuels. While all companies combined sold 2.75 lakh vehicles in the month of April 2017 alone, just 1000 units are of the “Electric” variety.
But what if by 2030 (13 years from now), no gasoline based vehicles are even sold? Who will be the winners and losers?
Tony Seba, an economist with Stanford University recently came out with a study predicting such an eventuality. Even in the land of the free, Electric Cars haven’t really set the market on fire. Tesla for instance sells just 0.76% of what is sold by General Motors.
Then again, if we were to look at the journey of retailers in US when Amazon first appeared on the scene, it would be no different. Disruptive growth has a hockey stick pattern. While it seems slow at the start, the high growth overcomes every other hurdle that the competitor could have thought of.
If anything, what this tells us is that as investors, we need to be agile to the shifting ground and not root based on history.
Any such disruption will not only impact Automobile companies but also companies such as Oil Producers / Distributors, Auto Ancillary manufacturers among a host of others. On the other hand, we will have a new set of Winners as well, Companies that take advantage of the disruption.
Tony talks about a few changes we haven’t even noticed:

Go ahead and take a look at this post for who know how fast this reality may set given the advances we are seeing in Battery Technology and reduction in cost thanks to scale manufacturing.
Read on: Rethinking Transportation 2020-2030
(Here’s an older video on Seba presenting his ideas) 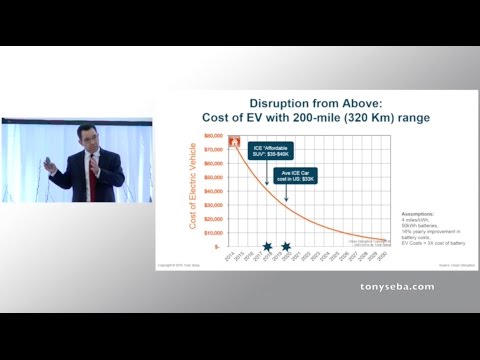 Note: How Does It Affect India?

India’s had its love affair with oil – petrol and diesel form a big reason why our trade deficit is high. If we were to adopt electric cars like the west, we would simply invert that statistic.
But for that to happen, big changes need to happen in transmission of electricity to the “last mile”. Petrol is available nearly everywhere. But electricity is not. In fact diesel generators are sold in large quantities, and so are inverters. Fixing electricity distribution will disrupt these industries first, before transportation.
Car companies will have to adopt, but they are facing challenges anyhow. Just five days ago, GM decided to stop sales in India. The rest will just move to electric. The biggest move can be in the motorbike space – if the Hero Motocorps and the Bajaj’s of India invest in good quality electric charging infrastructure for the public. (Imagine if, in every petrol pump, you could have a standard electric charger/supercharger initially funded by Hero/Bajaj, for their bikes, paid at a Rs. 50 per recharge)
Indian cities will take years to adapt. Decades. Because unlike horses, the current set of vehicles in cities have no real disadvantage over the electric car. The electric car isn’t faster (nothing is faster in Indian traffic) and its costs aren’t prohibitively larger (like horses were). We’ll take our time, and while the presentation is quite persuasive, the western world might still be a slowpoke. But the opportunity for disruption in ripe, and you never know how that massive move in batteries (and solar) might remove for us the very need of an electricity company. Change is the only thing you can be sure of, but exactly what changes is only known with time.