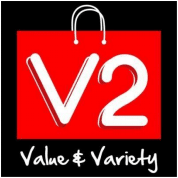 V2 Retail earlier known as Vishal Retail was incorporated in 2001 by Ram Chandra Agarwal. The company came out with an Initial Public Offer in 2007 at about Rs. 270 per equity share. In a way, this Initial Public Offer was forced due to its agreement with Bennett Coleman & Co. Ltd (Times of India) who held 11% stake in exchange for advertisements.
Markets in boom mode helped sail the issue through an oversubscription of 70 times. The stock closed the listing day at a price of 752 resulting in a 170% appreciation for those lucky to get an allotment.
Just a few days after Nifty 50 made its ultimate top, the stock too topped at 1000. In the ensuing few months though, all hell broke loose as the stock tumbled 95% from its peak.

Retail is a business with very low margins and high volume. The breakneck expansion that Vishal Retail had seen over the years was seeing it getting caught in the tornado of the Century. Vishal was expanding rapidly with debt being added on the way. The game plan was to take debt to grow, then sell enough shares and reduce the debt burden, and repeat.
The market fall of 2008 put paid to all that hope. With rising operating costs and not enough revenues, Vishal posted its first operating loss for the year ended March 2009. Borrowings took interest payments up 150% over the last financial year. This made it a bad-asset on bank books and the company was in trouble.
In 2010 the company sold off the Retail trading business to Shriram Group while the wholesale business, institutional sales and franchise operations were picked up by TPG Wholesale. The outstanding debt was also restructured under Corporate Debt Restructuring (CDR).
The CDR agreement also required that a large chunk of the promoter holding were pledged to banks as personal guarantee till all the liabilities were paid out by the TPG Group. These pledged shares only get released in 2018.
Once the deed was done, the company free of major burdens but still left with a few assets (few wholly owned stores and a small land parcel in Dehradun), the company renamed itself to V2Retail and sold the properties to start its second innings.

The second innings has been a much cautious one compared to its first. While the first innings was one of aggressively opening new stores, in the second avatar, they have been a lot slower as well as smaller (in size of store) helping the company keep the debt in check.
The company was able to claw back to the green in 2014 and while the quarterly profit numbers have been volatile, they haven’t seen a negative quarter since June 2014. 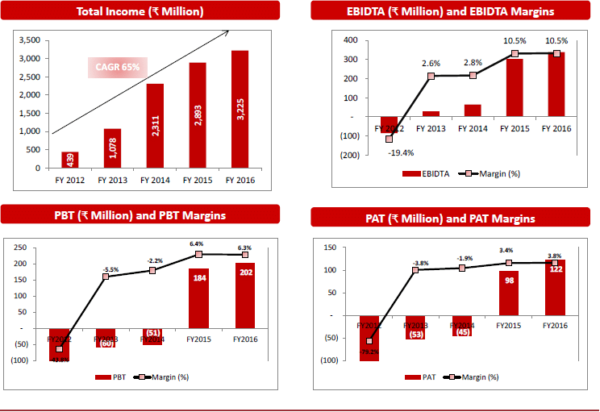 As the charts from the Investor Presentation by the company shows, the trend has been better in recent years. Debt which peaked at 766 crores in 2010 has substantially reduced and now stands at 97 crores.
Interest as percentage of its Operating Profit stands at 30% which while a bit on the higher side is still sustainable.

The issue really is that this is a very volatile stock, and can easily rise or fall 50% in a short time. There is some mistrust of the promoters in the marketplace, and that is exacerbated by the high number of pledged shares (people assume the company is in trouble).

Warrants: Is There Something Going On?

V2Retail has issued about 50 lakh warrants convertible to shares, to promoters and a brokerage group.
One of the preferred ways of promoters to hike their stake in the company without having to invest the total amount required is by issue of preferential convertible warrants.
First, this allows the promoter to buy a large chunk of shares at a single price point. If they try to buy that much in the market, the price moves up too fast against them.
Second, they don’t need to pay the full amount. Warrants require the buyer to put in just 25% of the money while the 75% of the payment can be made at the time of allotment subject to a clause that this conversion shall happen within the next 18 months.
The only risk is that if price falls and the buyer is not interested in converting, he will need to forgo the advance paid.
V2Retail has some very interesting history when it comes to warrants / Equity Shares that have been issued.
In March 2014, the company issued 39,52,720 warrants convertible into equity shares of the Company to Mr. Akash Agarwal, who is the son of the Promoter Mr.Ram Chandra Agarwal through preferential issue of convertible warrants. As on date, Akash Agarwal holds 24,88,750 equity shares and no outstanding warrants. (Essentially, all the warrants weren’t converted)
Remember the reason for the IPO (Bennett Coleman & Co)? Well, they lost half of their investment and exited the company in 2010 – 11. In 2015 they made a comeback of sorts : Bennett Coleman & Co was once again issued One Convertible Warrant for a price of 32.50 Crores on a preferential basis.
This warrant had the option for conversion to equity shares at either a minimum price of Rs.39.62 or 85% of the average weekly high and low of the 26-week volume weighted average price of the share.
In January of 2017, Bennett Coleman & Co were allotted 20,35,065 shares at a conversion price of 79.85. Remember, they invested 32.50 crores.  But this allotment was for a value of 16.25 Crores (50% of investment). Interestingly, they allowed the other half to lapse. Effectively, the acquisition price for Bennett Coleman & Co comes to Rs.159.70. Market price on the day previous to the allotment was 121.85.
This rapid warrant allocation feels “shady”, in the sense that it’s forced dilution on shareholders. But the most tricky one happened recently.
At the Board Meeting held on 22nd November 2016, the company decided to allot,

While it’s understandable when a company allots shares to promoters, it’s interesting when the same is given to outsiders. Who are these gentlemen and what do they bring to the table that required the company to issue shares at this price?
The 10 day average volume of the stock on that day was around 1.15 lakhs. In other words, it would have been way tough to acquire 30 Lakh shares from the market without moving the price a whole lot.
A big problem that the Income tax department has recently identified is where brokers take “preferential allotment” and then rig up a small cap share to make massive returns. This is then used to lure other investors in, the brokers exit (typically after a year) which then results in big non-taxable gains to the brokers. They’ve identified many such “penny stocks” (see link) This is usually used to convert black money to white.
The persons named Lodha/Bhargava seem to be Brokers, and don’t seem to have any special relationship to the company. Strangely, the promoter company (point 4 above) has not yet converted its warrants to shares.
The fear is that there is something black in the mulligatawny. The stock is already at 3x the price of conversion. The frequent warrant conversions / Equity allocations don’t seem to have a great feel to them. There is the risk that an income tax investigation might hit such warrant owners and the company itself. And if that happens, and there was something wrong, the shares of the company are likely to crash.
Another big risk is if and when these investors decide to sell their holding (after one year) it could have an impact given that they hold 9.69% of the total equity capital of the company. The stock is very highly volatile having seen multiple draw-downs of 50% or greater (from the peak).
Finally there are some financial statement risks. There’s about 200+ cr. of deferred tax assets (past losses that can be set off against current profits). If the company hits losses again, these tax credits will lapse and hurt the profit of the company. There’s also other auditor qualification of results, in terms of unknown liabilities of 48 cr. (they are fighting governments in court) and about 3 cr. which they can’t seem to reconcile. These seem minor, for now. 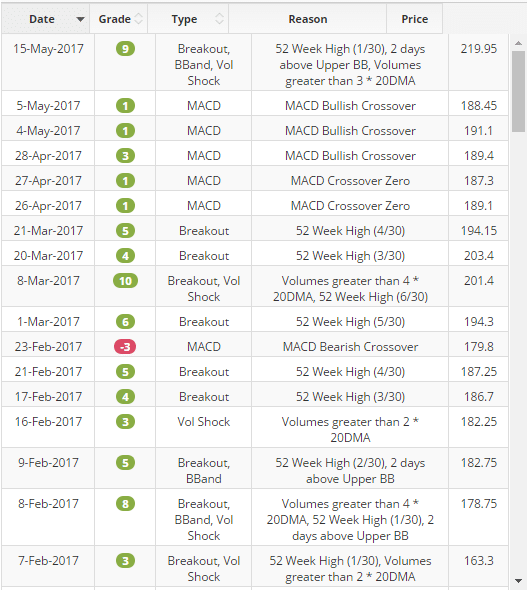 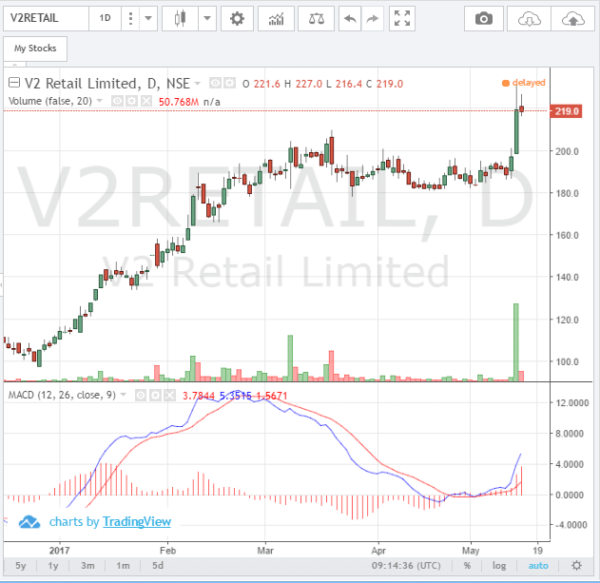 We do not necessarily “recommend” stocks in the “Outlier of the week” posts. As a disclosure though, authors may own shares of stocks even if we do not carry a buy-recommendation. This is not a buy-reco for this stock. It’s just a note that helps you understand the story.
V2Retail seems to be turning around now. The P/E today is still at 20, and if it continues to work its numbers up. Remember here that there’s a small chance the good results in December were due to demonetization (people rushed and bought everything in malls and retail stores with their cash). But hoping that wasn’t the case, a good strong move back will rerate the company substantially.
There are some serious risks in all those warrant based dilution and paying for advertisements through stock issuances. And of course risks of further audit qualifications.
In this market everything smells good, so you have to be aware of the risks before you take an investing decision.